“I feel that architecture has always been taste (…). I now think in terms of pleasing myself and not reforming society about the impact of my work” (Philip Johnson) 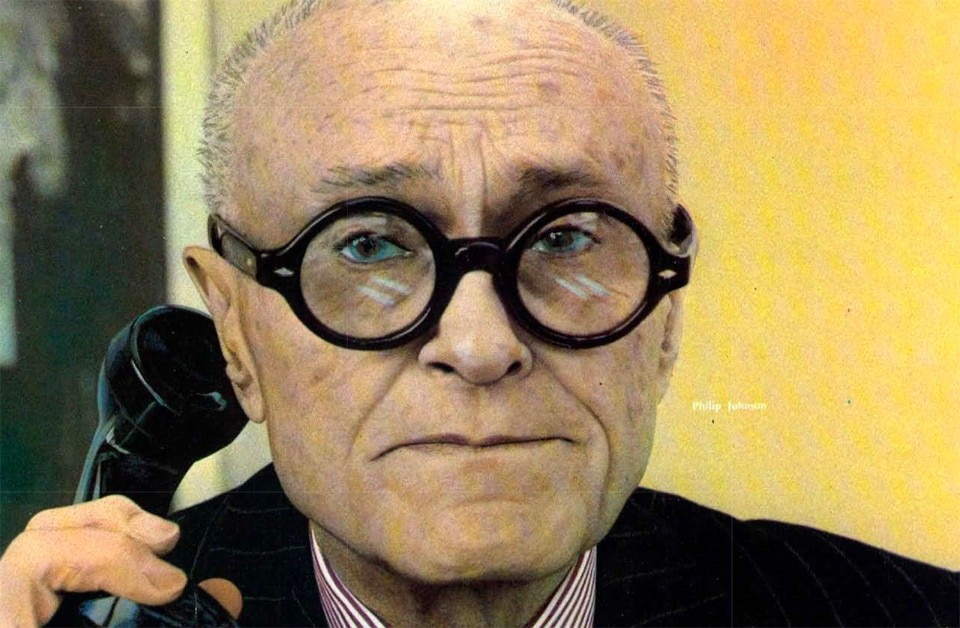 Powerful and surprisingly long-lived, all along the 20th century Philip Johnson (Cleveland, 1906 – New Canaan, 2005) was a protagonist (or even the protagonist) of world architecture. A true star architect, before its time, he was awarded the very first Pritzker Prize in 1979.

Through his activity as a critic and a curator, he acted for decades as a deus ex machina, able to determine the success or the oblivion of this or that designer, this or that movement. Furthermore, the ensemble of his works provides a virtually overarching presentation of all the architectural styles that have come and gone through his more than seven-decade-long activity. It is not by chance if “eclectic” is the most commonly used epithet when referring to this brilliant, and yet controversial, character.

Read also: Realized to celebrate the 110th anniversary of Philip Johnson's birth, Dots Obsession-Alive, Seeking for Eternal Hope by Yayoi Kusama is a triumphant statement about the power of art to transform pain into beauty and meaning.

The former was a broad presentation of works from the Modern Movement, with the clear intent to select the International Style’s features, and establish it as the one and only style of architectural modernity. The latter literally “invented” the deconstructivist movement, gathering around this definition a group of architects from different generations and backgrounds, though all very successful: Coop Himmelb(l)au, Peter Eisenman, Frank Gehry, Zaha Hadid, Rem Koolhaas, Daniel Libeskind and Bernard Tschumi.

Philip Johnson started his career as a designer at a relatively advanced age. In the 1920s he studied both philosophy and law in Harvard, but towards the end of the decade his encounter with Russel-Hitchcock steered his interests towards architecture. In 1941 he enrolled at the Harvard School of Design, where he counted Marcel Breuer and Walter Gropius amongst his masters. A few years later he designed the most significant of his modernist works: the Glass House in New Canaan, Connecticut (1949), the first of a long series of constructions that he realized within the same estate.

Philip Johnson’s relationship with Ludwig Mies van der Rohe was crucial in this phase of his career. The Glass House clearly drew inspiration from the German architect’s coeval Farnsworth House (1945-1951), though introducing several variations to its model. A comparison between the two buildings helps to understand the distance between the European “master”, a spokesperson for an ethically and socially oriented prewar Modernism, and the American pupil, embracing its aestethics more than its utopian momentum. Johnson collaborated with Mies van der Rohe on the project for New York’s Seagram Building (1958), where he realized the interiors of the Four Seasons Restaurant (1959).

The masterplan for the Lincoln Center, an art and cultural district in New York’s West Side, as well as its State Theatre (1964), can be considered as an arriving point of Philip Johnson’s modernist period. Meanwhile, his partnership with John Burgee, established in the late 1960s, marked the opening of his prolific postmodern season. Between the 1970s and the 1980s, Johnson and Burgee significantly contributed in the transformation of several large and medium-sized American cities’ downtown landscape.

The IDS Center in Minneapolis (1972), Pennzoil Place (1976), the Republic Bank Center and the Transco Tower (1981-1984), all in Houston, the Pittsburgh Plate Glass Company headquarters (1979-1984) and the sensual Lipstick Building in New York (1986), where they site their headquarters, stand out amongst the many skyscrapers that they built in this period. The experimentation on the curtain wall, a thread link between these and dozens of other high-rises, attained one of its most interesting achievement with Garden Grove’s Crystal Cathedral (1980), a multifaceted prism entirely clad in glass panel. Interestingly enough, though, the most renowned of Johnson’s skyscrapers from the 1980s is a solid monolith in red granite stone: the l’AT&T Building in New York (1984), also deeply postmodern. It was mostly thanks to its crowing, a bewildering incomplete pediment, that the building became an icon of an age and a style.

Philip Johnson dissolved his association with Burgee in 1991, but he continued his activity until the end of the millennium. One of the most intriguing of his latest works is the Visitor’s pavilion in New Canaan (1995), one of the most recent additions to his estate. It’s a parametric and deconstructivist experiment, an ultimate demonstration of his author’s uttermost stylistic versatility.

Dear Philip Johnson, it seems to me that you are the needle in the weighing-machine of architectural culture in the world today. If we go on at this rate you will end up by being more decisive, in the history of modern architecture, than your own Master, Mies van der Rohe