“It's not new that architecture can profoundly affect a place, sometimes transform it. Architecture and any art can transform a person, even save someone.” 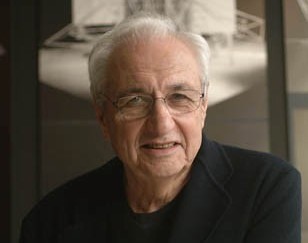 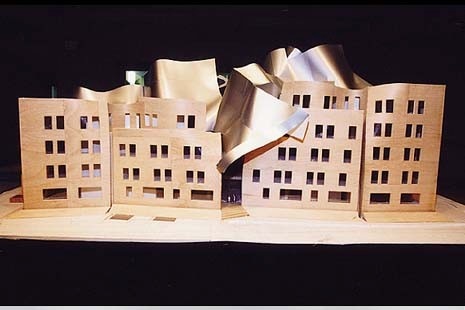 Ephraim Owen Goldberg, known as Frank Owen Gehry or simply Frank Gehry, is considered to be one of the most important representatives of architectural deconstructivism, due to his widely demonstrated interest in a process of breaking down buildings into volumetric units to then reassemble them according to apparently illogical criteria which favour oblique lines, and often made with combinations of diverse and unusual materials – from metal netting to undulating sheet metal, to complex titanium-based alloys – according to practices which recall techniques such as collage.

Gehry, who was born in Toronto in 1929, moved to the USA early in life, where he graduated in architecture in 1954 from Southern California, and where he earned a diploma in urban planning from Harvard University. On completion of his studies, he began working with the Viennese architect Victor Gruen. After a stay of about a year in Paris, during which he studied Le Corbusier’s later works, as well as French and German Romanesque cathedrals, he returned to the USA and in 1962 opened his first professional firm.

He soon became a famous name in the revolutionising of the typical American detached home in 1970s and 80s California through numerous examples which were very well-received by both critics and the general public. One product of this initial phase was the house for his own family in Santa Monica (1978), in which an obscure and modest pavilion building was integrated into a new U-shaped structure based on an informal and essential style which made use of unfinished, recycled and industrial materials.

The kitchen floor is in tarmac, the external classing is in sheets of tin and plywood, the handrails of the numerous walkways in the sleeping area are oblique cages in chicken wire. From the outside, these materials reach into the house, creating a kind of domestic post-apocalyptic landscape which Gehry himself has described as “cheapscape” and which was used again for the Familian home in Los Angeles (1978), the Wagner home in Malibù (1978), and the Spiller home in Venice (1978-1979), for the Los Angeles home of a cineaste (1981) and for his first non-residential projects, including the plan for the new buildings of the Loyola Law School (1978-1991), which reflected on the theme of open spae as a model for the complex. This immediate success led to Gehry being invited by Paolo Portoghesi to design one of the façades of the “Strada Nuovissima” at the 1980 International Art Exhibition in Venive, which took the form of a post-modern interpretation of the traditional American balloon-frame construction, used to frame a hypothetical low-arched window for the Venetian Arsenal.

The Loyola campus marked a turning point in Gehry’s career and saw him progressively shift the focus of his work. In the mid-1980s, he built the Yale Psychiatric Institute (1985-1989), the Edgemar shopping centre in Santa Monica (1984-1988), the Aerospace Museum in Los Angeles (1982-1984), all works which focused on the social and urban role of internal and external roads and squares which are conceived as theatrical settings.

See also: "Frank Gehry: I have an idea"

The next change was marked by the first one-man show dedicated to Gehry, which took place in Minneapolis in 1986 and for which the architect himself designed the layout. The event was an extraordinary media success, allowing the Californian designer to reach a vast audience, even winning the prestigious Pritzker Prize three years later. In the meantime, Gehry had begun work on the construction of the Vitra Museum in Weil Am Rhein in Germany (1987-1989), which marked another change in direction. In the rectangular building, accessory elements such as ramps, stairways, skylights and canopies generate an apparent clash of parts which is projected into the surrounding space. The collage of materials characteristic of the houses in California were replaced by the single element of white plaster (which Gehry had already used in the design for the Francis Goldwin library in Hollywood, 1983-1986) and attention shifted to the spectacular lighting effects connected to the introduction of secondary sections, which - put all together - provide one of the first examples of Gehry’s architectural sculptures inspired by the plastic futurism of artists such as Bocconi, a style which was to be applied to all of the works from the 1990s.
Buildings from this period include the American Centre in Paris (1988-1983), which introduced the theme of the extruded cylinder.

This was followed by the extraordinary impact of the Walt Disney Concert Hall in Los Angeles (1988-2003) and, above all, the long and complex construction of the Bilbao Guggenheim (1991-1997), the work which contributed to revolutionising the concept of the contemporary museum as a work of art in itself and as a driver for urban re-qualification for severely degraded areas (in this specific case the decommissioned quays of the river port on the Nervion). The Guggenheim, which can be described as a kind of titanium spaceship which has landed on the banks of the river, is undoubtedly an emblem of the 20th century, for which Gehry developed a new design approach which he was to perfect over the years to come. Sketches and simple models are used to verify the three-dimensional effects of the initial design ideas and, once the best solution has been identified, these are transformed into two-dimensional drawings with the use of complex software derived from the designing of aerospace equipment. These drawings are in turn the foundation for further trials and modifications in order to adapt the internal spaces to the general volume shaped with the models.

The international success of the Bilbao operation allowed Gehry to complete countless other projects. Among those inaugurated in recent years are the Gehry Tower in Hanover (2001), Issey Miyake in New York (2001), Maggie’s Centre in Dundee, Scotland (2003), the Ray and Maria Stata Centre in Cambrisge, Massachusetts (2004), Brian Transeau’s House in Los Angeles (2006), and the InterActiveCorp-IAC Headquarters in New York (2007).

As well as the previously mentioned Pritzker Prize, Gehry was the first architect to receive the Dorothy and Lilian Gish Award (1994), and in 2008, the Golden Lion for his career during the eleventh International Architecture Exhibition in Venice. For the city of Venice he designed his first Italian work, the Venice Gateway, a sea terminal for the connection between Marco Polo airport and the centre of Venice.

A final mention goes to the construction of the Guggenheim museum in Abu Dhabi, the latest ring in the chain of franchise museums which Gehry himself has contributed to creating through the Bilbao experience.

In the words of Italian critic Fulvio Irace: “Frank Gehry has a rather unorthodox past as an architect, feeding on unconventional passions for art and for life which are progressively reflected in the expression of a highly extreme style. Fascinated by the visual “dirtiness” of the city [...] the architecture of his homes was the cry of freedom in a war of aesthetics which celebrated ugliness. The ordinary and the banal as ingredients of a cheap beauty, like the charm of a grunge-style Cinderella dressed in rags.”