“I have always been interested in the concept of fragmentation and with ideas of abstraction and explosion, de-constructing ideas of repetitiveness and mass production” (Zaha Hadid, 2007) 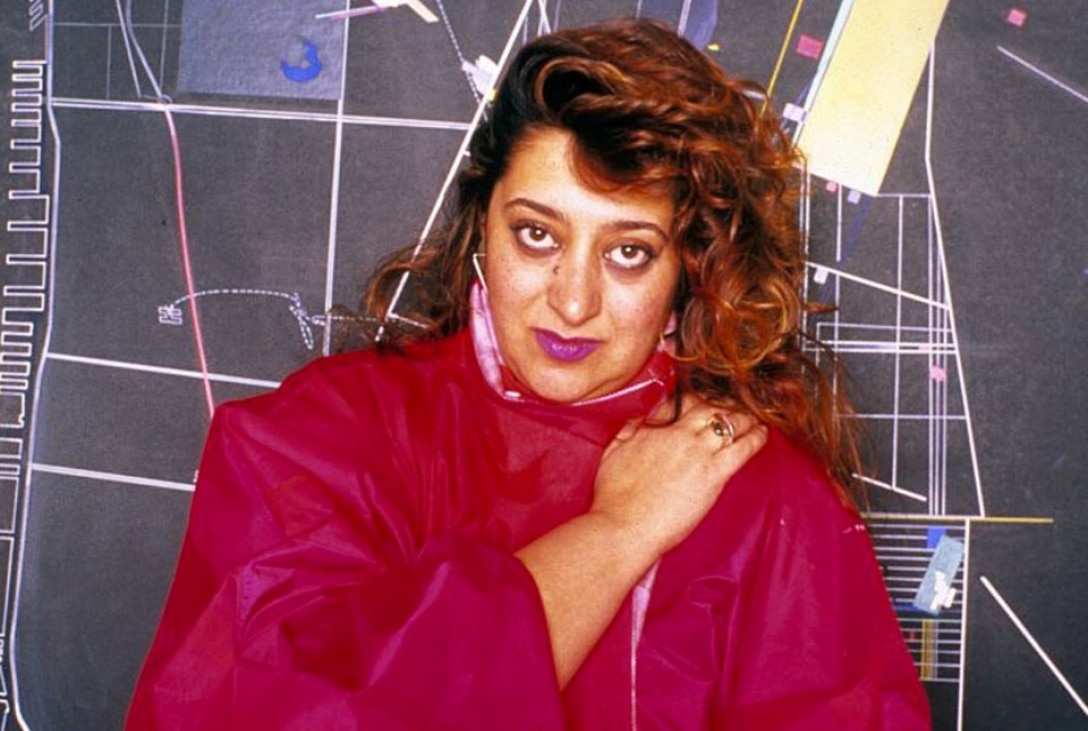 Zaha Hadid (1950-2016) is considered to be the most important architects of this era. As an achitect of international fame, the first woman to win the Pritzker Prize in 2004, Hadid actually began her career as an artist and was often involved in the design of furniture and products.

My work first engaged with the early Russian avant-garde; in particular with the work of Kasimir Malevich – he was an early influence for me as a representative of the modern avant-garde intersection between art and design.

Born in Baghdad in 1950, she studied mathematics at the American University in Beirut before emigrating to England in 1972 to attend courses held at the Architectural Association. Here she met Elia Zenghelis, Rem Koolhaas (who was a founding member of OMA – Office for Metropolitan Architecture), Bernard Tschumi and Leon Krier, often cited by Hadid as her mentor alongside El Lissistsky and, above all, Kazimir Malevich.

After graduating in 1976, obtaining her degree with a thesis on the theme of inhabited bridges and proposing a project entitled “Malevič Tektonik”, she continued in the Architectural Association as a teacher until 1987. London also saw her debut on the international scene, where she gained early success with the exhibiting of a large number of paintings depicting environments of a constructivist influence produced from the 1970s onwards.

These were visionary scenes which, in hindsight, can be read as evidence of the pivotal role that drawing always played in Hadid’s creative process. It was again in London in 1979 that the Anglo-Iraqi designer founded her first firm, called Zaha Hadid Architects (ZHA).

The early years saw a number of important projects, many of which never went beyond initial drawings, once again inspired by the language of the 1920s, from the design for “The Peak” in Hong Kong (winner in 1983 of an international competition which saw the participation of more than fifty architects), to the Kurfürstendamm  in Berlin (1986), and the unfortunate case of the Cardiff Bay Opera House (1994). These were all works in which Zaha Hadid’s interest was in the reduction of architecture to its pure and essential elements, integrated into the natural topography thanks to highly-complex artificial systems and studied with the application of cutting-edge construction techniques in order to create new urban landscapes.

However, from the beginning of the 1990s, Hadid’s form of expression began to rapidly move towards that which was to become one of the dominant themes in everything she produced, not only architecture; the movement which is often seen as the representation of a flow (of users, or of light, for example) moving through space and creating forms which appear to be far removed from Euclidean geometry.

Of particular visual impact, this style was initially used in designs such as the fire station for the fire brigade of Weil Am Rhein in Germany – inaugurated in 1993 and the first building to be effectively entrusted to Hadid – or the Hoenheim-Nord Terminus in Strasburg (1999-2001), to then reach a peak with a number of the most controversial works of our century, many of which can be found in Italy.

There is the MAXXI in Rome, as well as the Rosenthal Contemporary Arts Centre of Cincinnati, her first project in America (which opened in 2003), in which the road leads right up to and into the building, becoming the spatial fulcrum around which the sections and paths of movement for the entire complex are organised; the Salerno Maritime Terminal (2002-2012), where – according to Hadid – the quay “rises gently, reflecting the series of ramps which lean progressively towards the interior of the building via and provide the passengers with access to the boarding platform”; the Aquatics Centre, constructed in London for the 2012 Olympics, the outer shell of which is inspired by the fluidity of water in motion; the Guangzhou Opera House in China (2010) or the Heyday Aliyev Centre in Baku (2013).

Italian writer, designer and Domus contributor Stefano Casciani describes the MAXXI in Rome as "a monument to contemporary, a sense of endless virtigo".

The latest was the very recent train station for the Naples Afragola high-speed line, a posthumous work which was inaugurated in 2017 (a year after the designer’s death), in which yet another spectacular form of architecture becomes an urban landmark for the chaotic area to the north of the city, with a structure which slowly emerges from the ground, bridges the railway lines and forms a spatial continuum in which one can move freely.

Similar architectural complexes have often called for careful reflection on the theme of the most up-to-date construction materials, a field in which ZHA has produced some interesting experiments, with Italcementi for the MAXXI in Rome and the Italian Pavilion at the Shanghai Expo (which led to the filing of a patent for transparent cement), but also through research carried out on Corian in collaboration with DuPont for both the Afragola station and the Z-Island, a single-piece kitchen which was presented at the Milan International Furniture Fair in 2006.

"Hadid belongs to a generation of designers who trained under the guidance of professors who could not – or who preferred not to – build. For them, architecture was confined to paper, it was critical speculation on its destiny and its role in a hostile climate. Hadid’s greatest achievement was to have changed this situation. The avant-garde are still wary of the compromises that building in the real world calls for, but her recently-opened Contemporary Arts Centre in Cincinnati is convincing proof that her explosive vision of space is capable of becoming – without in any way compromising her ambitions – true architecture which is functional for a specific place and specific role."