“To become a ‘machine’, basically every mechanism needs a body, that is, the outer ‘furniture’ with which to express and organize itself so that it can be comprehensible to us and enter into a relationship with us and our domestic landscape” (Mario Bellini, 1987). 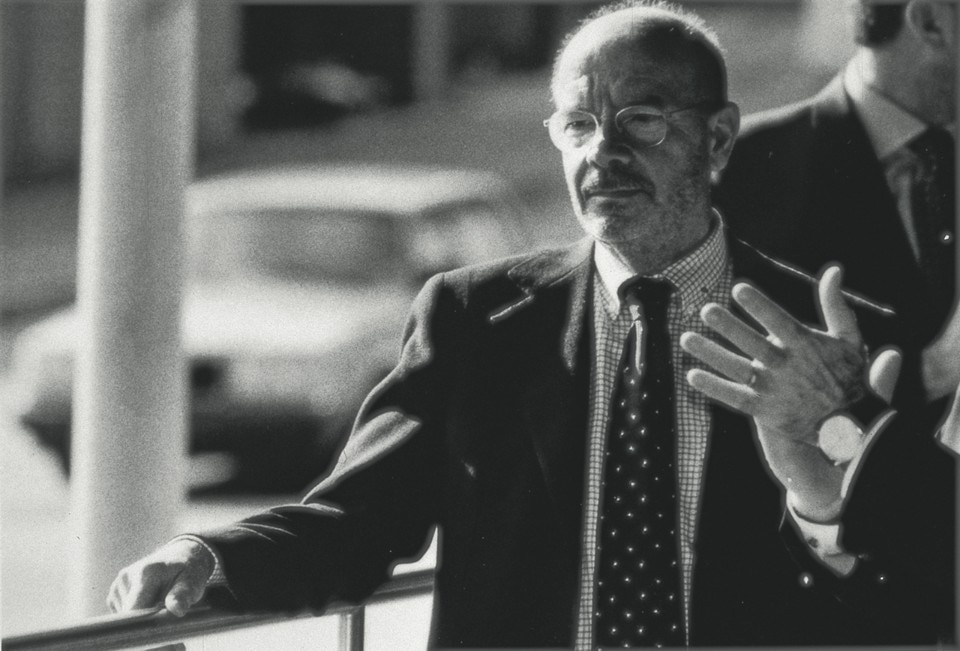 Mario Bellini (Milano, 1935) is considered as one of the most important Italian designers from the 1930s generation. After obtaining his master in Architecture at Politecnico di Milano, in 1959, he follows a similar path as many of his peers. He approaches in the first place the field of design, and shifts to the scale of the building and the city at a relatively late stage in his career.

Bellini’s establishment on the Italian and the international scene is linked first and foremost to his long lived collaboration with Olivetti, which he joins in 1963 as chief consultant for design. Among his several objects for the Ivrea-based company, the most surprising is probably the “Programma 101”, which is commonly regarded as the first personal computer in history. Bellini models a straightforwardly futuristic bodywork for this revolutionary product, engineered by a team lead by Pier Giorgio Perotto and launched in 1965. Just as momentous is the “Divisumma 18” electronic calculator (1973), whose integral soft rubber finish has no precedent.

Read also: The exhibition at the Triennale in Milano is a tribute to the remarkable, many-sided work of the Italian designer, opening exactly 30 years since the show devoted to him by MoMA.

On May 26, 1972, the seminal exhibition Italy. The New Domestic Landscape, curated by Emilio Ambasz, opens to the public at the MoMA in New York. The Argentinian-born architect and critic summons twelve Italian designers to compose an “environment”, which shall be representative of their own vision of the domestic space. Gae Aulenti, Joe Colombo, Ettore Sottsass, Marco Zanuso and Superstudio are included in the selection, as is Mario Bellini, who obtains here a further international consecration as a leading figure of Italian design.

For the MoMA exhibition he conceives the memorable “Kar-a-sutra”, possibly the most iconic of all his projects. Bellini’s car reinvents the notion of roominess, by giving up the traditional single seats and inviting passengers to move freely over a soft, cushioned platform. The cabin is transformed into a moving house. The “Kar-a-sutra” is often described as the forerunner of the 1980s minivans, which will revive many of its solutions, while adapting them to large scale series production.

Bellini’s collaborations with major Italian and European firms multiply throughout the 1970s: for B&B he designs the “Le Bambole” sofa (1972); the “Cab” chair for Cassina goes into production in 1977, and has been sold to day in more than 400 thousand copies; Artemide launches the “Area” lamp in 1970; and then Flou, Heller, Kartell, Rosenthal, Tecno, Venini, Vitra, and many others. In the same decade, Bellini continues his reflections on the automobile: since 1978, he works as a consultant for Renault, and in 1979 he designs the controversial dashboard of the Lancia Beta Trevi restyling. The latter is a one-piece of black polyurethane foam, with holes carved for each dial, according to a configuration that Bellini himself famously defined as gruyere-like.

Leggi anche: Interviewed for #domus1000, Mario Bellini – Domus editor from 1986 to 1991 – focuses on what, in his opinion, has forever changed the course of history.

In the 1980 he diversifies his activities. From 1985 to 1991 he is the director of Domus, replacing Alessandro Mendini after a short transitional period under the guidance of Lisa Licitra Ponti. The occasion for display design, mostly for temporary and permanent exhibitions, become ever more frequent, leading to the important commissions of the years 2010, such as Giotto. L’Italia (2015-2016) and Margherita Sarfatti (2018-2019), both at the Palazzo Reale in Milan. But most importantly, since the 1980s Bellini repositions himself more clearly as an architect and an urban designer, with a change of scale whose effects can be better appreciated in the second half of the decade.

Besides the Exhibition and congress center in the park of Villa Erba in Cernobbio, Italy (1986-1990) and the Tokyo Design Center (1988-1992), the most representative realization from this age are the New Portello Pavilions at the Milan Trade Fair (1987-1997). As most coeval projects by Bellini, they reveals multiple influences: postmodernist resonances, with the use of archetypal classic forms, such as the triangular pediment pointing towards the city outskirts; largely revisited memories of the Italian Tendenza, which unburdens the former from their most decorative and kitsch expressions; mild references to a hi-tech interpretation of the International style, showing for instance in the bridge structures, as well as in the staircases cylinders.

Starting from the 1990s and until today Bellini secures numerous relevant international commissions, including the Natuzzi Americas Headquarters in High Point, North Carolina (1996-1998), the National Gallery of Victoria in Melbourne (1996-2003), and the highly appreciated New Department of Islamic Arts of the Louvre Museum in Paris, inaugurated in 2012. And yet once again the leading lines of evolution of Bellini’s work can be better understood looking at a Milanese project. The MiCo, a congress center (2012) which extends the Portello pavilion, is a “comet” (in the words of Bellini himself) clad in more that 8 thousand aluminum sloughs. It is a shining, sculptural objects, betraying a growing fascination for the potentials of parametric modeling.

Bellini’s contribution to the fields of design and architecture is widely acknowledged by critics. Evidence of this are the two monographic exhibitions dedicated to him by the MoMA (Mario Bellini. Designer, curated by Cara McCarty, 1987) and by the Triennale di Milano (Mario Bellini. Italian Beauty, curated by Deyan Sudjic, 2017). Also in 2017, the Triennale awards him the Gold Medal for Italian Architecture, for his lifetime achievements. This adds up to the eight Golden Compasses that he received over several decades, in what remains today (2020) an unmatched record.

Read also: In 1972, Mario Bellini went on the classic coast-to-coast trip across the United States with his friends Francesco Binfaré, Vittorio Fossati and Davide Mosconi. Humboldt Books published a very personal narration of that journey.
Sign up for our Newsletter and get domus in your inbox

In the words of Marco Romanelli:

Mario Bellini undertakes the project-theme of a chair as emblem of a civilization. Of the Western civilization, that has chosen to sit on prostheses instead of squatting down, and that performs this gesture, since thousands of years, thanks to an object that has remained virtually unchanged: seat, back and four legs (…). [Bellini designs] a chair that resembles a chair, that thus is immediately recognizable, thus is easy to be remembered and possessed