“As far as I am concerned, it is not design that interests me: I use design not as a means to an end, but in order to carry out my natural vital role, which is to produce images.” 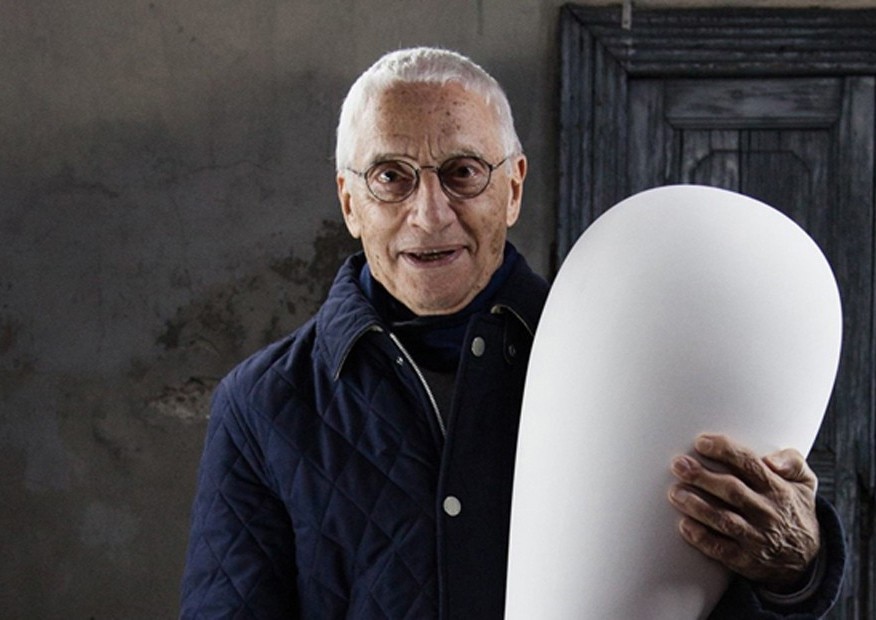 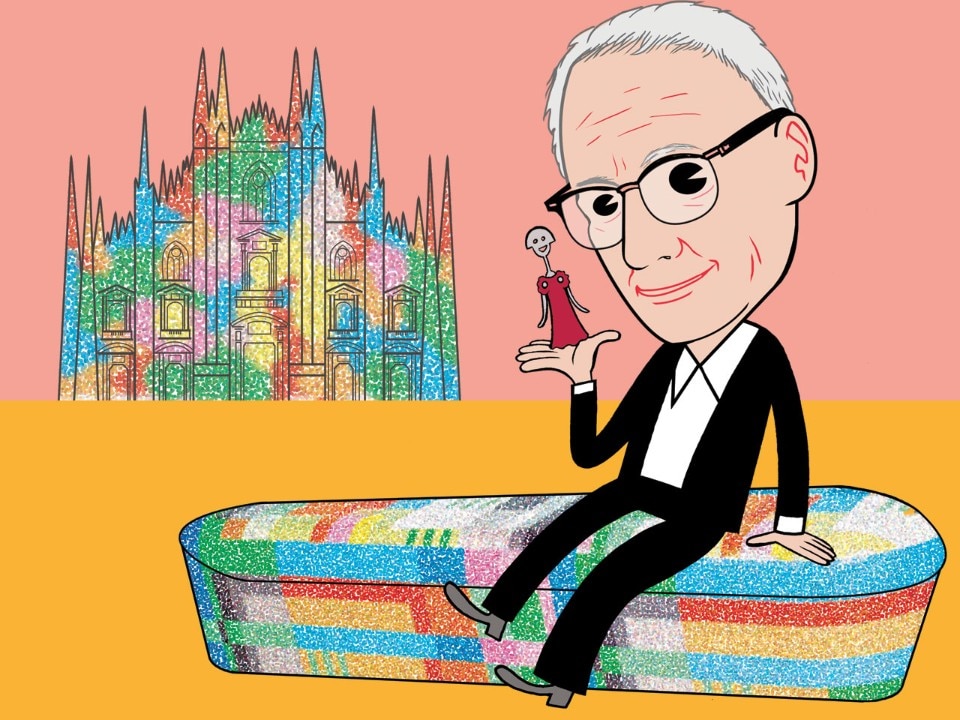 Alessandro Mendini was born in Milan in 1931 and graduated in the same city, at the local Polytechnic. He was initially associated with the Nizzoli studio (1960-1970), and is one of the most famous and appreciated contemporary designers, since the 1970s a leading figure in the resurgence of Made in Italy production, thanks to his involvement in numerous avant garde projects of the italian movement "radical design" (including Alchimia, one of the first centres of experimentation on the theme of decoration, which earned him a Golden Compass in 1981) and his tireless participation in theoretical debate.

He was the director of the magazines “Casabella” (from 1970 to 1976), “Modo” (which he founded in 1977 and directed until 1988) and “Domus” (1979-1985, 2010-2011), initially called to fill the role by Gio Ponti himself, who was due to leave having reached the age limit. His most celebrated works include “Paesaggio casalingo” (1979), “Architettura addio” (1981), “Progetto infelice” (1983), and “Existenz maximum” (1990), all occasions for Mendini to develop fundamental concepts such as “neo-modern design” (compared to 16th century Mannerism, which broke down the classic rules of design), “casa banale” (which recognise the value of the ugly and the kitsch in daily life) and redesign.

At the same time, he worked on his extraordinary and highly personal design career (in which he worked alongside his brother Francesco, with whom he founded, in 1989, Atelier Mendini) which saw collaborations with companies such as Zanotta, Alessi, Swatch, Philips, Venni, Bisazza and Cartier.

In the field of architecture, he designed the Groninger Museum (1988-1994, 2010) the Alessi factories and the Omegna Museum-Forum (1996), the Teatrino della Bicchieraia in Arezzo (1998), the urban regeneration of the Maghetti district in Lugano (1998), the renovation of the Termini Station in Rome (1999), the restoration of the Villa Comunale (1999) and three stations in the Naples underground network (2000),  as well as the new exhibition space and the new branch of the Milan Triennale in Incheon, South Korea (2008-2009).

Internationally recognised as a refined scholar of a sui generis approach to the object (be it a building or a design) which is rooted in the close relationship between art and design, with a particular focus on the use of colour, and a subtle and constant vein of irony, he was, from the outset, very critical of the consumerist society, and constantly walked the line between inspiration from, on the one hand, the world of literature and, on the other, the world of pictures and paintings that had accompanied him since his early childhood.

His were some of the most iconic moments in Italian production over the last sixty years, from the Proust armchair (1978), to the countless collections of objects designed for Alessi, a multitude of products which – as noted by the most recent and attentive commentators – retraces the obsession of Mendini's surrogate father Ponti for a very restrictive group of fundamental themes (the Ponti ideario) analysed in an endless and diachronic series of forms.

This took place through a practice which was typical of the artist: the construction of graphic and decorative patterns, seen as a direct sign of that which the designer himself defined as his “visual thought” and “vital role”.

The first few years of Mendini’s career saw the works which were later to be categorised as “objects for spiritual use” (the “Lassù” chair, the “Scivolavo” seat, the “Suitcase for the final journey”, all made between 1974 and 1975), which sought to move away from the usual intrinsic functionality of their nature: an item of luggage in stone which was impossible to lift, a chair so high it was necessary to climb up it, and another made in an unusual and off-putting form and size, all conceived to lead us to reflect on the transitory nature of both objects and human existence.

One-off pieces, proto-forms, often self-built pieces which were more like artistic performances, destined to a programmed destruction which challenged the concept of design as the sole satisfaction of the criteria of functionality and which, in reference to the traditions of the artistic forerunners of the early twentieth century (Dadaism and Surrealism), presented visual paradoxes aimed at provoking critical reflections on functionalism itself. This to such an extent as to render necessary a reform of the design system from within, setting up a school - Global Tools (1974) - which was short-lived, but which saw the participation of Mendini (obviously), of Archizoom, UFO, Superstudio, Gaetano Pesce, Ettore Sottsass, Ugo La Pietra and Gianni Pettena. A modern laboratory in Bauhaus style, which questioned the role of the architect and the designer as mere technicians at the service of mass economics, in favour of anti-specialist and anti-disciplinary figures who rely on multiple approaches which distance from consolidated tradition but maintain an artisan, hand-crafted dimension which is typical of Italian design.

These were the years of so-called counter design, during which time Mendini also began a reflection on the theme of redesign, seen as a new visual language which reinterpreted everyday objects. By intervening through superimposition or contamination on existing items, either anonymous or by known designers, through the use of colours or styles which were extraneous to the original concept, he reinterpreted the meaning in a light-hearted and ironic manner. Examples include the new shapes which suffocate the Wassily chair by Marcel Breuer (1978), or the coloured flags placed on top of the Superleggera by Ponti, which mockingly underlined its lightness, as well as the four anonymous 1940s dressers which were completely revisited through painting and collage applied to the entire surface and deriving from the figurative imagination of Futurism and Constructivism.

The summit of this process was the Proust chair, a totally mundane faux-baroque chair which was transformed into a tribute to the celebrated French writer by covering it with a pattern - painted directly onto the fabric and the wooden structure with a small brush and without a previously-drawn layout - which recalls the pointillist technique of Paul Signac. The redesign concept was summed up by Mendini in a famous statement.

He wrote in “Originalità del falso” (1997): “I both invent and copy, because in the pantheism of the enormous galaxy of merchandise, everything that I can possibly imagine already exists. What is important is that my forgery is original.”

In this aspect, the role of decoration is clear, and for Mendini it was to assume an ever increasingly central role because, unlike function, it is considered a stable and anthropological value with which humankind is capable of entering into an emphatic relationship.

In the 1970s, as previously said, objects were often self-produced, and it was not until a decade later, with Mendini’s encounter with real mass-production, that a true evolution took place. Of fundamental importance was the relationship that the Milanese designer formed with industrialists such as Aurelio Zanotta and Alberto Alessi, who encouraged him to overcome his initial conflict with the theme of one-off items. Thus, in the long period of time between 1981 and the first decade of the 21st century, numerous experiments with Alessi emerged, including the series of multiple artist designs entitled “Tea and coffee piazza” (1983), composed of micro-architectures for the table, and the diversified series “100% Make-up”. In the latter case, a single vase - the form of which was designed by Mendini himself - was decorated by one hundred different artists, architects and designers, and produced in a run of just one hundred items per type.

A total of ten thousand pieces, which attempted to overstep the intrinsic limit of anonymous industrial mass-productions through the introduction of decorative patterns which, instead, represented the individuality of each of the characters who were invited to personalise the vase. Another example were the famous corkscrews “Anna G.” and “Alessandro M.” which became almost theatrical characters, with a specific nature and a personal wardrobe.

The theme of deviation of size was instead re-examined in objects such as the “Mobili per uomo” designed for Bisazza in 1997. Containers which served as pedistals were topped with oversized reproductions of symbols of business success: a Borsalino hat, a briefcase, a coffee cup, which were all completely covered with microscopic mosaic tiles which - in the same way as the Proust armchair – dematerialised the overall image.

More recent years saw works such as “Visage Arcaïque” and “Tête Géante” (2001-2009), which examine the theme of anthropomorphism. Primitive geometric shapes (cubes, pyramids etc.) made with the widest possible range of materials and for various brands (Venini, Cartier, Bisazza again) are assembled to create giant heads which resemble human faces, and at the same time are a reference to the characteristics of Russian Constructivism.

Thanks to the undisputed value of his work, Mendini has been presented with numerous awards. He is Chevalier des Arts et des Lettres (prsented to him in France) and has received the honours of the Architectural League of New York, an honoris causa degree in design at the Politecnico di Milano and at the Ecole Normale Supérieure de Cachan, as well as the European Prize for Architecture awards in 2014.

In the words of architectural historian Fulvio Irace: “Seen together, Mendini’s furniture and architecture, designs, decorations and words all express this form of Sehnsucht that literary critics have historically attributed to romantic sensitivity: a never-satisfied desire united with the aspiration to a communion with nature and with a world that is perceptive and existential, rather than political or social. A melancholy view which projects onto reality a shadowy and autobiographical vision which feeds a personal and silent worship of memory.”