Starting from the 1970s, an ambiguous and diverse architectural trend rises from the ashes of the Modern Movement, rediscovering the languages of history as a source of inspiration and reintegrating them in the field of design. 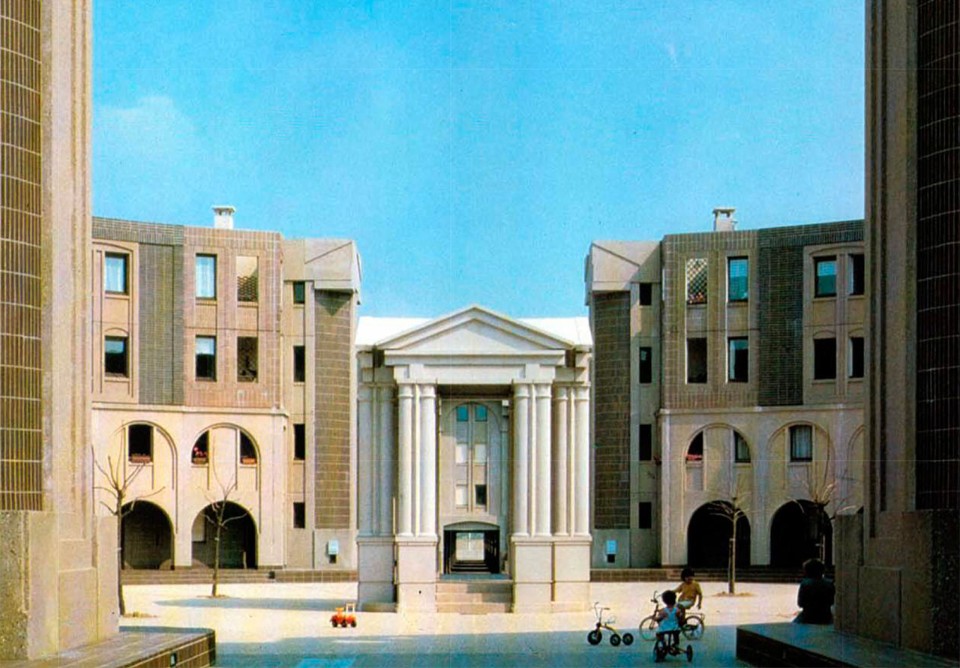 According to Charles Jencks (1939-2019), architect, as well as architecture historian and critic, the very beginning of Postmodernism corresponds to a destructive event: on March 16, 1972, the first out of 33 buildings of Saint-Louis’s Pruitt-Igoe neighborhood explodes and collapses to the ground, as a result of one of the most spectacular controlled demolitions of the entire 20th century. Completed less than 20 years before, in 1955, by American architect Minoru Yamasaki, and (too) rapidly facing serious deterioration, both material and social, Pruitt Igoe’s slabs are the icons of the broken promises of modernity, and more specifically of the unaccomplished visions of the Modern Movement’s designers. The utopia of a socially-oriented, democratic architecture has turned into the dystopia of dormitory towns; the avant-garde, inspired by the famous aphorism of the form follows fuction, and the related architectural style, have given birth to the atopic, generic, back-line International Style. It is precisely in light of these considerations that Jencks triumphantly claims that on that very winter day, in the US Midwest, “modern architecture died”.

Postmodernism is very often theorized and contextualized as opposed to the Modern Movement, against its dogma and constraints. According to French philosopher François Lyotard, the crisis of the “grand narratives” is the distinctive feature of the postmodern condition. Within this frame, the ideology of modern architecture, perceived as monolithic and suffocating, also splits apart. The first cues of this process already surface in the late 1950s, for instance through the well-known querelle about the Italian Neo-Liberty, backed by Ernesto Nathan Rogers’s Casabella Continuità but stigmatized by Reyner Banham on the Architectural Review as The Italian Retreat from Modern Architecture (April 1959).

Read also: Expansion, demolition, refurbishment and building speculation: postmodern architecture is under threat. Perhaps, as Denise Scott Brown maintains, it is “outdated without yet being old enough to be revalued”.

In the 1960s, Robert Venturi (1925-2018) is a leading figure of the postmodern turn: his essays Complexity and Contradictions in Architecture (1966) and Learning from Las Vegas (1972), the latter written with Denise Scott Brown (1931) and Steven Izenour (1940-2001), claim the right to a diverse, non-ideological architecture, which can “learn” and integrate even the pop vernacular from Nevada’s leisure city. In the following years, the features of Postmodernism will be further delineated by Jencks in his seminal book The Language of Postmodern Architecture (1977).

Furthermore, in 1980, on the occasion of the 1st International Architecture Exhibition at the Venice Biennale, Paolo Portoghesi (1931) curates the exhibition The Presence of the Past, whose catalogue is introduced by his text about The End of the Prohibitionism. After being ostracized for decades, the signs of the past, of history, are now available as materials for design. Disconnected from the consistent narratives which they once belonged to, they now prove extremely flexible and adaptable. Hence, the Strada Novissima, set up by Costantino Dardi (1936-1991) as the show’s main installation, provides an impressive catalogue of 20 postmodern façades, each one commissioned to a different designer. The solution adopted by Austrian architect Hans Hollein (1934-2014), reinterpreting the model of the classical column in various guises, is certainly one of the most representative.

In the words of Marco Biraghi: “Postmodernism presents itself as pluralist, and a guardian of diversity, fragmentation, ambiguity, multi-stratification; a supporter of dispersion, dissemination as well as accumulation, contradiction and proliferation of mere oppositions, stripped of any mutual connection; (…) and more, Postmodernism is inclusive, aloof, bewildering, far from any ideological fascination, unless is it inspired by strategical pragmatism”.

The imageries that postmodern architectures draw inspiration from are as multiple as their “stylistic” outcomes. Robert Venturi and John Rauch design subtly ironic and overtly irreverent buildings such as Philadelphia’s Guild House (1960-1966) and the Vanna Venturi House (1959-1964) in Chestnut Hill, destabilizing both the archetypal American “home sweet homme” and Le Corbusier’s dictates, for instance through the multiplication of window typologies. Philip Johnson (1906-2005), the undisputed, highly influential protagonist of the East Coast postmodern season, is the author of the AT&T Building (1979-1984) in New York, where the classic vocabulary is translated and simplified, in order to coat the maximized, liberal volume of an office skyscraper.

Michael Graves (1934-2005), just as powerful as Johnson and even more productive, follows the same path. Such designs as the Portland Public Service Building (1982), Oregon, and the Humana Building (1982-1985) in Louisville, Kentucky, disseminate and standardize the most historicist version of Postmodernism within the US mid-size cities’ downtown. New Orleans’s Piazza Italia (1975-1979) by Charles Moore (1925-1993) certainly deserves a special mention, as a public space literally stuffed with history-sourced signs and taking to its extreme the postmodern interpretation of architecture as a stage.

Read also: "Exhibiting the Postmodern", by Léa-Catherine Szacka, is a prodigious body of research tracing the path that catalysed a “decisive schism” in the architectural world: the conceptual shift from Modernism to Postmodernism.

On the other hand, the best European expressions of Postmodernism rely on a less nonchalant and more layered approach to the past. More than the Italian Tendenza, led by Aldo Rossi (1931-1997), whose interest in history stems from original assumptions, British architect James Stirling (1926-1992) stands out on the continent for its postmodern production. Still, in Stirling’s buildings, such as the Staatsgalerie in Stuttgart (1984), the frequent use of quotes results in the analogic juxtaposition of fragments, rather than in a mere applied decoration.

At the scale of urban design, Luxembourg-born Rober Krier (1938) and Léon Krier (1946), inspired by Camillo Sitte’s studies, consider urban morphology as the support for the rise of a communitarian dimension, while Catalan master Ricardo Bofill (1939) reflects on the possibility of a contemporary urban monumentality, which the Modern Movement seems to have given up. Speaking about his residential neighborhoods in the French banlieues, Kenneth Frampton refers to their beaux-arts-inspired masterplans and their exuberant neo-classic decoration in terms of a “Neo-Social-Realist megaclassicism, executed in pre-fabricated reinforced concrete construction”.

These are just a few examples of the variety of the outcomes of postmodern architecture. In fact, it is not by chance if Charles Jencks points out its “radical eclecticism” as its most distinguishing feature.