Two solo shows and a group exhibition between Italy and Germany offer viewers the opportunity to plunge into the work of the sculptor from Milan and retrace his fifty-year career. 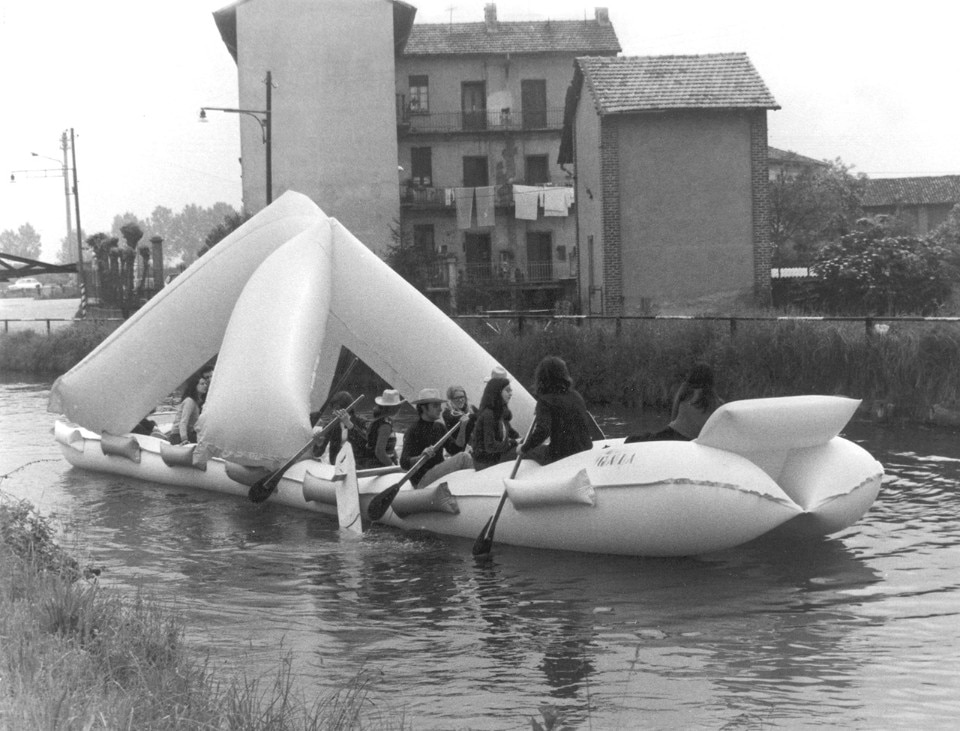 For younger generations approaching Italy’s art scene, the “discovery” of Franco Mazzucchelli (Milan, 1939) is a recent thing. In February 2017, the successful Riappropriazione curated by Michele D’Aurizio for Converso offered Mazzucchelli’s work to a vast audience, which visited the large empty space of the former church in Piazza Sant’Eufemia, entirely wrapped in polyethylene. A space suspended between public and private which the artist explores, as in many previous instances, by a sculptural re-appropriation made especially of air and by the uncontrollable social element unleashed from the encounter between the supple forms of his work and the city space.

If the exhibition at San Paolo Converso offered a casual opportunity to approach the work of Franco Mazzucchelli, three current events offer the possibility of analysing his art up-close: the recently inaugurated exhibition at the Museo del Novecento in Milan (“Non ti abbondonerò mai – azioni 1964-1979”) preceded a few months earlier by the solo show “Pneuma” at the Chert Lüdde gallery in Berlin (until 14 April) and Mazzucchelli’s participation in the group event “Vita, Morte, Miracoli. L’arte della Longevità” at the Museo d’Arte Contemporanea Villa Croce in Genoa.

Read also: In Genoa, Villa Croce reopens with a reflection on the art of longevity

The show in Milan, curated by Iolanda Ratti and Sabino Maria Frassá, allows visitors to retrace the artist’s practice, thanks to a vast selection of documents, photos and three-dimensional works. During his time at the Brera Academy and his encounter with Peppe Colombo and Marino Marini, Mazzucchelli began experimenting on his own the expressive dimension offered by PVC “inflatables”: an anarchic stance against the traditional materials of sculpture. Towards the mid-1960s, the artist started to elaborate a notion of sculpture not as a plastic object tied to the conventional ideas of an interior exhibition space, but as an object that could be enjoyed by anyone in a public outdoor area.

The result of this aesthetic and political choice can be immediately detected in the photos on display in the show: the immaterial quality of the works is manifest by exploring the viewer’s behaviour, in the curiosity or mistrust provoked by the inflatable tubular elements placed in a city setting or in nature. This series of intuitions developed the concept of an art “to abandon” in open spaces, left to its own fate: among the sand dunes in France, in the Middle East, in the waters of Lake Como. Or scattered about slyly so as to be tampered with, removed, stolen, destroyed or simply given up to the tactile experience of the public, as testified by the actions following the abandonment of Grande cocomero and other inflatables in Piazza Meda in 1970, or the reactions of Alfa Romeo labourers on Via Traiano in 1971.

The notion of property is constantly analysed in other actions by Mazzucchelli from the 1970s to today: the above-mentioned “substitutions”, like the recent ones at Converso and Villa Croce, or the famous sit-in at the Chiesa di San Carpoforo in 1976, and the “re-appropriations” offering from the mid-1970s onwards the use of plastic wrap outdoors, describing renewed immersive environments that engulf the viewer and make him participate in a social organism that can re-describe the relationship between individuals and the rediscovery of places.

Alongside the most expanded, experimental and open dimension of Mazzucchelli’s work we find a constant modulation and study of forms. The works displayed at Chert Lüdde (which will also present the artist in the upcoming edition of ArtBasel in the Feature section) manifest the formal results of this analysis, between modelling and modulating matter, between constructing and deconstructing, without abandoning the aesthetic intensity and beauty of the plastic material. The exhibition “Pneuma” is a hymn to this breath that is constantly withheld and expanding across the work of Mazzucchelli, offering viewers the theme of the immeasurable in the contrast between lightness and weight intrinsic to his works, which appear cumbersome and monumental, like the red Coni, 2013, but are instead bodies of air.

Some of the “tiles” presented in the gallery evoke previous experiences in Mazzucchelli’s career, like the installation of the Spazio Anny di Gennaro on Via Solferino in Milan in 1972, which here echoes with similar form in Bieca Decorazione (2017). The long series of sinister decorations are finished objects, conceived as “dark” decorative elements, but are witness to the assiduous exercise of intimate comprehension of the form and poetic possibilities of matter, that of PVC, of which Franco Mazzucchelli is the greatest living interpreter.