The Adriatic city, the ‘other’ side of Italy

A place of mass holidays and suspension of time, now the new Silk Road could restore the eastern coast of the Italian peninsula to its strategic role as a gateway to the East. 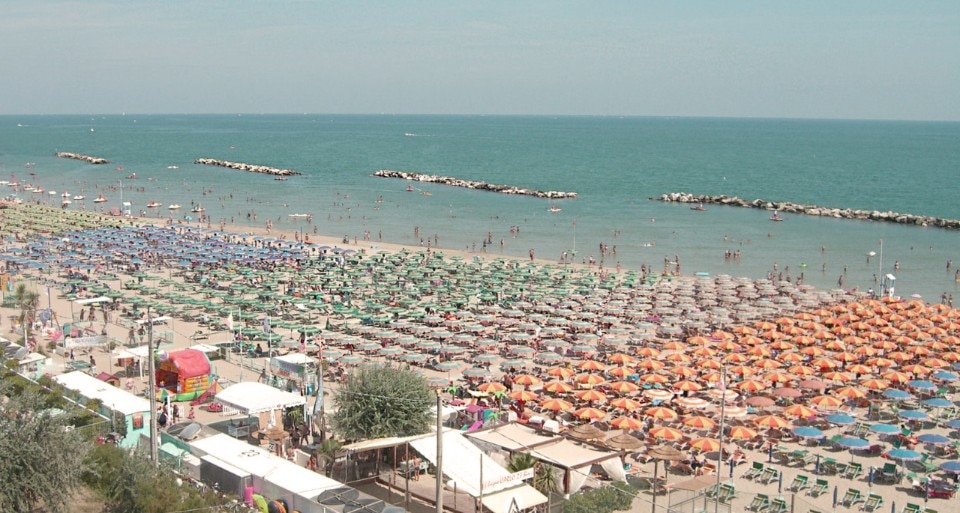 Also known in the past as sinus, inlet or gulf, the Adriatic is the maritime corridor that united Europe and the Levant for over a millennium. The Serenissima Republic of Venice established itself as a commercial superpower by expanding its relations with Asia and the Middle East. Today, the Gulf of Venice and in general the North Adriatic area could play a strategic role again in the new world order thanks to China’s plan to move most of the goods from the polluting large merchant ships that transit the Suez Canal to the new Silk Road to connect over seventy countries by land to the port of Trieste. Rather than a new scenario, it would be a return to being the eastern gateway that the Adriatic had been since the time of Marco Polo.

Photography and literature tell us much about the dual soul of the Adriatic: from the melancholy photographs of the inland rural areas (...) to the ephemeral, dreamy resort architecture...

The new Silk Road, however, also offers an opportunity to reflect on urbanisation along the Middle and Upper Adriatic coastline. Always less populous than the Tyrrhenian Sea, in the second half of the last century it experienced an economic boom thanks to the coexistence of a widespread productive fabric and settlements along the coast which, together with port infrastructures, determined its economic prosperity, confirming its vocation as a tourist and productive area. As far back as the 1930s, decades ahead of studies on the ‘diffused city’ or the ‘Adriatic city’, Corrado Alvaro draw attention on how the Via Emilia had become a linear city that ‘from Bologna to Rimini crosses flat towns that all converge on it as on the central street of a large city’ that leads to the Adriatic Riviera.

On the other hand, this idea of ‘Adriatic city’ is not new. The preliminary report of the second national economic programme for the five-year period 1971-75, called ‘Project 80’ and aimed at classifying the territory into districts, envisaged the development of the ‘Adriatic Corridor’ thanks to the downgrading of the A14 to a state road and the construction of a new parallel sub-Apennine motorway, called the A/14-bis. The plan aimed to urbanize the entire surrounding area, a total of 80,000 square kilometres, creating a metropolis of 30,000,000 inhabitants - an urban vision similar to Los Angeles or the Asian megacities.

During the years of the economic boom, the city started to be conceived and planned starting from the territory. One of the leading figures of this period was undoubtedly Giancarlo De Carlo, already member of Team X and founder in 1974, together with Carlo Bo, of Ilaud, the International Laboratory of Architecture and Urban Design. On the basis of these experiences De Carlo was very active in the Adriatic area: he designed and built the student housing in Urbino, the Enel colony in Riccione and was the protagonist of the Plan for the New Centre of Rimini, a project in which he was involved for ten years, developing a participatory approach to urban planning. In the same years, Carlo Aymonino was involved in the design of the Pesaro school campus, a complex urban project in which the Roman architect pursued a model of city-territory, after years of previous studies carried out in parallel with De Carlo.

Read also: Should we demolish the Postmodern simply because “out of fashion”?

Photography and literature tell us much about the dual soul of the Adriatic: from the melancholy photographs of the inland rural areas dear to Guido Guidi to the ephemeral, dreamy resort architecture photographed by Luigi Ghirri, to the crowded, overexposed beaches of Massimo Vitali. Writer Pier Vittorio Tondelli wrote of a “kitsch Adriatic”. In Rimini (1985) and Un weekend postmoderno (1990), he outlines a radically new imagery also related to an original territorial vision: the Riviera is in fact described ‘as a single large’, linear, ‘city’.

The mid-Adriatic thus became a place for mass holidays where routine was suspended and architecture reflected this hedonistic spirit of escapism by creating new discos such as L’altro mondo di Rimini designed by Pietro Derossi in 1967. At the end of the 1980s, Ugo La Pietra proposed new ideas for designing the area, starting from the Monumenti alla balnearità (Monument to Bathing) in Cattolica, the first examples of works halfway between sculpture and urban furniture. Italo Rota designed the arrangement of Via Dante in Riccione (1999) and a pedestrian underpass in Misano Adriatico. But there are also those who proposed a more nostalgic vision: Paolo Portoghesi designed in Rimini a residential complex and hotel with a Fellini-style atmosphere.

Today, however, urbanisation along the Adriatic ridge remains a possible and mostly unfinished project, a frontier between the old European continent and the opportunities offered by the new Asian powers. In this sense, the development and strengthening of the infrastructure network is of vital importance: ports and logistics hubs, passenger and goods transport by rail, ‘green’ mobility, but also the topic of dismantling or reusing offshore oil platforms. The latter, a particularly fascinating topic which is back in the news thanks to the re-emergence of stories that go back a long way, such as the story of Isola delle Rose. Conceived, financed and built in 1968 by engineer Giorgio Rosa, the island was a utopian project halfway between naval engineering and political experimentation that became a symbol of freedom and escape from traditional society, a space of self-determination that captured the spirit of an era and the libertarian vocation of the Adriatic city.

From 5 to 24 July Adriatica will take place in Riccione, the first summer school promoted by the Architectural Association and sponsored by the Municipality of Riccione to study, discuss and imagine the Adriatic city of tomorrow.