Domus asked Paolo Portoghesi to give readers an overview of Donato Bramante’s oeuvre as a tribute to one of the most outstanding architects of all times, who strove for his buildings to be Italian, European, and universaly Italian but also European and of ‘universal’ value. 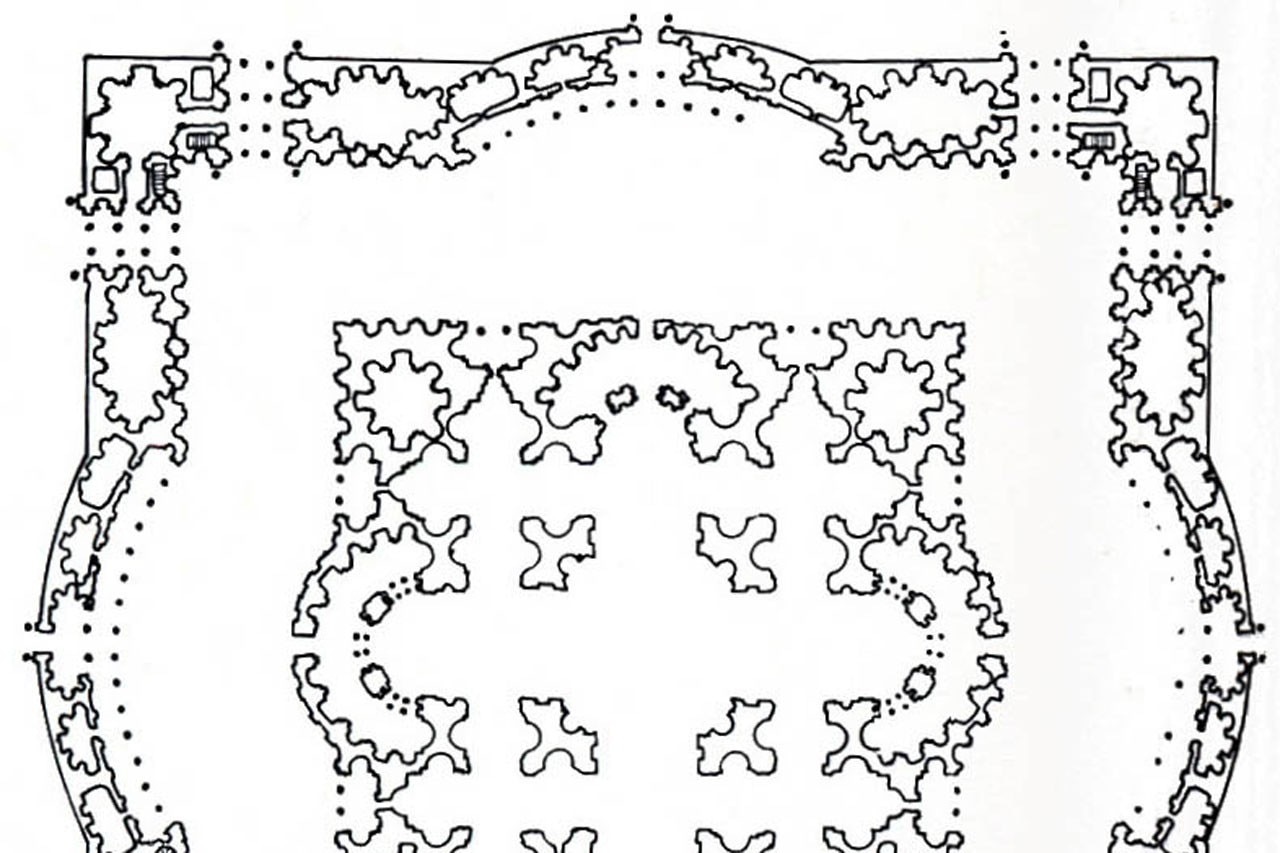 This article was originally published in DomusDomus 983 / September 2014
“I call century not the ordinary measure of time, but those great stages of humanity in which new principles arise and the face of the world is transformed. This occurs through a slow and constant processing of all the social elements, which work on it unconsciously; but before the mortal blow is delivered to the collapsing building, a man is awaited who is destined to embody the whole of that movement to which numerous elements unknowingly conspire, and who is destined to give it a name.”
This vivid description by Francesco De Sanctis of the role played by Machiavelli perhaps befits Donato Bramante the architect even better than Machiavelli the great thinker. For it was he, with his later works, who forced an identity crisis upon regional pluralism, the style that characterised 15th century Italian architecture, to which he himself had made a major contribution. His aim was not to resuscitate Roman architecture, as we used to think, but rather to “exceed” it. To do so he adopted Vitruvius’ rules and the example of classical monuments in a new synthesis forged on the model of the church, and therefore fully sanctioned as possessing unity and universality.

Bramante owes his vocation for clarity, his perspective ability and his love of antiquity to Urbino, the capital of Montefeltro, not far from the village of Monte Asdrualdo where he was born in 1444. His closeness to Piero della Francesca, Laurana and Francesco di Giorgio formed the base for his cultural learning – not easy for a “patient son of poverty”, as he was described by one of his pupils, Cesare Cesariano (Fu patiente filio di paupertate).

Arriving in Milan when he was in his thirties, Donato Bramante boldly combined Brunelleschi’s legacy with Leon Battisti Alberti’s; he associated the reconquest of orders with that of the spatial effect of ancient monuments. This can be seen in his designs for the churches of Santa Maria presso San Satiro and Santa Maria delle Grazie. In his Prevedari engraving, he paradigmatically devised a system of composition in which arches, columns and pilasters were three-dimensionally combined in a mechanism that meticulously and consequentially linked supports and vaults.

The decorative approach in his Milanese work was an essential element, true to 15th-century practice, where each of the regional centres of development of the new visual language envisaged a different plastic enrichment of the archetypes derived from antiquity. It was only after moving to Rome, just before the turn of the century, that the architect consciously gave up decoration in order to steer his work towards the pure enunciation of compositional elements.
In the courtyard of the Santa Maria della Pace he admirably interprets, with absolute purity of constructive form, the quiet intimacy of the cloister as a symbol of monastic life. These were Bramante’s early years in the Rome of Alessandro VI Borgia, and the architect was interested most of all in the study and plotting of the city’s ancient monuments. In 1503 the election of Julius II brought about a profound change in the architect’s life. The programme with which he had arrived in Rome, that of immersing himself in the philological study of antiquity, was upset by the new Pope’s request that Bramante help him in a series of ambitious exploits for which an entire lifetime would not have sufficed. The encounter between the bellicose Pope, then 70, and the architect, who was about to turn 60, developed into a deep friendship, based on the complementariness of their characters and their shared enthusiasm for a pragmatic, optimistic ideal. The anecdote about the architect reading and commenting on Dante at the sick Pope’s bedside reveals a solidarity that went beyond architectural commitments.

The first act of collaboration between Julius II and Bramante was the Belvedere courtyard, the monumental conjunction of two separate building complexes, at that time divided by a rural landscape: the Vatican palace, built around the narrow Cortile del Pappagallo, and the Belvedere erected by Innocent on the ridge of a hill overlooking the grasslands of the Castle. The very fact that the two detached units, set against a natural background, were seen as connectable in a single body, is in itself enough to state a new way of thinking in dimensional terms. Here at the Belvedere was the first time that the urbanistic scale of the ancient city was recaptured, and as a consequence came the practice of artificially reshaping the landscape.

When one enters the presbytery of the Santa Maria del Popolo, one is reminded of the Brera altar-piece by Piero della Francesca, in which numerous similar elements feature: the caissons and shell-shaped bowl-vault, and the apse with its barrel-vaulted ceiling as a prelude to it; but to Piero’s prototype the architect added not only the power of its articulated structure, but the value of a light intrinsic to the object, no longer the light of universal wisdom but a particular generator of “effect”.

In Bramante’s tempietto San Pietro in Montorio, the tiniest of key monuments in the history of architecture, centrality is the dominant idea that immediately captures the observer’s attention and compels him to mentally survey the reasons, rules and properties of this structural law.

The idea of completely rebuilding the basilica of Saint Peter’s occurred to Julius II at a tragic time of frustration and waiting. The idea seems to stem from his meditation on death; at the beginning the Pope was thinking solely of his own tomb and imagined it similar to that of his uncle Sixtus IV: isolated like an ark, but very tall like an ancient mausoleum. Since no chapel in the old basilica could contain it, a structure had to be contemplated on the same scale as that of the monument. It is probably the grandiosity of the new programme that reveals the inadequacy of the conception with which the restoration of Saint Peter’s had been begun by Rossellino.

Although Vasari’s theory that the new church was to have risen around the tomb is unreliable, it is nonetheless true that the mausoleum and the church are organically linked in Julius’s vision. Bramante designed the new structure along the lines of Leon Battisti Alberti’s work, giving it concatenated parts and a high degree of complexity. The point of departure is a large space covered by a cupola, but this dominant element does not become isolated from the context. Instead, it becomes the nucleus of a development around which germinates a whole series of homogeneous spatial events.

The most fascinating aspect of Bramante’s ground plan is the limpidity of its aggregative laws and the simplicity of its result. Here he achieved impressive unity in multiplicity by means of a ratio of homogeneity between the part and the whole, reminiscent of a page from Plotinus on the relation between mundane reality and idea: “Down here… every part always springs from another and every single piece is simply a part; up there, by contrast, from the whole incessantly springs the single piece and is at the same time both single and whole. True, it appears as a part, but to an acute eye it is revealed as a whole.” (Enneads V, 4, 28). Bramante achieves his result, spatial unity, by using with extraordinary synthetic capacity a series of experiences from remote space and time.

The Roman baths suggest its scale and order, but their structure as a sequence of self-sufficient spaces is rejected in favour of a late-classical spatial blend. Absorbed from medieval tradition is the “propositional” process used in the connecting of surfaces, derived from scholastic logic and the verticalism of the central space.

Bramante went down in history as the founder of a new visual language that gradually spread throughout all Europe. His fame as a radical and impatient innovator struck popular imagination, and Andrea Guarna condensed it in his fanciful anecdote Simia.

Having arrived in heaven in the presence of Saint Peter, the architect declares: “First of all, I want to get rid of this access road which is so uneven and difficult to ascend on one’s way from the earth to heaven. I’ll build a smoother and wider one that the souls of the weak and the old will be able to manage on horseback. Furthermore, I am thinking of knocking down this heaven and putting up another, with more beautiful and cheerful homes for the blessed. If these plans meet with your approval I am with you; otherwise I’ll be off to Pluto’s place.”