Luigi Ghirri: The Landscape of Architecture

Three hundred photographs by Luigi Ghirri on display at the Triennale di Milano show a steady focus on the landscape, especially its edges. 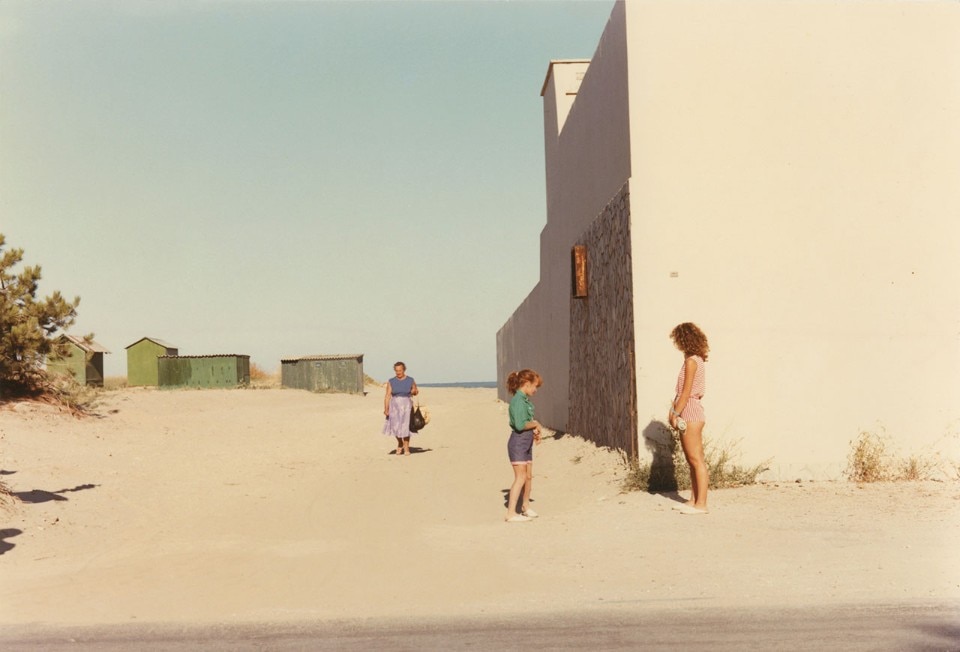 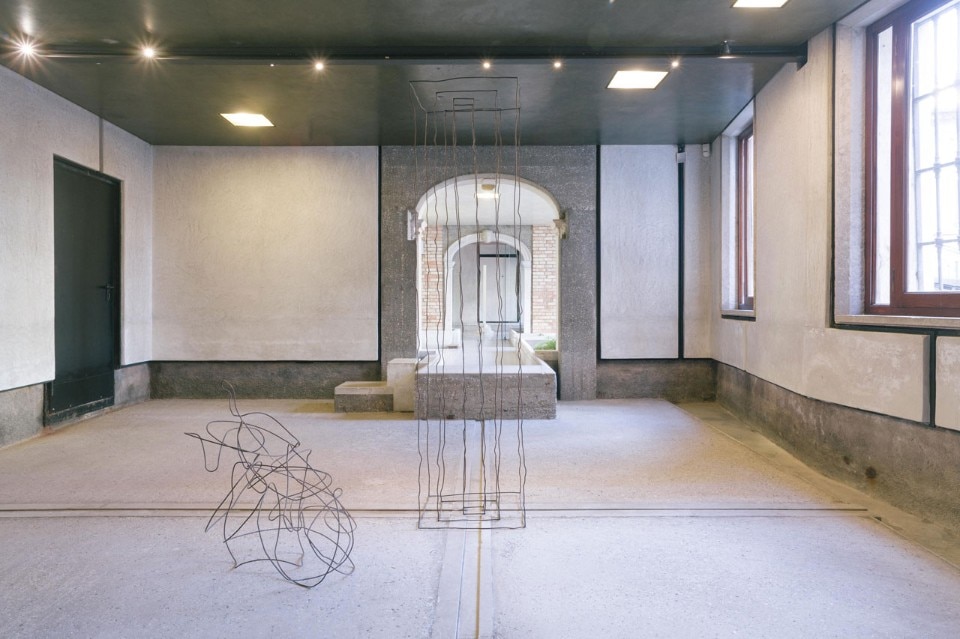 There is a photograph by Luigi Ghirri with a hint of disrespect. A blue car passes in a blur. Framed by the rear side window, plopped down in a flat landscape, we barely make out the giant red cube designed by Aldo Rossi at the San Cataldo cemetery just outside Modena. The unfinished building (1971) is one of Rossi's most distinctive works. The car speeds, the cemetery appears and immediately disappears. Ghirri (1943-1992), whom we imagine is also in a car, looks into the lens of his camera and closes the shutter. For one instant, all is aligned. Either before or afterward, Ghirri went all around the ossuary, during the morning, during the afternoon, portraying the mute block, its noiseless rising from the broad plains. He entered it, and with his head practically inside the empty tombs, he photographed the outdoor surroundings, square handkerchiefs of sky and grass the same size as the burial recesses.

Precisely when Vittorio Savi asked Ghirri for a photo report on the “house of the dead” by Aldo Rossi, a ten-year collaboration started between the photographer and Lotus International, a magazine about urban planning, architecture and industrial design founded in 1963 by Bruno Alfieri, a motoring enthusiast who named his nascent periodical after an automobile: the Lotus 25. This collaboration is the cornerstone of the exhibition “The Landscape of Architecture” hosted at the Triennale di Milano until 26 August 2018. During the inaugural press conference, Stefano Boeri, the president of the Triennale, remarked how “what is being called into question here is the primacy of architecture over the landscape.” The suggestion brought to mind all the small, continuous falls that Ghirri’s buildings make (churches, castles, cemeteries and palazzi) from their non-existent pedestals.

Repeatedly and constantly, Ghirri finds interest in the landscape, especially its edges, soliciting his subject’s relation to the present: mutability, neglect, fantasy, mystery. “When I was a child, the photographs that pleased me most were the ones of landscapes inserted in atlases of geographic maps,” Ghirri writes in an issue of Lotus. “Inevitably, there would be a little man standing stock-still with the Niagara Falls looming behind him, or poised on the edge of a cliff. I would find the same little man on postcards that depicted piazzas of lesser or greater fame. Sometimes he was climbing up historical monuments or lost among the ruins of the Roman Forum or posing under the leaning Tower of Pisa. I liked the idea that the photographer was never alone, that he had a friend who crossed the world with him to discover and represent it. Later, when I began taking pictures myself, I continued looking at photographed landscapes, but I never found the little man again. The places had dissolved, the little fellow had gone away, taking with him the representation of places, leaving only their simulacrum behind.”

Seated next to Boeri was Pierluigi Nicolin, the long-standing editor-in-chief of Lotus. He reminisced about the years when the printing of colour photographs was still a headache. “In fact, we published Ghirri’s photo of the automobile and the cemetery in black and white, fearing we were demolishing Aldo Rossi's work. But when I sent it to him, he loved it.” The 300 Ghirri photographs on display at this exhibition come from the archives of Lotus and the Triennale. Some are original prints; others are slides projected on the wall – as Nicolin explained, photographers used to deliver their work in the form of slides back in the day. They are juxtaposed with noteworthy issues of Lotus. The curator Michele Nastasi, a collaborator at Lotus and himself a photographer, explained how the exhibits are divided into seven sections. The first shows the photographs and original material for Ghirri's bilingual book Paesaggio italiano/Italian landscape (1989). It is one of the most distinguished instalments of the Quaderni di Lotus series, and made to accompany a Ghirri exhibition by the same name held in Reggio Emilia. Another section shows the pictures Ghirri took of the famous exhibition hosted at the 17th Triennale di Milano in 1986, "Il progetto domestico", whose 27 displays included installations by Ettore Sottsass, the artist George Segal, Mario Merz and Rem Koolhaas. Today’s exhibit features a projection of pictures from the Atlante metropolitano made by Koolhaas for another themed Quaderni di Lotus publication on the metropolis. The photos are by Ghirri and others, and include several rare landscapes he took on a trip to the United States in 1986.

The display at the Triennale was designed by Calzoni Architetti from Milan. It is rather nocturnal, thanks to the projections that need darkness and thanks to the coloured neon signs similar to the ones at snack bars that point out the route from above. In addition, the first photograph we encounter is taken at night: Polignano a mare, 1986. It shows three women seen from the back sitting on big rocks, looking toward a very black sea and sky. The display-designers’ idea was for us to take in all the photographs with one sweeping glance. They stand upright next to one another on tall pedestals, their captions hand-written in pencil. At the entrance, we are offered the chance to go up a few steps to enjoy a panoramic view, like wayfarers taking in a fog-covered coast. At the end of the route stands a cage built in imitation of the cell-like display designed by Achille Castiglioni for “Il progetto domestico” called Sei persone per 72 mc. Photographs belonging to the current Ghirri exhibition cling to it. Travelling the route backward, we feel like salmon returning upstream, because all the pictures now show their mute backs. But if you look closely, you understand that the spectacle continues here, too, namely in the notes that Ghirri used to write on the other side of his photographs. Our eyes scan all around and linger on the margins. There is the well-known image of the Tower of Pisa with the sailor (1979), the miniature reproduction of Piazza dei Miracoli, and Piazza San Prospero in Reggio Emilia. Most of the landscapes are deserted. The architecture collapses at the moment of climax. Every once in a while, the friendly little man appears, immobile, always seen from behind, “on the edge of a cliff”.