Tadao Ando: “The world must change”

Tadao Ando talks about how boxing influenced his approach to life and architecture. As for rising to global challenges, he suggests that everyone gather their inner strength, saying, “Apples and people should remain green, unripe and full of spirit to challenge absolutely anything.” 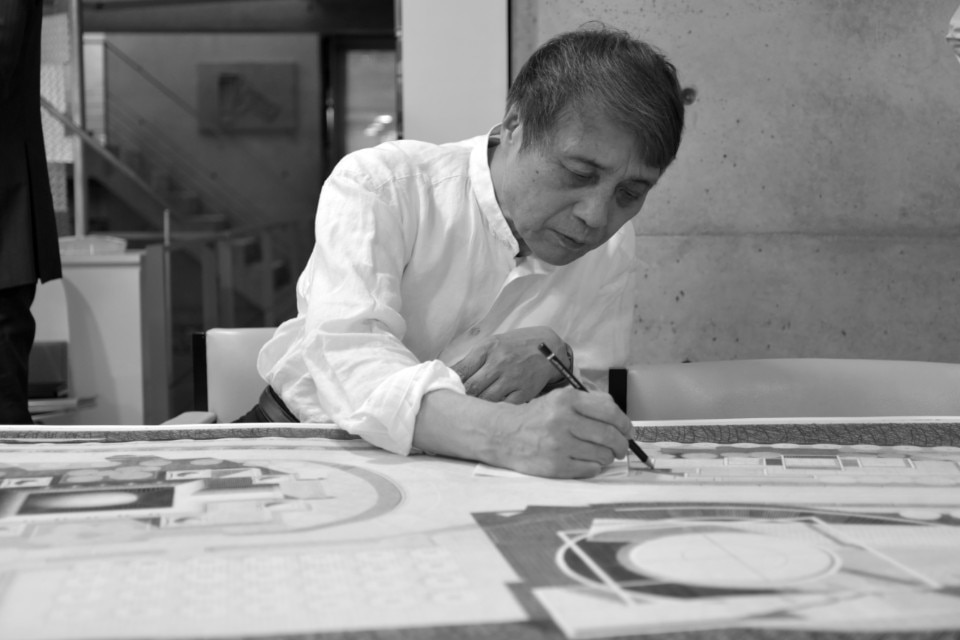 Much has been written about the work – by now legendary – of Tadao Ando (or Ando Tadao, formally), but not always to the point. Indeed, Ando is more than an architect of immense success and great charisma, more than a quintessential starchitect; he is an all-round intellectual who has succeeded throughout his 50-plus-year career in impressing thought of prime greatness on the cultural scene of the late 20th century. His vision has encountered – and used – architecture and sometimes design to propose to our era an approach to life and the cosmos that contemporaneity had forgotten.

Read also: Tadao Ando will be the Domus guest editor in 2021

In order to position Ando in the context rightfully appertaining to him, it is too little to dissect his buildings in detail; it is necessary to plumb their essence. The influence of modernism (and Le Corbusier in particular) are only the apparent infrastructure. Under it flows and pulsates traditional thought, especially Zen, which represents Ando’s true source of energy. His quest is not simply to create residential solutions and to manage space by employing technology suited to the new construction requirements. Rather it is a mental state, a spiritual dimension that has no real time or real place, but depends largely on our intuition. Ando’s buildings bring us in touch with our real self, with the present, the eternal here and now that is the actual reality. His tools are a preponderant use of concrete, axes, points of light and conceptual circles that open and close his designs. Having the possibility to visit or maybe even live in a piece of Ando architecture means having the opportunity to acquire awareness of our inner relation to the world. It is an occasion to perceive the infinite continuity that persists and courses under finite appearances. In other words, it is to experience the present moment and be grateful for the very gift of life. Another of his tools is compassion – more about that another time.

Mr. Ando, both your curriculum and your career are out of the ordinary. When did your love of architecture begin?
I wanted to experience making something from nothing after seeing
the passion of construction workers in my hometown. I grew up in downtown Osaka, in a neighbourhood full of wooden row houses. Small factories lined the streets, and I used their workshops as my playgrounds. During this period, I gained a sensitivity towards creating objects, using my hands as instruments. When I was 14 years old, my one-story house was converted into a two-story structure. Only one young carpenter undertook this building project. I watched him work quietly and unwaveringly from morning to night for several months. I longed to join in on the construction. As the roof was dismantled, a hole appeared in the sky above my head. I still remember the glare of the sky and the excitement I felt as I looked up. After that seminal experience, I took many detours in my professional life, such as becoming a prizefighter on the boxing circuit and applying myself to graphic design and product design. In the end, the memories from my youth and the emotional excitement of building led me down the path of architecture.

Did Domus have a role in your cultural and professional formation?
In the late 1960s, I aspired to make a living through creating. Information from the design powerhouse of Italy flowed into Japan as a great source of inspiration to me. Much of my pay check at the time was reserved for expensive and imported design books. I would flip through their pages until they were falling apart. One of the shining symbols of my youth was Domus. The 1969 introductory issue of Ettore Sottsass’s bright red, portable Valentine typewriter was my bible as a young architect. Incidentally, Domus was my first international contact with a design magazine. I requested that one of my first projects, a cafe interior in Osaka completed in 1971 known as the Café OS 2001, be published. I sent the editorial team some photos and drawings as a challenge to myself, and I was surprised to see they were published in the following month’s issue. I’m grateful to Domus for giving me the courage and the hope to work all over the world, just as I had begun my early architectural endeavours. I hope that Domus will continue to shine as a beacon of hope and innovation for all designers ready to rise to the challenge.

Boxing is a sport of pure stoicism and solitude; in the process of pushing your body and mind to the absolute limit, power is generated. Architecture is the same

You became well known and highly respected early in your career. Did this element affect your evolution?
Because I was self-taught and had no financial support, especially in my office’s early days, I was always desperately focused on my current work and lacked the luxury to reflect and analyse what was happening around me. However, I do not remember deciding which path to take based on what people thought of me. I have never thought of myself
as an expert of any kind. But I had many chances early on in my career to be critiqued in a multitude of different cultures such as Italy and France. My first exposure to the world stage was in 1982. I was invited by the Institut Français d’Architecture to have a solo exhibition in Paris. At that time, I had only built private residences and small commercial facilities, so I had no idea what to expect at the inauguration of the exhibition. At the press conference, I was bombarded with difficult yet essential questions, typical of the logical and rational mindset of the French. They asked me, “Why concrete?” Some critics attempted to associate the stoic nature of my architecture with the reclamation of wabi-sabi and fundamental Japanese values. But because I was so far removed from their world, I accepted their criticism with an open mind, and for the first time, I experienced my buildings from the outside in.

You have been an athlete. How important is sport and discipline in your life and profession?
The tense moments waiting for the bell to ring in a boxing match are uplifting, yet nerve-racking. New building projects require the same mentality. In boxing, you must risk moving into danger in order to fully take advantage of your skills and eventually win the match. Creating something in architecture – not just building something, but creating something – also requires the courage to take risks. Taking that extra step forward into the unknown is vital. When you are a boxer, you prepare for years for rounds that will only last minutes. It’s a fight, basic and primitive. Architecture, on the other hand, is a very long match, much longer than three minutes, but the tension must be maintained just as in boxing. Sometimes architects acquire a taste for fame
and lose their discipline because they have forgotten the hunger of their early careers, when you are the only one you can rely on. Boxing is a sport of pure stoicism and solitude; in the process of pushing your body and mind to the absolute limit, power is generated. Architecture is the same. Each project has a strict programme and budget and there might be little freedom to design. You must think through what is truly necessary and what needs to be built.

What is a typical day like? Do you have a schedule?
I try to live a humble life. I wake up early in the morning, work, and go to bed at night. In terms of exercise, I walk at least 10,000 steps a day and go to the gym after work. I started doing this after I had two major surgeries in 2009 and 2014. Up until then, I had been working every day of my career at the same relentless pace since my twenties. After returning from my successful surgeries, I cut my working time in half. This gave me time to read, catch up on culture, and do things that were not previously possible because of my exceedingly busy schedule. I guess I’ve lost some things because of my illnesses, but I’ve also gained things as well. I am missing five of my organs, so I feel much lighter and nimbler than I used to!

What is the role of traditional Japanese culture in your life? And in your work?
The essence of Japanese traditional culture lies in its view of nature. This is in stark contrast to the Western idea of nature, which attempts to control it as part of the artificial world. Nature changes with the transition of the seasons and the passage of time, and therefore the things we create in nature must become part of it. Nature is not an object to be antagonised and conquered, but an entity in itself. This set of values, nurtured by the temperate climate and geographical conditions of an island country, is part of all Japanese people’s heritage. I do not deliberately express Japaneseness in my architecture, but
if others feel this way when they see it, maybe it is an unconscious expression of this inherited view of nature.

Changing the framework of cities for a sustainable future cannot be achieved solely through the power of politicians, developers and architects. We need to borrow the strength of every living person on Earth

Global warming and the Sustainable Development Goals for 2030 seem to make sustainability a necessary requirement for all architectural thinking.
My first awareness of the problems of global warming was in 1972 when
I read the translated report of The Limits to Growth by the Club of Rome. They predicted a quickly-approaching “asymptote” for the human-made world. In addition to severe environmental degradation and energy issues, climate change has been a massive issue in recent years.

What can architecture do?
Environmental problems including those within the confines of the metropolis are ultimately caused by the imbalance between the artificial and the natural resources in the modern world. If we look at the solution to this problem within the realm of the built environment, we can arrive at two extremes: a “cave-dweller” world where we use significantly less energy or a high-tech world where technology allows us to live compactly and artificially by consuming renewable energy. Whichever direction we head in, our urban activities as a society will have to be restricted. The world must change. What is most important is for that change to share an awareness of issues and shifting values.
Changing the framework of cities for a sustainable future cannot be achieved solely through the power of politicians, developers and architects. We need to borrow the strength of every living person on Earth. I plant trees together with people to draw out that power, to get the conversation started. What is most important is not the act of planting the tree, but the care and nurturing of the tree after it has been planted. Nature is not our right but a privilege. For the environment to grow, humanity must grow as well.

What is your plan for Domus 2021?
Through architecture and design, I would like to provide an opportunity to think about the core essence of human culture, about the elements that should stay constant as the world around us evolves.

What advice do you have for architecture students?
Passionately live your own way and cultivate your inner power so you can live with strength until the end of your life. Apples and people should remain green, unripe and full of spirit to challenge absolutely anything.