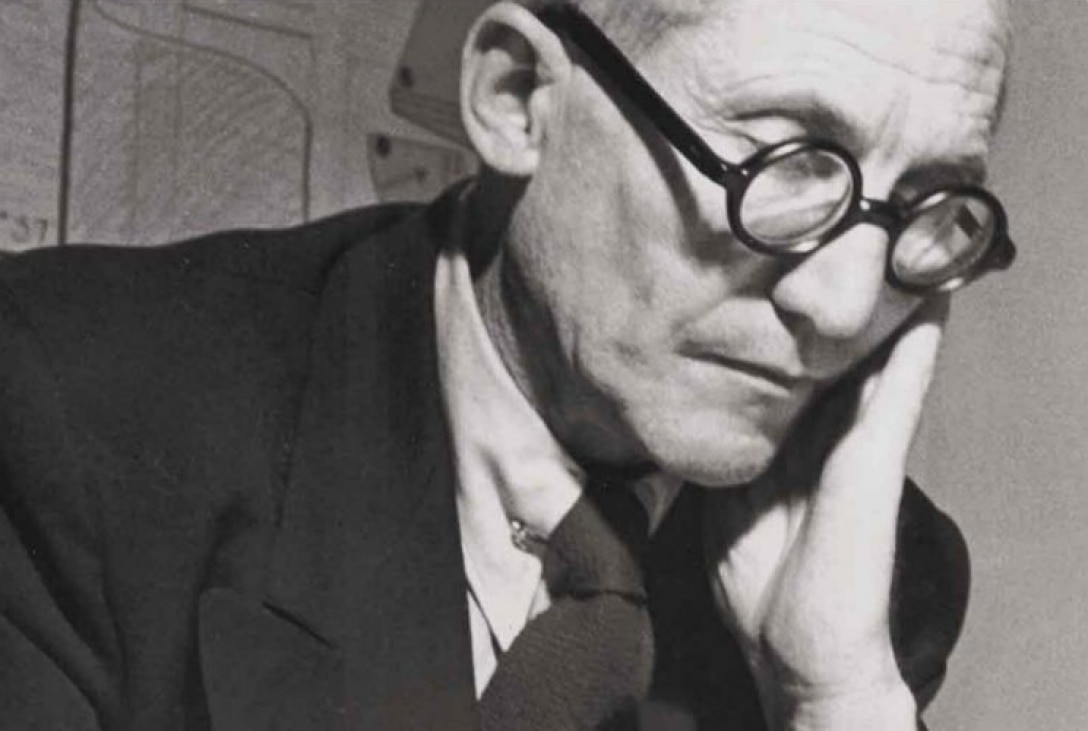 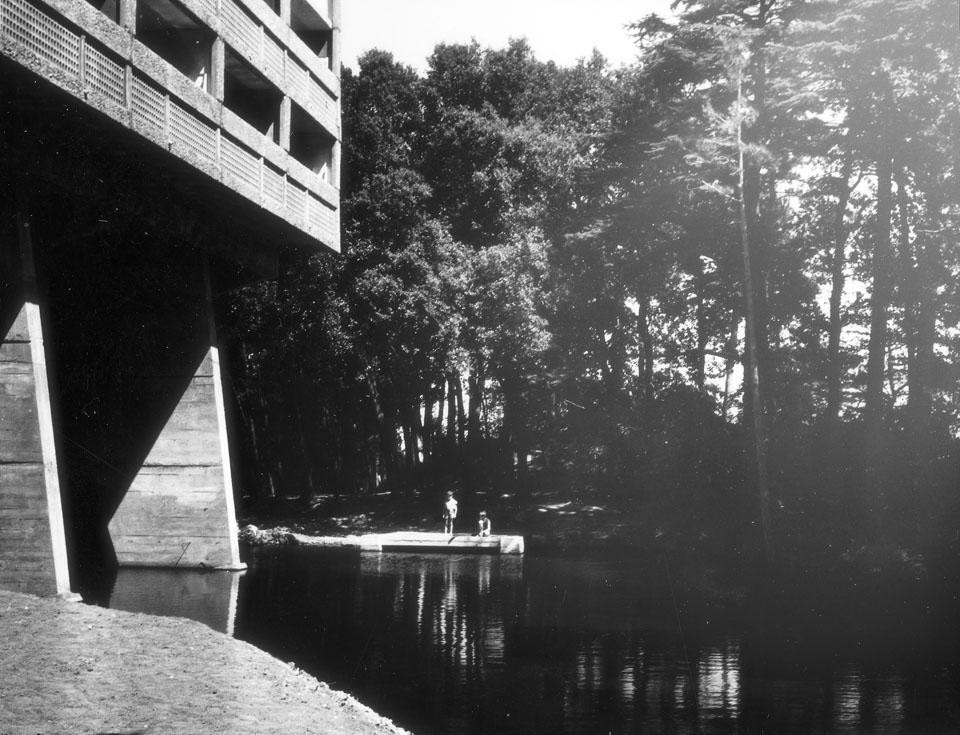 Charles-Edouard Jeanneret (1887-1965), who chose to present himself to the world with the pseudonym Le Corbusier, is undoubtedly one of the most important figures in the complex panorama of 20th century architecture. A highly-skilled creator of his own legend, he had (and continues to have) an extraordinary influence on the generations that came after him.

Considered to be the master of the Modernist Movement, he was the source of inspiration – among others – for the very young members of Gruppo 7, the heart of the International Congresses on Modern Architecture (CIAM), a yardstick for contemporaneity and featured in magazines of all kinds, from “Domus” to “Casabella”, from “The Architectural Review” to “L’Architecture d'Aujourd'hui”. Born and raised in the village of La Chaux-de-Fonds and having grown up in the shadow of Charles L’Eplattenier, Le Corbusier made his architectural debut in 1905, building a villa for Louis Fallet at the tender age of seventeen (in collaboration with the architect René Chapallaz).

However, as was the tradition of the time, immediately after having completed his studies (carried out at the local School of Decorative Arts), he began a long tour around Europe which was to have a great influence on him. Between 1907 and 1909, Le Corbusier visited (and often redesigned) works seen in Italy (in particular the Certosa di Ema, which in the 1950s became the model for the construction of the convent of La Tourette), Hungary and Austria (in Vienna he was often to be found at the studios of Josef Hoffmann, Koloman Moser and Gustav Klimt). He ended his tour in France, - meeting Tony Garbier in Lyon - and Paris became his temporary home thanks to a job he found as a draughtsman for the Perret Brothers. Returning briefly to La Chaux-de-Fonds, he was hired to prepare a study on German decorative arts (Étude sur le mouvement d’art décoratif en Allemagne, 1912), a period which saw the emergence of his desire to move to Germany. Here, he met Walter Gropius, Mies Van der Rohe, Heinrich Tessenow and Peter Berehens, who hired him for a short period. He then set off once more, this time towards the East, reaching Istanbul and crossing Greece on his return. Athens marked another fundamental stage in the evolution of his architecture (the drawings he dedicated to the Acropolis are famous), but throughout the long tour, Le Corbusier sent a series of articles to the Swiss magazine “Feuille d’avis” which explained the meaning that each of the works visited had for the young designer. Le Corbusier left Switzerland definitively in 1917 to return to Paris, where he opened his first professional studio

In the French capital he dedicated himself on the one hand to developing his interest for the application of the modern technique of reinforced cement - with which he had already experimented in 1914 with the first designs for Maison Dom-Ino - thanks to a collaboration with SABA (Société d’application du béton armé). At the same time, he met and frequented a large group of artists, including the painter Amédée Ozenfant who, together with the writer Paul Dermée, worked alongside him in directing the magazine “L’Esprit Noveau” (1920-1925), which became the official organ of the purist movement founded by Le Corbusier and Ozenfant, with the aim of overcoming the limits demonstrated by Cubism in expressing the image of modern society characterised by machines.

A number of seminal projects which never went beyond the initial stages date back to this period, including the City for three million inhabitants which was presented at the Salone d’Automne in 1922, the designs for the Immeubles-villas, the studies for the Maison Citrohan, seen as a prototype for a habitat to be reproduced in series (exactly like the cars that inspired the project’s name) thanks to the use of a reinforced concrete framework. At the same time, there were the first works constructed in France (the studio for Ozenfant, 1922; the La Roche-Jeanneret semi-detached home, 1923-1924; the pavilion for Esprit Nouveau, 1925; Villa Stein-de-Monzie in Garches, 1927) and the creation of one of the most important books dedicated to design: Vers une Architecture (1922), a studied collection of a large proportion of the articles published in “L’Esprit Noveau”, later republished in “L’Urbanisme” (1924), “Almanach d’architecture moderne” and “L’Art décoratif d’aujourd’hui” (1925). Due to his intense activity as a theoretician, Le Corbusier had already become internationally famous, and numerous invitations to conferences and exhibitions further strengthened his standing, together with the global critical success met with the building of Villa Savoy in Poissy (1929). An expression of his ideas up to that point, the house is the full-scale demonstration of the advantages of reinforced cement, which rendered possible the application of the five principles - known as “the five points of architecture” - which were central to the implementation of the architectural revolution led by machines.

It was in fact machines that rendered standardised production and heavy prefabrication possible, aspects that were necessary for the construction of structures in reinforced concrete made up of beams and pillars (the “pilotis”, the first of the five points). These in turn allow for the internal walls to be separated from the load-bearing structure and positioned as desired (the principle of “plan libre”) and for the façades to be organised as simple sequences of solid and open surfaces (“façade libre); to substitute the traditional vertical form of window with ribbon windows (“fenêtre en longueur”), which maximise the effect of natural light. Lastly, it is reinforced cement that allows for the construction of flat roofs destined to be used as terraces or gardens (“toit terrasse”), which become an integral part of the domestic space.

From this moment until 1940, the year in which Le Corbusier was forced to close his Paris studio with the outbreak of the second world war, the career of the Swiss architect was decorated with awards, recognitions and prestigious contracts which came in from all over the world. The war however led to a marked interruption in the creativity of Corbu. The day following Armistice, the designer felt great disappointment for the terrible consequences of the use of machinery for the war industry, and ever increasingly attracted by the expressive potential of, for example, the creation of cement from scarce resources, almost manually.

The five points were re-elaborated and even partially repudiated, and Le Corbusier worked ever increasingly with the so-called béton brut (one of the elements that was then adopted by the members of the Brutalist current which emerged in England at the end of the 1950s), with curved forms and silhouettes and with colours and materials that can be seen in a number of the masterpieces constructed from 1945 onwards: l’Unité d’Habitation in Marseilles (1945), the chapel of Notre Dame du Haut in Ronchamp (1950- 1955), the convent of Sainte-Marie de la Tourette in Eveux-sur-l'Arbresle (1953), right up to the construction of Chandigarh, the new capital of the Indian state of Punjab, which occupied Le Corbusier until his death in 1965.

A man like Le Corbusier can never die. [...] Le Corbusier is not dead, and this is no transcendental lucubration: the man is still among us, as his works, his thoughts and even his aphorisms are still a part of the process, expressed as they are with an unrivalled capacity for synthesis worthy of a genius