From the aftermath of World War II until the early 80s, a global trend of criticism against Modern Movement developed, based on the principles of a tectonic architecture, where materials were laid bare in their potential of expression. 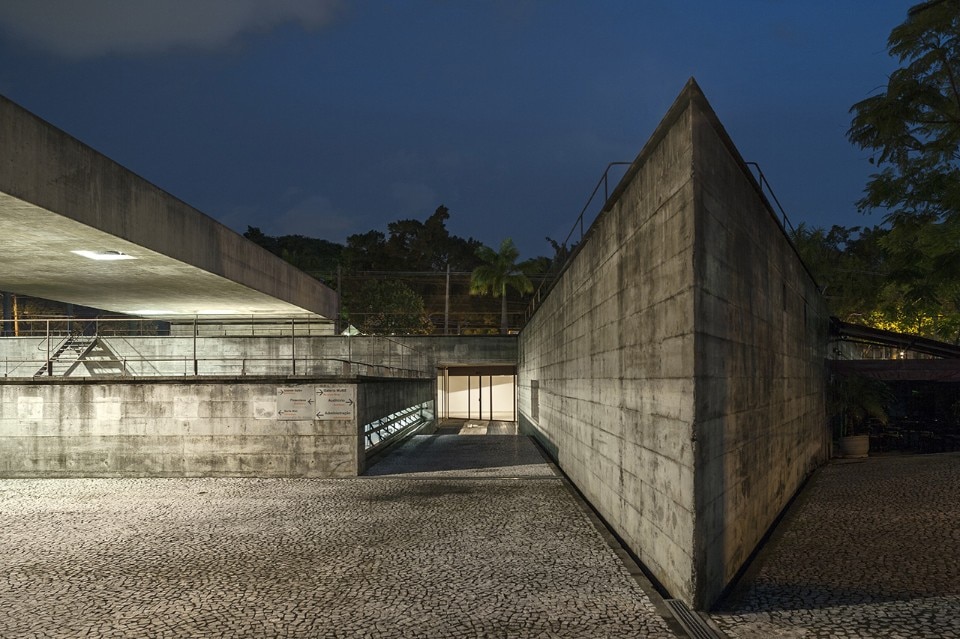 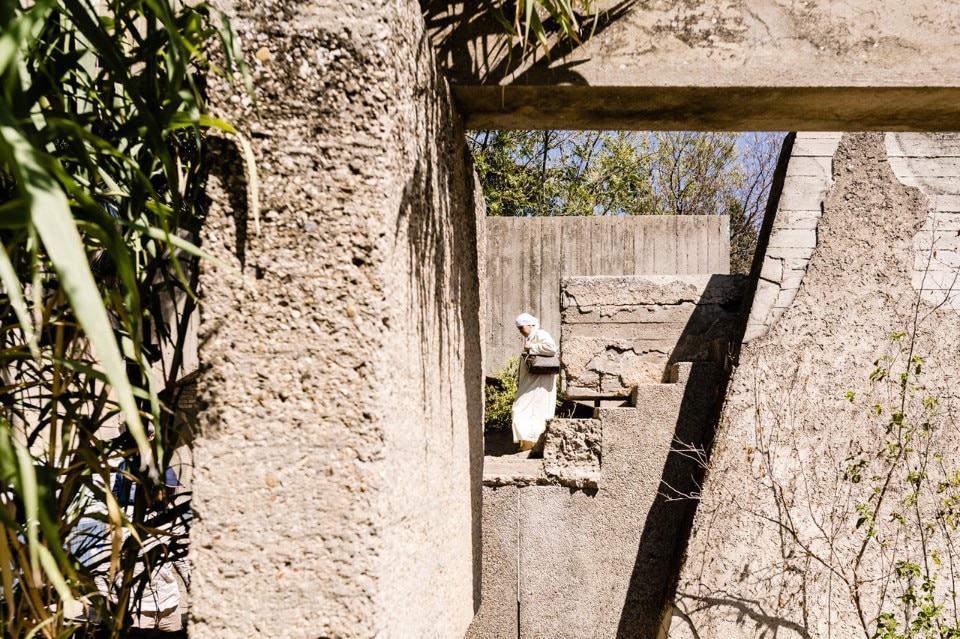 Brutalism is an architectural tendency which developed in postwar years within the criticism against the principles and stylistic language of Modern Movement. The first epicenter for the formulation of brutalist principles was the United Kingdom, where some architects sought a critique of Modern that should be neither historicist nor closed to the “popular” language of Scandinavian Empiricism. Buildings had to be laid bare in the objectivity of their materials; concrete, glass, brick, steel, had to be assembled with no formal mediation, the technical systems had to bel left in plain sight: “…brutalism attempts to drag a rough poetry out of the confused and powerful forces which are at work in a mass production society. (…) its essence is ethical.” (Smithson, 1956). The first wave in brutalist research would in fact share both historical period and ideas with the informal paintings by Jackson Pollock, and the anti-artistic feelings of Jean Dubuffet’s art brut, but most of all with those  reflections on postwar society between urbanization, mass production and consumption, automatization, which paved the way to Pop Art through works such as Just what is it that makes today's homes so different, so appealing? (1956) by Richard Hamilton or the exhibition This is tomorrow at the Whitechapel Gallery in London (1956).

Girl on a Street in the Sky, Robin Hood Gardens, 1972. Photograph © Sandra Lousada

Deck of Robin Hood Gardens with Alison Smithson, photographed by Peter Smithson,
about 1970. Courtesy of the Smithson Family Collection

Faculty of Humanities and Social Sciences of the Ben Gurion University of the Negev, Rafi Reifer, Amnon Niv and Natan Magen, 1968-1971

Girl on a Street in the Sky, Robin Hood Gardens, 1972. Photograph © Sandra Lousada

Deck of Robin Hood Gardens with Alison Smithson, photographed by Peter Smithson,
about 1970. Courtesy of the Smithson Family Collection

Faculty of Humanities and Social Sciences of the Ben Gurion University of the Negev, Rafi Reifer, Amnon Niv and Natan Magen, 1968-1971

Fully involved in such cultural phenomenon, Alison and Peter Smithson were in fact the most relevant figures in British brutalism, and their secondary school in Hunstanton (1949-56), in the objective nudity of its structure and machineries, would stand out as the starting point of a long season where many of their projects would then line up: the extension for the University of Sheffield (1953, unbuilt) the Golden Lane Estate (London,1952), the Economist Building (1959-63), but most of  all the Robin Hood Gardens residential complex (London,1969-72). The UK scene would  also include realizations such as the South Bank Arts Center in London (1951-), mainly designed by Warren Chalk, Ron Herron and Dennis Crompton, the Faculty of Engineering of Leicester University (1959-63), the Faculty of History at Cambridge University (1964-67), the Queen’s College dormitories in Oxford (1966-71) by James Stirling — who would nonetheless always declare not to be part of the brutalist group — and would then be completed by works from the 70s such as the Alexandra Road Estate by Neave Brown (1968-78) and the iconic Barbican Estate by Chamberlin, Powell and Bon (1965-76).

Since the early attempts to draft its formal definition, the notion of brutalism encompassed a wide and very diverse spectrum of references and elements of architectural language, as the fundamental essay by Reyner Banham The New Brutalism (1966) confirmed, by outlining an architectural landscape that sprung from expressions such as Le Corbusier’s Unité d’Habitation in Marseilles (1948) and included his postwar works such as the Couvent de La Tourette in Éveux (1953-60), the Roq et Rob urbanization project in Roquebrune (1949, unbuilt), the Maisons Jaoul in Neuilly-sur-Seine (1956), where the plain honesty of exposed concrete was prevailing, but some sculptural contributions where already there — before fully expressing in the buildings in Chandigarh (1951-)  — to pave the way to a wider definition of the brutalist trend through the years

As architectural history progressed, and the notion expanded up to a global scale, the word brutalism was more and more connected to a mainly aesthetic value, characterized by a massive use of exposed concrete (béton brut) in its potential of impressiveness, of defining tectonic volumes tending to sculptural monumentality. Despite their belonging to specific design ethics, as a result of specific evolutionary trajectories, many European works have been associated to brutalist aesthetics, such as the late work of Marcel Breuer, (from the IBM Research Center in La Gaude, France, 1961-62, to its overseas translations including the  Whitney Museum in New York, 1966), the work by Claude Parent in France, by Gottfried Böhm in Germany, the Italian works by Vittoriano Viganò (the Marchiondi institute in Milan, 1958; the Faculty of Architecture of Politecnico di Milano,1970-85), Enrico Castiglioni (the House of Culture in Busto Arsizio, 1955; the Facchinetti high school in Castellanza, 1965) and part of the work by Giancarlo De Carlo (the Matteotti district in Terni, 1969-75).

At a global scale, associations to brutalism were even wider, including: the Japanese pre-metabolist experiences of Kiyonori Kikutake and Kenzo Tange, stretching between megastructures and structural expressionism; in Israel, realizations featuring a a strong sculptural character such as the institutional buildings for Be’er Sheva, the new capital of the Southern District, built between 1948 and the early 80s, and the projects built by Arieh Sharon and Zvi Hecker between the 60s and the 70s; in countries entering the post-colonial phase of their history (mostly in Africa and Asia), the expressions of a public, or collective, architectural language that would positively embody a new dimension of independence; in the United States, the monumental expression of Yale University Art Gallery by Louis I. Kahn (1951-53) and buildings by Paul Rudolph such as the Faculty of Architecture at Yale University (1960-1963).

In the Socialist States, the brutalist label was given more or less appropriately to both the prefabricated solutions for large-scale public housing interventions, and the buildings representing the power and initiative of the State between late 60s and the 80s: ministries, public offices, but also hotels, infrastructures, productive plants.

The same need to stress the ethical aspect above the aesthetic one in all the projects defined as brutalist also applies to the Latin American context. Here, the large-scale use of exposed concrete building appears as a response to the sudden demographic explosion of metropolises, but different designers would give different interpretations: in Argentina, the poetics of Clorindo Testa were deeply rooted into deeply personal narratives; in Brasil, while the expressions by Oscar Niemeyer could be classified in the specific field of sculpture, the so-called Brutalismo Paulista (based in São Paulo, including architects such as João Batista Vilanova Artigas, Lina Bo Bardi, Paulo Mendes da Rocha) was founded both on the immediate availability of German and Japanese concrete building technologies, and — like all across Latin America — on the need to create sense for the entire urban systems through aesthetically relevant architectures.

While the approach of Paulo Mendes da Rocha in buildings such as his own house (Casa Mendes da Rocha, São Paulo, 1964) and the MuBE (Museu Brasilerio da Escultura, São Paulo, 1987), was mostly based on the priorities of construction and calculation, buildings such as the MASP by Lina Bo Bardi (Museu de Arte de São Paulo, 1958-1967) had the priority — later recalled partly by the MuBE — to create a public space for collective interaction, within an urban fabric where that kind of space would have otherwise been completely absent, to then shelter and emphasize such space with an impressive glass-and-concrete volume hanging from two monumental pre-stressed concrete portals painted in red.