“Nothing comes from nothing. ‘True’ cultural zero cannot be accomplished, it’s impossible, through a tabula rasa of traditional structures from one moment to the next (…). Authentic creative spirits have never zeroed out anything, they violently revolutionized, and revolution is violent subversion of the positive extant + the future” (Lina Bo Bardi, 1974) 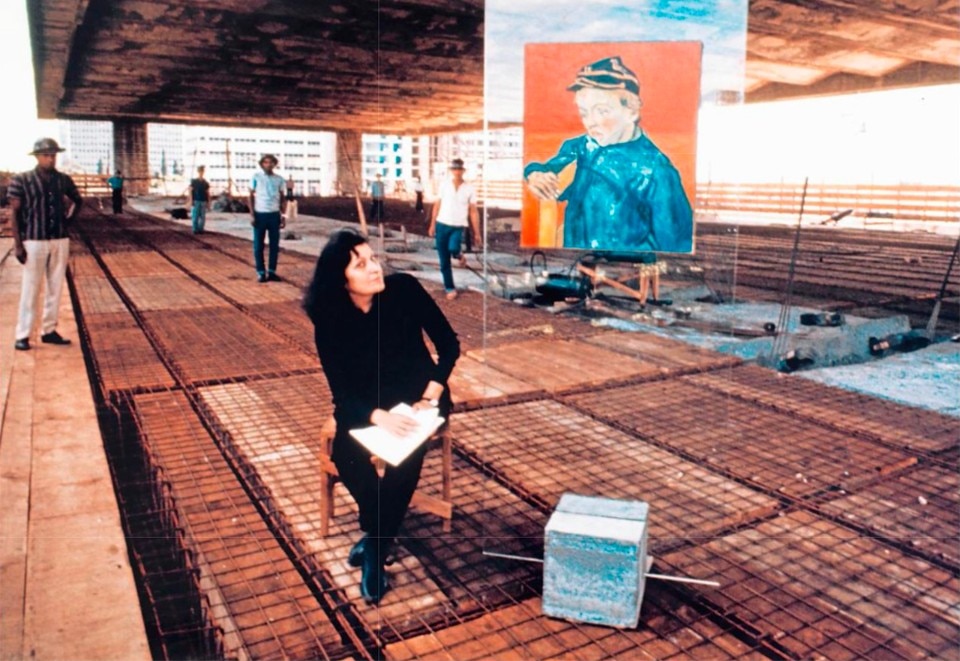 Lina Bo Bardi (1914-1992) was the wife of controversial art critic Pietro Maria Bardi and a collaborator of Italian design’s father Giò Ponti. Besides, the historiography of modern Brazilian architecture usually considers her as the female counterpart to the deservingly much-vaunted ante-litteram star architect Oscar Niemeyer. Regardless of the powerful men who framed her personal life, her career and her critical fortune, Lina Bo Bardi was possibly the most original and influential woman architect of the 20th century. She is one of the few female figures who earned herself a much-deserved place in the sun in the tragically gender-oriented histories of modern architecture.

Italy and Brazil: Bo Bardi was a (business class) migrant who established a fruitful link between her two countries. She was born in Rome as Achillina Bo and raised in the Italian capital, where she graduated at La Sapienza University in 1939. She moved to Milan in 1940, one of the somberest moments of the city’s history. Here, she rapidly integrated the vibrant local cultural milieu, getting in touch with both Bardi and Ponti. The latter connection lead to her briefly co-directing Domus with Carlo Pagani and contributing to Stile, an experience which added to her activity as collaborator for such magazines as L’Illustrazione Italiana, and as co-founder of A-Attualità, Architettura, Abitazione, Arte – in 1943, with Pagani and with the support of Bruno Zevi. Not long after the carpet bombing raids destroyed her office in via del Gesù, a new chapter for the Bo Bardi couple opened in 1946. Assis Chateaubriand, an entrepreneur and an art collector from São Paulo, hired Bardi to found and direct the city’s Museum of Modern Art. The newly-weds left the European continent once and for all.

Their involvement with the museum was a once-in-a-lifetime occasion for both Pietro and Lina, who was commissioned to design the institution’s premises on the Avenida Paulista. Conceived as a colossal glass bridge, suspended from two striking, bright red pre-stressed concrete beams, the MASP (1958-1967) is one of her most impressive projects. Below and above the platform lay a public square and the uninterrupted exhibition hall, two ideally boundless spaces of freedom, completed at a time when the military dictatorship had already overturned the ramshackle Brazilian democracy.

The MASP is an icon of the so-called paulista Brazilian architecture, as opposed to the carioca school, best interpreted by Niemeyer. In more general terms, it is a brutalist masterpiece by a talented architect. Yet, Lina Bo Bardi’s career largely exceeds the boundaries of a univocal style or movement, and of a single profession. In fact, by the time the museum came to light she had already approached many of the fields of creativity that she sought to explore. 1951 was a key moment in this respect. That year, she completed her first major architectural achievement, the Casa de Vidro, her own private residence nested at the threshold of the tropical forest, in the outskirts of São Paulo. It is a delicate, transparent stilt, a modernist glass box deeply preoccupied with the relationship between architecture and nature. The Bowl Chair, Lina Bo Bardi’s most famous piece of furniture, was designed at the same time specifically for the house, and originally realised in only two samples. Moreover, that same year she and her husband established the quarterly review Habitat, thus restating Bo Bardi’s interest in architectural journalism and criticism.

Read also: The celebrations for the centennial of her birth helped to refocus attention on Lina Bo Bardi, who was an ingenious architect, a designer of fantastic things and animals, a thinker, a graphic artist and a sophisticated set designer.
Sign up for our Newsletter and get domus in your inbox

The seven years that she spent in Salvador de Bahia, from 1958 to 1964, provided her with a deeper and more immersive insight in the culture and traditions of Brazil, which she famously defined as her “country by choice”, and therefore “twice times over”. Her projects in Salvador, many of which were built after she moved back to São Paulo, found a new genealogy of contemporary Brazilian architecture. They liberate it from the overwhelming influence of European modernism, and find its alternative roots in the previously overlooked pre-modern age of Brazil. In addition to countless exhibition and set up designs, Lina Bo Bardi’s architectural work in Salvador includes the renovation of the former Solar do Unhão as the new MAMB (Bahia Modern Art Museum) and Folk Art Museum (1959-1963), the Gregório de Matos theatre (opened in 1986), the Casa do Benin (1987) and the Coaty restaurant in the Ladeira da Misericordia neighbourhood (1987-1990). All of her projects from the 1980s are realised within the frame of the general plan for the historical city centre that she conceived right after its inscription in the UNESCO World Heritage List, thus proving able to deal also with the urban scale.

The extensive use of fair-faced concrete and the irregularly shaped openings, with no glass and no window frames, are the most distinctive features of Salvador’s theatre and restaurant, as well as of another outstanding design of the same period by Bo Bardi: the SESC Fábrica Pompeia (1977-1986) in São Paulo. The elevated walkways connecting the its two, filled with stacked sports halls, the red wooden shutters screening the holes in their concrete shells, as well as the water basin unexpectedly crossing the rehabilitated warehouses remain some of the most memorable images of Bo Bardi’s oeuvre. In the same city and decade, the last of her activity, she delivered what is probably the most socially, politically and culturally engaged of all her projects. The Teatro Oficina (1980-1994) subverts the spatial hierarchies of the bourgeois theatre: no boundaries exist between the performers, playing on an elongated internal street connected to the city, and the audience, occupying a light scaffolding structure overlooking it.

With this late work Lina Bo Bardi gets closer than ever to the idea of architecture that she had investigated and strove to put in practice all along her career: in her words, “a collective architecture, a cultural act that differs from the violent imposition of the culture of some upon others, as arrogant individualism”. A legacy of vital importance for today’s architecture, indeed, and a powerful antidote against its market-driven excesses.

In the words of Olivia de Oliveira:

The architecture of Lina Bo Bardi takes advantage of the unexpected, of chance, precariousness and a lack of resources. It is a kind of procedure very close to the folks way of doing things, to kitsch-type art, which works with the scarcity of means in order to arrive at maximum expressiveness. Lina Bo Bardi’s oeuvre offers a powerful critique of a society corrupted by consumerism