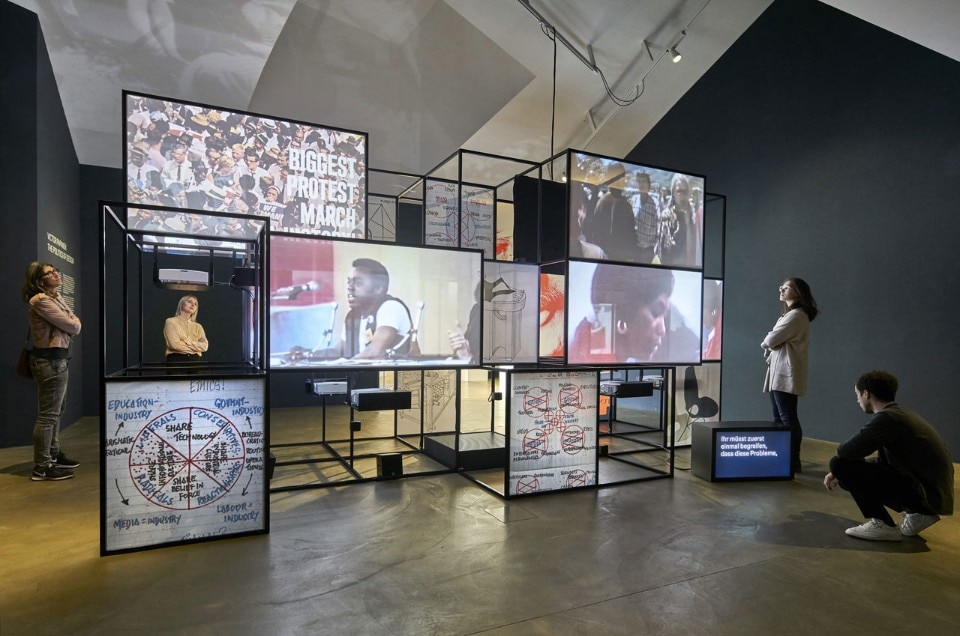 One of the best rooms at the exhibition “Victor Papanek: The Politics of Design” at Vitra Design Museum in Weil am Rhein (until 10.3.2019) is the last. It is where 20 contemporary works reflect the continuing resonance of the questions Papanek was already addressing in the 1960s. Papanek was born into a Jewish family in Vienna in 1927. After emigrating to the US under the threat of Nazism, he became a naturalised American. To him, design goes much beyond the single object; it is a process, a transdisciplinary system, an integral act that surrounds us. It is holistic, total, and respectful of people and the environment. “Everything is connected,” he liked to say.

So in the exhibition's last room, there are selected artists’ visions of the world. Cloud Cities by Tomás Saraceno imagines a future where cities will be built in the sky, in the clouds, like flying metropolises. Daisy Ginsberg creates a world of biosynthetic creatures. Also present are Forensic Architecture, Gabriel Ann Maher and Femke Herregraven. Digital technology is at our service, not the other way around. See HyperFace (2017), a patterned scarf by Adam Harvey and Hyphen-Labs. It creates false faces to distract computer vision algorithms. All the work in this last room is not only interesting for being commentary on society today, but also for transmitting the eternity of a valid example – Papanek’s. Artistic creation, designers and architecture can all contribute to improving our living conditions. All can have political value.

The exhibition opens with an educational room featuring Papanek’s biography. It tells about his life and what was happening in those years. His philosophy of design was not detached from the context, rather the world conditions were a fundamental part of his thinking. Papanek proposed a very effective practice, accompanied by a communication theory that was reduced to the bare minimum, because it was made up of lists. (He knew and worked with Marshall McLuhan, a great 20th-century medium theorist.) Amelie Klein, the curator of “The Politics of Design” at Vitra, says: “What was urgent in Papanek’s day is even more urgent today.”Of course, how could it not be so? Overall, the exhibition is a thematic exercise to answer the question “What can design do for society?” Surely it can benefit minorities, which to Papanek were people left out – women, children, the Third World and the elderly. He was also preoccupied by ecology and sustainability in a world increasingly obsessed by possessing new objects and where manufacturing took place at the expense of the environment. “No design stands mute. All design has social, environmental and ecological consequences,” said Papanek. In the middle of the first room, we find his book Design for the Real World (1971), translated into 20 languages and revised several times. This type of design is found in current-day initiatives such as “One Laptop per Child” (the Hundred Dollar Laptop) by Nicholas Negroponte and the Ocean Cleanup foundation that aims to remove plastic from the oceans. All aim to do good, be publicly useful, and banish waste. “The Autocomplete Truth” (2013), a digital campaign by the United Nations for women’s rights, is on display. The video shows how an actual Google search automatically completed the phrase “Women should” with terrible notions such as “stay at home”, “be slaves” and “be in the kitchen”. The auto-completion is real, because it is numerically based on actual searches, resulting in an unidealised picture.

Exhibits include what Papanek produced in addition to a proactive philosophy deployed toward bettering society. There is a prototype of a cube made to help children with brain damage learn motor skills; a chair for people with back problems; a carousel for children that allows them to help their mothers around the house (these were different times). We see photographs of the student protests at the Triennale di Milano in 1968, and the need for concreteness that Papanek proposes as an alternative to Italian “radical design”. The leitmotiv is that design must offer a better life. It must not be based on the reductive data produced by marketing. A 1969 poster for CalArts made by the American graphic designer Sheila Levrant de Bretteville reads: “If the designer is to make a deliberate contribution to society, he must be able to integrate all he can learn about behaviour and resources, ecology and human needs; taste and style aren’t enough.” This is still an appropriate message, now that humans are depicted as a series of data. As for the gender battle, Papanek was against the female quota instituted at the design school he headed, saying it ghettoised women. Today, the discussion about female quotas is still far from over. The strong suit of this exhibition is that it unites Victor Papanek’s theoretic explorations with practical answers from contemporaneity. It’s a reminder of how (design) solutions might change with the times, but the demands do not.