In the Sixties, Richarsd Meier converted the former Bell Labs into the world’s largest housing facility for artists, where Diane Arbus lived and Tom Waits rehearsed in the basement. Writer and photographer Kurt Hollander, who grew up in Westbeth, retraces the story of this incredible building. 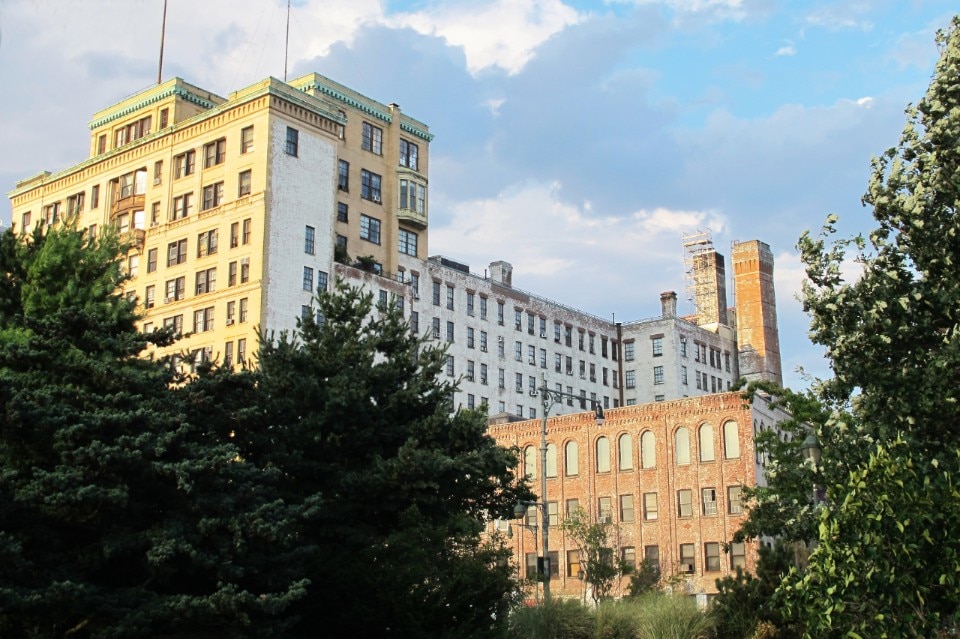 My family was one of the first to move into Westbeth, a recently converted industrial building occupying a whole city block right across from the Hudson River in the West Village in the winter of 1971. The home where my siblings and I grew up in, and where my mother lived for the last 50 years of her life, was a 1,000 sq foot duplex apartment with 12-foot high ceilings, giant windows, and lots of light. With a monthly rent well under a thousand dollars all the way up until 2021, there were few real estate deals as sweet as this in all of Manhattan.

The bulk of the building is divided among thirteen floors and a number of wings and sections, serviced by three sets of industrial-sized elevators and dozens of stairways. Within the ground there is a labyrinthine basement of exposed pipes snaking down long hallways and whole rooms occupied by heavy machinery pounding away day and night. Multiple rooftops are crowned with giant water towers and have views that extend over all of downtown Manhattan and across the river deep into New Jersey. At its base there is a huge concrete courtyard and playground, and several different entrances. The building, unlike any other in the neighborhood, and few others anywhere else in NYC or the continental United States, is inhabited exclusively by artists.

When the building first opened its doors to low-income artists in 1970, the photographers Diane Arbus, Leonard Freed, and Bob Gruen, the theater director Joseph Chaikin, the Shakespearean and Blaxploitation actor Moses Gunn, the political artist Hans Haacke, the writer and member of The Fugs Ed Sanders, and jazz composer Gil Evans all moved in. Merce Cunningham, choreographer and dancer, had his studio and offices on the building’s 11th floor rooftop since the building opened, and early on Tom Waits, The Lounge Lizards and The Bad Brains all rehearsed in studio spaces in the basement.

Westbeth was designed as an experimental community where, thanks to subsidized rents and ample space, artists could avoid commercial and financial pressures and produce their artwork in their own homes. The conversion of industrial space into artist’s lofts would in turn change the real estate and lifestyle of neighborhoods such as Soho and Tribeca in the 70s, and forever change the concept of artist housing.

Before it became Westbeth, however, the building was for years the site of technological and scientific research that would propel the city and the country into the 21st century.

By the beginning of the 20th century, the waterfront area around what would become Westbeth was among the world’s busiest ports, with the largest concentration of marine enterprises anywhere. Because of the easy access to shipping and transportation, including an elevated highway directly in front of the building and an elevated train line running right behind it, a cluster of factories and industrial complexes set up shop on the block upon which Westbeth squats, a hodgepodge of structures.

In 1925, Bell Telephone Laboratories bought up the various buildings and lots on the block, which included an elevated train line that enabled Bell’s factory to exchange parts and products with the rest of the world. The project of melding the existing structures into one industrial complex was given to Cyrus Lazelle Warner Eidlitz, a New York City architect who had built several synagogues and who would go on to build the original New York Times Building in Times Square, the largest building of its time.

The research, design, and engineering departments of Bell Laboratories were concentrated within the building. With 4,000 scientists and technicians working in the building, it was where most of the company’s futuristic innovations and inventions were born. The Victor Talking Machine was designed in 1925, an invention that later led to high fidelity long-playing (LP) records and the record-playing stylus. The first stereophonic system was also developed in the building.

The sound for the first talking picture, The Jazz Singer, was produced and screened in a theater within the building, and tours of the studio were organized for famous actors and nobility, including the King of Siam. In 1929, Bell Labs developed color television and ten years later it produced the first digital computer. Loudspeakers, public address systems, hearing aids, and the first vacuum tube amplifier (making possible long-distance telephone transmission), were all also invented inside its walls.

In less than half a century, the inventions created within this one building revolutionized communications and the technology that would become essential for the arts, especially music and cinema. In 1941, the lab moved its headquarters to New Jersey.

In 1966, aiming to help artists find affordable living and working space in NYC, the federal government funded the conversion of the former Bell Labs building into low-income, government-subsidized artist housing. At that time, the project was the first and largest reuse of an industrial building for residential purposes ever undertaken in the United States. Westbeth remains the largest artists’ housing facility in the world.

Inspired by Le Corbusier’s Unite d’Habitation in Marseilles, architect Richard Meier converted Bell’s offices and research laboratories into 383 residential units – both duplex and single-floor loft spaces – plus galleries and theaters, with studio and storage space in the basement. The concept of reconverting industrial buildings into housing units had an immediate impact on the city’s art world, serving as an inspiration for the creation of artist lofts in the formerly industrial neighborhood of Soho in the 1970s.

Despite the groundbreaking nature of this project, Westbeth’s industrial structure always seemed a bit dirty and distinctly unglamorous, especially the basement and rooftops, and the same was true of that part of the legendary, bohemian Greenwich Village. When my family moved into Westbeth, the building stood at the edge of a largely abandoned neighborhood within a bankrupt city overrun by garbage, rats, and gangs. The Greenwich Village waterfront had already lost its privileged place within world maritime commerce. The huge riverfront warehouses and piers were abandoned, the city’s industry had slumped and hundreds of factories had closed shop; the elevated West Side Highway had ceased to function as a roadway, and trains no longer rode the elevated tracks.

With the economic boom of the 1980s, the neighborhood’s proximity to Wall Street and the World Trade Center, and the fact that the riverfront area of Greenwich Village, originally being landfill, was not covered by strict conservation policies that kept development in the rest of the neighborhood under control, caused the area around Westbeth began to undergo a real estate boom.

The elevated highway and most of the giant old warehouses were torn down during this and the following decade, and at the start of the 21st century, a park and promenade were built along the Hudson River waterfront; the meat markets a couple of blocks away were razed and transformed into prime boutique retail properties; and the elevated train tracks were converted into the tourist-friendly High Line gardens.

With the global economy doing well and the Manhattan real estate market going through the roof over the last couple of decades, the area around Westbeth became ground zero to one of the quickest and largest real estate bonanzas the city has ever seen.

Jane Jacobs, New York City’s great urban theorist, lived in Greenwich Village for much of her adult life. Jacobs emphasized the need for neighborhoods to retain a mix of commercial activities, architecture, income, race and age of its inhabitants, and was one of the leading promoters of Westbeth in its planning stages. Her vision of a healthy, productive city has since been made obsolete by city planners and developers who have converted the neighborhood around the building into one of the city’s most homogenized, gentrified areas. Westbeth residents, the majority of them elderly, low-income tenants, and a large percentage of them non-white, became poor, odd characters in a yuppie paradise.

Although Westbeth’s building was designated a New York City landmark in 2011, this only underscores the extent to which its life has been reduced to mere words on a plaque. The transformation of this area of Greenwich Village into a high-end consumer and tourist paradise has ended the diversity and cultural production that characterized downtown Manhattan throughout most of its history.

There is perhaps no better embodiment of this shift from production to consumption than the arrival of the Whitney Museum, a giant bluish-grey steel and glass mausoleum designed by starchitect Renzo Piano to stand out and above the mostly functional, industrial architecture around it, just a couple blocks from Westbeth.

The building that houses Westbeth will surely survive for decades, but the original project of providing living and working space for lower income artists is slowly fading as the original tenants die and the apartments are often rented to non-artists. The same has occurred in Greenwich Village and much of New York City over the past few decades, and the city’s role as a center for art production has also faded away into nostalgia and a real estate promotion of its bohemian past.

Read also: The white towers of Cartagena, symbol of a two-faced city

Kurt Hollander is a writer and fine art/documentary photographer. This text is from an unpublished collection of autobiographical essays about NYC and Mexico City entitled From Downtown to El Centro.