The white towers of Cartagena, symbol of a two-faced city

The Colombian city is booming, but only when it comes to its touristic side. And behind the glamorous skyline of the peninsula hides inequality, poverty and a damaged ecosystem. 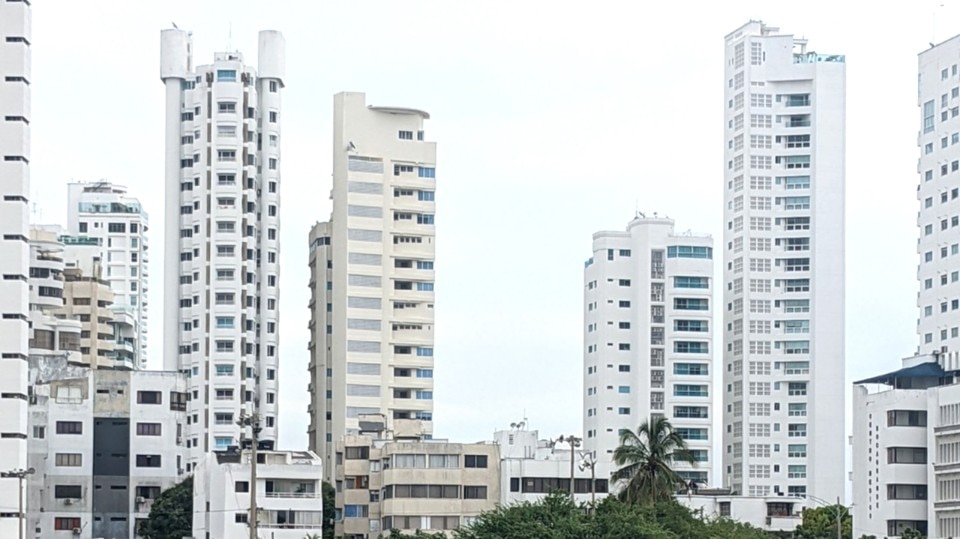 From the 16th up until the 20th century, Cartagena de Indias was one of the most important ports in the Americas (responsible for, among other things, the introduction of millions of African slaves) and was the largest industrial center on Colombia’s Atlantic coast. As a sign of the times, however, in 1991 the city had its name officially changed to Cartagena Tourist and Cultural District, having already become the most sought-after tourist destination in the country.

Cartagena receives one million tourists each year, a floating population equal to the number of inhabitants within the city. Cartagena is often referred to as a “two-faced” city for its sharp economic and geographical division between rich and poor, or better yet, between the tourist world and the rest of the city. The city suffers from serious urban blight caused by a population explosion and a lack of city planning, including constant traffic jams, air and water pollution, and a lack of affordable housing. Within the city’s limits, 65% of the inhabitants have trouble meeting their basic needs, 12% of all homes are located in high-risk areas and 70% are affected by flooding.

Nonetheless, the value of real estate within the city has skyrocketed over the past couple of decades, and Cartagena now sells more residential units than any other city in Colombia. This boom within a busted city, however, is restricted to the tourist areas, especially those stretched out along almost endless white-sand beaches. From 2011-2015, almost half of all new constructions were built in the tourist areas of Cartagena, with one quarter of all constructions destined for the wealthiest classes. Almost 90% of these constructions were of apartments rather than houses, and the single home “mansions” that had characterized the city for decades have almost all been replaced by residential towers.

Within the city’s limits, 65% of the inhabitants have trouble meeting their basic needs, 12% of all homes are located in high-risk areas and 70% are affected by flooding.

The greatest real estate development has occurred in the beach-front neighborhoods of Bocagrande, Laguito and Castillogrande, a long, thin peninsula that extends between the Atlantic Ocean and the Cartagena Bay. In 1967, there were 500 tourist units for rent in the area, but by 1997 there were 4,500. In the first decade of the 21st century, luxury towers on beach-front property skyrocketed, with an almost 50% increase annually, the fastest growth within the tourist sector in all of Colombia. In 2012 alone, 40 luxury hi-rises, with an average of 20 floors, were built in on the peninsula, containing areas for socializing, gyms, jacuzzis, cinemas, game rooms, kiddy parks, security cameras and armed guards.

The investors and constructors of these towers are mostly Colombians while those who buy apartments in these white towers tend to be wealthy Colombians, Europeans or gringos. Property values of these towers reaches 20% a year. There has been strong government support for these constructions, through tax breaks, loans and subsidies, and an easing of restrictions on licenses, permits, types of constructions allowed, and environmental impact. The corruption that paves the way for ever bigger constructions is reflected in the number of mayors that have come and gone over the past two decades, many still in jail.

In the 1970s and 80s, the local government ordered all buildings in the historic center of Cartagena to be painted white in order to simulate Spanish coastal cities and to rid the city of the bright colors that reflected its African and indigenous heritage. In the 1990s, to part to increase cultural tourism to the area, the historic center regained its multicolor facades. For the past couple of decades, however, all of the tall towers in the beach areas have been built bright white.

Although Cartagena has a black population of 35%, the beach peninsula is an “exclusive” social and economic outpost of white-sand beaches, white luxury towers, and white wealthy owners or tourists, served mostly by people of color who work in lowly jobs within the tourism industry. These white towers generate almost no economic and social benefits for the city’s inhabitants, and increasingly concentrate capital within the hands of the capitalists that finance them, the conglomerates that control construction, and the politicians involved.

The weight of man-made construction on the Earth's surface now outweighs all of nature, and nowhere is this so true as in the white tower neighborhoods of Cartagena.

The high-rise luxury towers that stretch from one side of the peninsula to the other, rivaling the skyscapes of Miami and Panama, are condos, though most of them operate as hotels, with guests tagged with wrist bands and given keys to generic, no frills apartments within the luxury towers. The building administration charges a fee for all “guests,” and provides extra beds, sheets and pillows when needed. Owners often purchase their apartment or apartments in order to rent them, through real estate agents, making secure, profitable investments all year round.

These luxury units might be a good investment for certain individuals but they are not self-sustainable. The stress placed on local resources to satisfy the demand of this huge floating population of consumer-hungry tourists has wreaked havoc not only on the city, but also on the ocean, bay and other waterways, as well as on their flora and fauna. Although not the fault of the tourist sector, the Cartagena Bay is contaminated by heavy metals (such as mercury, lead) dumped by the industrial parks located near the port and by parasites that make their way into the fish served to tourists. The mangroves located at the ocean’s entrance to the lake in the middle of this thin peninsula regulate the salinity of the water, but high levels of sedimentation has made it stagnant to such a point that it has turned a bright red, putting at risk the lake’s ecosystem of birds and fish, and acting as a breeding ground for mosquitos.

The weight of man-made construction on the Earth's surface now outweighs all of nature, and nowhere is this so true as in the white tower neighborhoods of Cartagena. The tons of concrete within the high-rise towers raise the ambient temperature in the area and thus affect rainfall, causing added flooding and a lack of drinking water, and puts a strain on drains and sewers. With an even minimal rise in the sea level, this beach-front peninsula will be one of the areas most affected, suffering increased flooding and coastal erosion leading to the loss of beaches, the area’s main attraction and the base of its economy.

As a sign of what’s to come, the tallest, newest, most expensive white tower currently under construction is located on a curve in the only road from the beach peninsula to the center of the city, a road which is constantly swamped by sea water, halting traffic and eating away at the infrastructure and underground pipes.

If concrete constructions keep apace on this long, thin strip of land, and if climate changes pass a certain point of no return, these white castles built on sand will slip into the sea, eventually.

Read also: An artificial extension of Manhattan to save New York City
Share