Appeared for the first time on Domus in 1949, the building of Marseille encouraged Milanese architects to engage in an imaginary dialogue with the Swiss modernist. 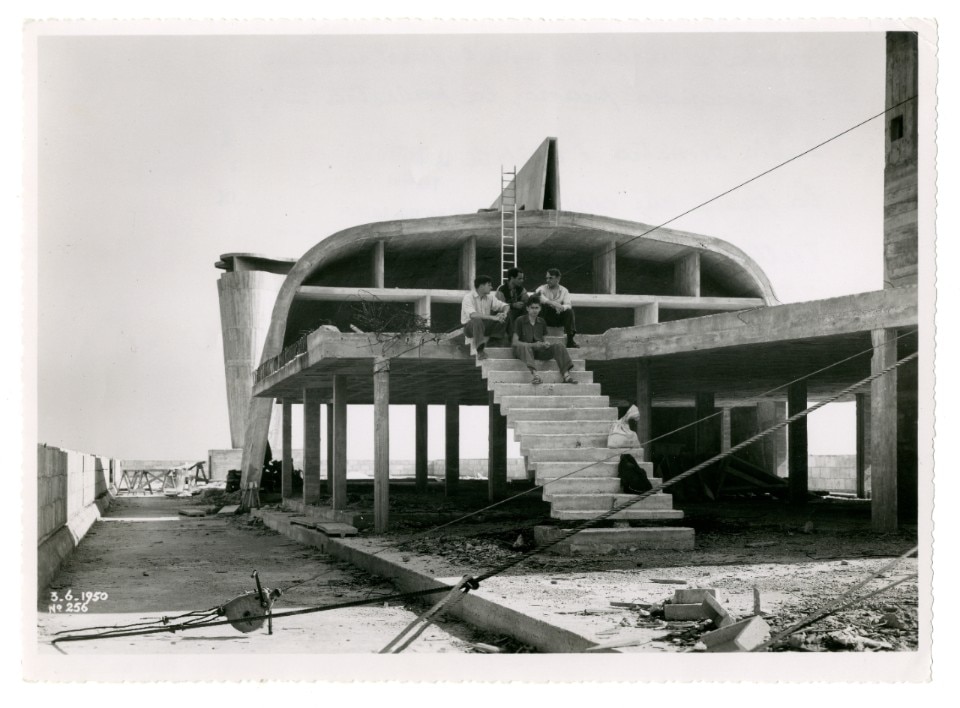 Le Corbusier’s impact on Italian architecture should not be underestimated, but a look at references in Domus to the Unité d’Habitation at Marseilles (1947-1952) suggests that instead of imitating Le Corbusier’s forms, Milanese architects engaged in an imaginary dialogue with the Swiss modernist to develop their own positions. For instance, an unrestrained embrace is implied by Carlo Belli, whose memoir recalled that the young Gino Pollini and all of Gruppo 7 “practically memorised” Vers une architecture in the 1920s, as they united “in the name of Le Corbusier” (Domus 687, 1987).

But drill down into it and the praise was more equivocal. In three essays by Gruppo 7 member Carlo Enrico Rava, enthusiasm alternates with scepticism. Rava praises Le Corbusier’s “Mediterranean” spirit (Domus 40, 1931) and the “Rousseau-ian” character of his villas (Domus 74, 1934) but points with disdain to his seeming affinity for Russian constructivism (Domus 37, 1931).

Gio Ponti published the first images of the Unité in Domus and his endorsement in a 1949 editorial was unequivocal in its command to “go to Marseilles” (Domus 235, 1949). The project’s publication before completion is a credit to the media acumen of Le Corbusier, whose advocacy through the 1940s for the integration of sculpture, murals and other art into buildings – and encouragement of the rough surface in architecture – helped to elevate the value of exposed concrete. A help in this regard were black-and-white photographs of the Unité by Lucien Hervé, which celebrated the marks left in concrete by formwork and hand-wielded trowels that might otherwise have been scorned as unsightly blemishes.

Ponti had promoted Le Corbusier throughout the 1930s and evidently felt the urgent need for proposals by architects for Milan’s bomb-battered streets. But it must have been clear to the attentive reader that a Unité-sized housing block would not work in Milan. At 140 metres long and 52 metres high, it was twice as broad as Milan’s Central Station and over 20 metres taller than the 32-metre Galleria Vittorio Emanuele II.

Ponti had promoted Le Corbusier throughout the 1930s and evidently felt the urgent need for proposals by architects for Milan’s bomb-battered streets. But it must have been clear to the attentive reader that a Unité-sized housing block would not work in Milan

Instead of copying the Unité, Milanese architects would negotiate their small sites with the aid of a roof terrace, open ground-floor level, internal street, or another of the Unité’s many ideas. Luigi Figini and Gino Pollini’s apartment block on Via Broletto, a case in point, makes brilliant use of a three-dimensional concrete grid structure (Domus 239, 1949). The building is distributed between two volumes to sit without compromise in a row of street-facing facades, while extending to its full height within the block. The result, celebrated by Ponti in 1949, recalls Giuseppe Terragni’s Casa del Fascio as well as Le Corbusier’s bold use of structure as a graphic and tectonic frame in the Unité.

The Unité was glimpsed in other projects here and there as Milan’s economy rebounded and its skyline rose, after the post-war reconstruction. Ponti spotted it in Giorgio Ramponi’s Palace Hotel, a great slab of a building whose columnar pilotis form its lobby (Domus 249, 1950).

Another writer saw the Unité in the Hilton Hotel in Istanbul, by Skidmore, Owings & Merrill, with its combination of rooms, shops, banks and travel agencies (Domus 318, 1956). Some years later in Vienna, the Unité returned as a rhizome, in a horizontal housing block that wound around the chimney of an abandoned coffin factory. “While the monumentality of Le Corbusier’s ‘Unités’ became [the inhabitant’s] tombstone,” the author assures us, “the Sargfabrik project is very successful” (Domus 809, 1998).

Sightings have happened in far-flung places such as Cambridge, Massachusetts, where a tall block of student housing surged on the edge of a sports field (Domus 858, 2003) and New York [the 40 Bond apartment building by Herzog & de Meuron] and Tokyo [the Seijoville townhouses by Kazuyo Sejima], where small buildings with private gardens formed multifamily aggregates (Domus 910 and 915, 2008). The theme of these is a community’s physical and logistical construction in an architect’s monolith.

As with any fugitive, each fleeting appearance of the Unité only deepens the mystery of its future. Jacques Lucan, reviewing a project for a new town hall in Rezé, Nantes, observed how Alessandro Anselmi used a large, wedge-shaped municipal complex to bring new life to the adjacent, previously isolated Unité at Nantes (Domus 710, 1989). Of all the references to the Unité since the 1950s, this one comes closest to engaging Le Corbusier as the rationalists had done, confronting the nature and scope of architecture.