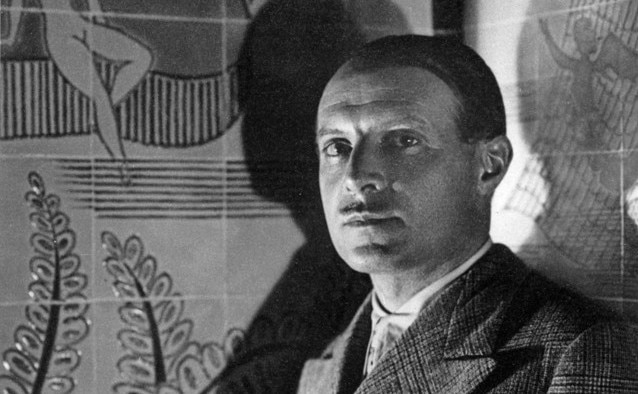 Giovanni Ponti, known as Gio, was born in Milan on 18 November 1891, and graduated in architecture in his home city, at the Politecnico di Milano (then known as the Regio Politecnico) in 1921. Shortly afterwards, he began a long-term collaboration with his friend Emilio Lancia which was to lead to the setting up of a professional firm where, for a short while, Ponti was to also be associated with architect Mino Fiocchi.

The relationship with Lancia continued until 1933, the year which saw the foundation of a new studio which Ponti ran together with Eugenio Soncini and Antonio Fornaroli. In 1945, Sonci left the studio and was replaced seven years later by the young architect Alberto Rosselli, who was to remain with Ponti and Fornaroli until his premature death in 1976, not long before the death of Ponti himself, three years later in Milan, on 16 September.

In parallel with his intricate professional life in the field of architecture, Ponti also concentrated on extending his personal interest in art (in particular in painting) and crafts, to then become a designer through a chance encounter with the management team of the Richard Ginori Ceramics Works.

The Sesto Fiorentino based company with which Ponti worked from 1923 to 1930, radically overhauling its entire production, became the ideal venue for cultivating his growing passion for ceramics, one which was to accompany him throughout his career. He elaborated interesting reflections on the application of this material to the designing of building façades and the entire city, which were masterfully summarised in “Amate l’Architettura” (published in 1957) and completed in a period – following the second world war – in which international standards demanded the use of cement of the construction of endless curtain walls in glass and steel.

The production lines created for Richard Ginori were innovative yet traditional: plates, vases and small table-top sculptures were all created with the most advanced techniques, but were inspired on the one hand by artisan traditions and on the other by the shape of ancient medallions, urns and classic states, and were populated by sinuous figures set in vaguely architectural settings which were accented with designs of colonnades, pergolas or entire basilica (for example the celebrated “Vaso delle donne e delle architetture”). The impact of these initial works was such that as early as 1923 Ponti’s work for Richard Ginori was presented at the Monza Biennial for Decorative Arts, in international magazines and, in 1925, was awarded the Grand Prix at the Exposition des Arts Décoratifs in Paris.

Soon after, in 1928, Ponti produced one of his longest-lasting and successful creations, the magazine “Domus”, which very quickly became one of the most important publications dedicated to the theme of contemporary living. The initiative was presented with a celebrated leading article. Entitled “The Italian-style home”, it is a true manifesto of Ponti’s ideas according to which art, architecture and design should merge together to create an environment which offers comfort, not so much in terms of the mechanical application of standards in dimension which guarantee the minimum necessary living space, but rather the comfort necessary to also nourish the soul of modern humankind, in accordance with classic Italian tradition.

This is why the pages of Domus – the name being a clear reference to the positive archetype identified by Roman habitats – contain the widest possible variety of works which do not necessarily have to respond to internationally-recognised ideas of beauty in order to be worthy of publishing. What they do however have to have in common is a spirit of modernity in its various forms. Not only houses or condominium apartments, but also bridges, factories and electricity plants, all considered to be beautiful because they are modern, exactly like the work of artists that Ponti was particularly fond of, such as Fausto Melotti, Piero Fornasetti or Massimo Campigli.

In his role as the director of Domus, Ponti often found himself in particular intellectual affinity, an affinity which often became personal friendship, with some of the most well-known names on the international scene, figures he got to know very well indeed. These included Charles and Ray Eames and Bernard Rudofsky. He credited the latter with having inspired his reflection on the theme of the “Mediterranean character”, which was a fundamental factor in many designs created from the 1930s onwards: “The Mediterranean taught Rudofsky, and Rudofsky taught me”, he wrote in one of the most celebrated editions of “Aria d’Italia”.

The works from this initial phase of Ponti’s professional life, which was heavily influenced by his ties with the members of “Novecento” (among others, Massimo Bontempelli and Giovanni Muzio), include the items of furniture from the series “Domus Nova”, which were produced for the department store “La Rinascente” (1927), the artistic glass for Christofle and Venini, the Bouilhet villa in Garches (1925-1926) and the iconic Casa in Via Randaccio (1924-1926), the first of four homes which he built and lived in with his family and a clear attempt, partially disowned by Ponti himself in the 1950s, to renovate architecture through a return to the humanist matrix, inspired – according to Ponti – by the “enormous impression made on me during my time spent during the war, while on leave from the front, in buildings from the Palladio period, with the possibility of examining them as much as possible”.

This was the source for the many neoclassical elements (niches, urns, trabeations, gables, denticulations, aedicules) which appeared in an almost ironic manner on the façades and determined the spirit of “vivacious light-heartedness of a decorator” identified by Ferdinando Reggiori in the figure of Ponti in the 1920s.

La casa adatta of Gio Ponti, Molteni&C
From the archive, letter exchange between Gio Ponti and architect Carlo Slama, 1952 "Everything in the world must be colourful"
“Gio Ponti: a cover story”, exhibition view

The following decade saw the Milanese architect actively involved in the organisation of the recently-founded Milan Triennale, an offshoot of the Monza Biennale in which he participated in 1923, and in the promotion of a new model of urban quality realised through the construction of a few, yet important, “typical homes” or “domus” in Milan in Via De Togni, Via Letizia, and Via del Caravaggio. Created to be repeated in series, the “Domus” are apartment houses inspired by the street-garden concept, thanks to the succession of green areas between each block and the road destined for circulation. A model of linear housing in which the various individual units all have common features such as balconies, terraces and windows which, despite varying autonomously block by block, reflect consolidated characteristics from Italian tradition because, as Ponti wrote in 1943 for Stile: “Italy has nothing but its civilization to save its civilization”.

After the terrible crisis which followed the second world war, Ponti became an active player in the debate on reconstruction, which he began to examine as early as 1944 with the publication of “Cifre parlanti”, or, the following year, with “Verso la casa esatta”. However, he had few opportunities for the effective practical application of this theories to the theme of collective housing. In the fervent environment of the construction of new districts in Milan, his only opportunities were to design – together with Luigi Figini and Gino Pollini – the extraordinary settlements in Via Harrar and Via Dessiè (1950-1955).

He was however one of the most sought-after figures by important industrialists, who entrusted him with commissions such as the extension of the offices for Montecatini (completed in 1951) or the construction of Palazzo Montedoria (1964-1970), as well as, obviously, that which is probably the most famous and controversial of his works built in Italy: the new Pirelli headquarters (1952-1961), an exceptional example of harmony between architects (Ponti, together with Fornaroli, Rosselli, Valtolina and Dell’Orto), engineers (Arturo Danusso and Pierluigi Nervi), and client, in the construction of the Italian model of modern architecture par excellence, or rather the skyscraper. A building which was not particularly well-received by a significant number of Italian critics of the time (one infamous example was the disdainful comment by Bruno Zevi who defined the skyscraper as an enormous drinks cabinet), but which is universally recognised as representing the theories on the integration between art and technique, on the different perception of day and night-time architecture, and to the finished form.

Thanks to the fame gained abroad with the Pirelli building, Ponti’s commissions from foreign countries began to multiply, including many examples of Italian-style homes: the famous Villa Planchart in Caracas (1953-1957), now perfectly conserved, even internally, or the more unfortunate Arreazza (1954-1958, also in the Venzuelan capital) and Villa Nemazee in Tehran (1957-1964) which now, after years of neglect and abandon, risk being razed to the ground despite the fierce opposition of many associations which have been set up in its defence.

The 1950s also saw the first experiments on the theme of the church, which was to reach a peak towards the end of Ponti’s very long career. The last - and important - building he designed was in fact the Co-cathedral of Taranto (1967-1970), in which the theme of the skylights - those majestic diamond-shaped cuts which frame sections of blue -, which was already examined with the Milanese church of San Francesco d’Assisi al Fopponino (1958-1964), becomes an enchanting embroidery chased with “windows opening onto the immensity, the dimension of the mystery”. This period was also characterised by the church in Taranto and the Denver Art Museum in Colorado, which was completed in 1971.

In addition to all of this, between 1936 and 1961, Ponti was a professor in the Architecture department at the Politecnico di Milano.

In the words of Italian architect and historian Fulvio Irace: “There was no-one who managed to express the spirit of Milan quite like him, distilling the atmosphere of the city and raising its aspirations to modernity, at the same time channelling the ambitions of the upper class towards an authenticity of expression which was never to be seen again in the years to come following his death in the home in Via Dezza. “Modern Milan” was the slogan that summed up his impatient search for a technical culture which expressed a culture of customs, in an interesting balance between modernity and expressive sincerity to which he always attributed the meaning of a grass-roots revolution. The acceptance, above all individual rather that of the masses or the classes, of that which, before him, Giuseppe Pagano had defined as “the benefits of modern architecture.”