“All Memphis designs are positive gestures with a statement to make. And yet they are not critical, in the way of former radical and conceptual styles” (Barbara Radice, 1981). 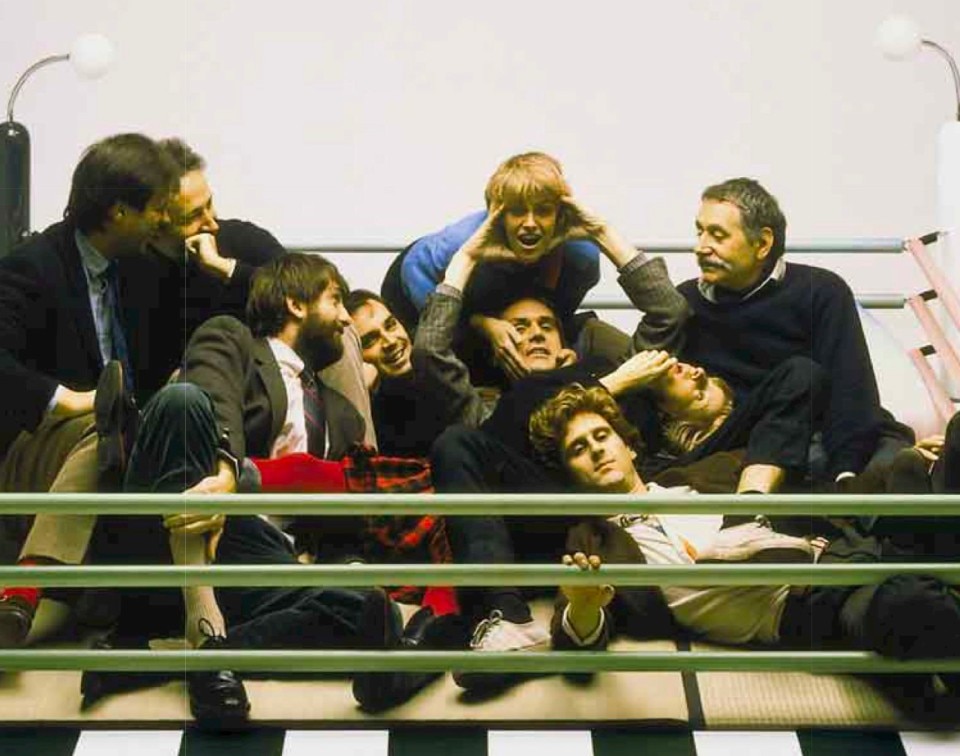 Strictly speaking, Memphis is neither a movement nor a full-fledged style. It is rather the experiment of a group of designers, who founded it as a platform for critical reflection and project, aimed at challenging the aesthetics, the materials and the modes of production of their age’s industrial design.

Two figures play a crucial role for the establishment and the success of Memphis: Barbara Radice (1943), a journalist, and the group’s coordinator and art director, and Ernesto Gismondi (1931), the founder of Artemide and Memphis’s president, ensuring it a much-needed link to the world of manufacturing.

The founders of Memphis themselves recount an anecdote to explain why they choose this name. During their first meeting in 1980, a vinyl of Bob Dylan’s Stuck Inside of Mobile with the Memphis Blues Again was played several times, as the record player repeatedly got stuck. Memphis is both the name of Aretha Franklin and Elvis Presley’s birthplace, and of Egypt’s ancient capital. They adopt it as representative of their approach, which combines references to history and contemporaneity, and tries to establish a link between the high and popular culture of design.

Memphis launches its first collection, made of 55 objects, at Brunella and Mario Godani’s Arc ’74 gallery on September 18, 1981, on the occasion of that year’s Milan Furniture Fair. The public can observe for the very first time some of the most iconic of Memphis’s objects, including the “Casablanca” and “Carlton” libraries by Ettore Sottsass and Martine Bedin’s “Super Lamp”.

Later that year, Radice coordinates a tight sequence of exhibitions, to show the collection in different cities worldwide, and more importantly she edits the volume Memphis: the New International Style. The book has the goal to promote the group’s activity, as well as to clarify its philosophy. Since its very title, a clear stance emerges, on the will to take a distance from modernity and its instances of functionality and formal reduction.

Before founding the group, Sottsass and De Lucchi deal with these topics while they participate in the experiences of the 1970s Italian radical anti-design, for instance within Alessandro Guerriero’s Studio Alchimia. With the other members of Memphis, they continue their experimental research and take it to its extremes, especially on the plan of its aesthetics and material choices. Memphis draws inspiration from a wide range of sources, spanning from Art Déco to Futurism and Pop Art. It also fully embraces kitsch, while clearly contrasting the codified rules of “good design”.

Memphis can be considered as one of the greatest expressions of Postmodern design in Italy and worldwide. This is precisely because of its formal “inclusiveness”, leading to the multiplication and the surprising pairing of “signs”, forms, colors and patterns selected within the many catalogues offered by history and modernity. Furthermore, based on a quintessentially pop vision of design, targeting the masses rather than the élites, Memphis often recurs to simple materials, such as plastic laminate and terrazzo.

Read also: More than a classic retrospective, the New York Met Breuer’s exhibition dedicated to Ettore Sottsass is an exploration into the jungle of the Italian architect and designer’s interests.

The group’s first appearance triggers mixed feelings in the field of criticism, as it was wholly predictable, but the feedback from a wide audience is of enthusiasm and interest. Almost no object by Memphis has ever been manufactured in series, but their cultural impact is powerful and long-lasting, to the point that the popular imagery adopts them as the embodiment of their decade’s aesthetics.

In 1985 Sottsass leaves the group, which dissolves officially in 1988, after presenting one collection at each Milan Furniture Fair. Memphis is universally considered as a breakthrough moment in the history of design, both for its ironic attitude and as a substantial enterprise of criticism against the status quo.

In the words of Stefano Casciani:

This is all, of course, easy to talk about now, but at the time it sounded like heresy. Indeed some suggested rounding up the culprits and burning them at the stake for this threat to the modern tradition. In the environs of the very temple of the design Kultur, the Milan Furniture Fair (…) people were engaged in what amounted to pagan rites and under the aegis of an undisputed Founding Father of Italian design. But the outrage was quickly overwhelmed by the popular response