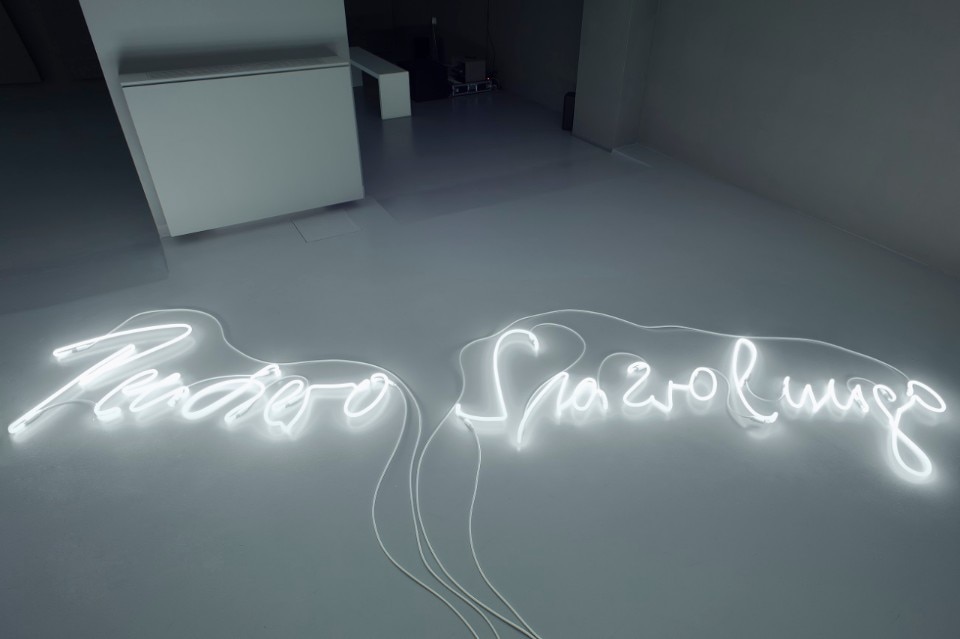 In “The last days in Galliate” exhibition, Leonor Antunes (1972, Lisbon) develops a kind of tracing, a transferring of specific geometries from one space into another establishing a close dialogue with Hangar Bicocca’s armour. She applies this methodology through linear drawings transliterated into brass, leather, bamboo and rubber, amongst other materials. These drawings in three dimensions are actually hanging from the ceiling and standing and ling on the floor; they are harmoniously grouped together to create an impression of volume, occupying a space. A complex research process, partially enlightened by her direct words.

When and exactly where did your research on Modernist stilemas begin?
I’m not interested in Modernism per se, I’m more concerned on how certain artists, designers or architects have been refined, during that time, their researches on forms and surfaces, in order to organize a kind of resistance against the idea of industrialization. The artists I’m interested in, worked in the Modernism historical period, focusing their own knowledge and competences on craftsmanship, as a form of antagonistic production against standardization and industrialization advance. But my approach is not voted to enhance their nostalgic way of generating projects: they introduced something new extracting it, evoking it from their own idea of the Past. This is the criterions I’m peculiarly fond of. In “The last days in Galliate”, I’m also creating connections with artists from the British Constructivism wave, even though I pursued more accentuated researches on figures like Franco Albini and Franca Helg.

And how architects Franca Helg (1920-1989) and Franco Albini (1905-1977) represents inspiring sources for your new installations into Shed?
I’ve been involved into their practices and projects for many years. I also realized a specific intervention, in 2013, peculiarly based on Albini’s fair boots design. Architects used to work on those kind of structures because they were profitable interventions. And of course he was invited to design many different settings, also for Institutions such as La Triennale di Milano. Studying those kind of modules, for a fair I was personally running through, I had the idea of applying, of directly adapting one of the Albini’s designed boost. I was meant to fit, in few squared meters, my concept of separating the space, formulating a series of suspended frames. Moreover, Albini’s approach is strictly connected to Lina Bo Bardi’s Brazilian practice and projects. They were friends: she worked for Domus with Gio Ponti, when they first meet, and afterwards she invited him to realize his first and last exhibition in Sao Paulo. They both shared lots of similarities on conceiving installations and displacements for public museum collections of antiquities, between Sao Paulo and Genoa.

Which kind of architectural liaison are you establishing at Hangar Bicocca’s Shed?
For me was important to re-install and re-compose the presence of a figure who is now deeply-rooted to the urban context. Albini lived here in Milano and he also taught here. I keep on thinking that this is what I had in my mind when I conceived those pieces. I showed some of them in London. It was planned to exhibit part of them in White Chapel last year, but it seemed too complex installing some structures. Anyway I always had the necessity to work within entangled environments that I can refer to a specific cultural, historical and geographical context. This is the way I work, because I want to sensitise the spectator’s origins and to fine-tune my methodologies with local publics. I believe that an audience from Milan is much more familiar with those kind of architectural and design languages. In a space like the Shed, which is a post-industrial terrain, and a former factory, it is possible to revise the nails they used, as well as beams and columns. Because most of the building’s operative processes were manual and workers did not have today’s technological tools. For me it was important to transform these available squared meters in a more domestic space. So I introduced specific sculpturelike elements, especially the lamps designed by Albini and Helg. I displaced furniture-analogies as if they were stretching into the space, working within its limits, from the ceiling to the floor. I decided to open also the skylights, in order to turn the Shed into a more welcoming, a more familiar dimension, during the day. And even if the city is not apparently visible, the connection with the Shed’s surroundings, from outside to inside, could be always advocated.

Read also: Leonor Antunes. The frisson of the togetherness

How horizontal and vertical planes, in The last days in Galliate’s concept, intertwine each other?
In order to unify the Shed, I decided to conceive a floor. The whole corpus of works, from Modified double impression (2018) to Random intersections #20 (2018), installed simultaneously, could give the idea of representing fragments scattered from several different shows. As if they were part of various composing systems. But the yellow, geometric, segmented liner on the ground represents a connective support, needful to let artworks survive in this enormous room. Thus Discrepancies with F.H series and Enlarged rods (2018) are now readable as non-isolated proofs of my research. Becoming a kind of single and unique object.