The performance/concert Lavascar opened the “Fog” festival at the Milan Triennale with a magic ritual. Its stars tell us how it started. 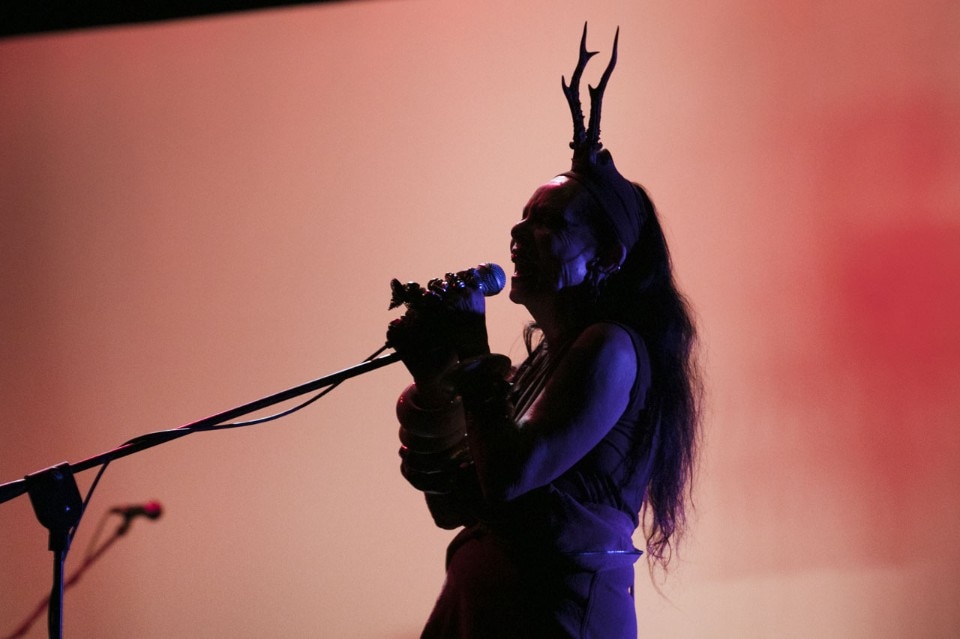 Lavascar is a project by Nico Vascellari, Michèle Lamy and Scarlett Rouge. It opened the “Fog” festival, which is packed with events and runs at the Milan Triennale until the end of June. Lavascar was presented on the stage of the Teatro dell’Arte. It was produced in collaboration with Rocco Rampino and inspired by Montage of a Dream Deferred by Langston Hughes, Michèle Lamy’s favourite poet. Three identities have been fused into a unique name, sparking off a ritual comprised of voices, sounds, bodies in movement, darkness and light. Accompanied by shadows and projections – like something out of Plato’s cave – the concert/performance of Lavascar seemed to recall words by Friedrich Nietzsche: “God’s play, child’s play, artists’ play.” The mantra “The Day People Laugh and the Night People Cry” resounded across the stage. After the concert, Michèle Lamy and Nico Vascellari told us about their experience of the project and how they met.

Michèle Lamy: Nico – who was not on my radar – asked me through a friend to take part in an installation-performance he was doing at the Palais de Tokyo. After a boat ride around Venice’s canals, I said yes, of course. I was so impressed by his performance and by discovering more about him. He made me listen to his Ninos Du Brasil. I picked him on the spot to collaborate on the vinyl I’d been asked to do by Red Bull. I cancelled some other plans I had for it, and we got in the studio with Rocco Rampino, his producer, and I brought Scarlett, my daughter. In five days we had an album and a band! I usually – this is going back many years – “sing” Langston Hughes poems. “The Day People Laugh and the Night People Cry” – it’s magic and mystery. Stuff happens sometimes! Viva Lavascar!

Nico Vascellari: Michèle and I first met during a long boat ride in Venice. I’d invited her to perform within my exhibition at the Palais De Tokyo entitled Scholomance. She said yes. I was extremely flattered and grateful for the way she dealt with my invitation – and astonished by the power of her presence in the exhibition. It was pure magic. She then invited me to record an album together. Now it was my turn to say yes. The pure magic arrived on time again when we entered the studio with Scarlett Rouge and my friend and incredible producer Rocco Rampino. Our album A Dream Deferred was recorded in the space of a single week. But most of all the session gently pushed us towards continuing the project. Lavascar was born under the rise of a mystical, primitive moon.
Postscript: That day in Venice after saying goodbye to Michèle, I felt an enormous sense of happiness – or luck I should say. For fun, I took a detour on the way back to my studio and went to the casino – to put money on number 33 at the first roulette table I came across. It’s hard to believe, but I won! Pure magic.
Post-postscript: I told Michèle about the number 33 when we met in Venice again. We took a boat and went to the casino together. We both lost but it still felt like luck.