The restoration of the building is part of a larger project entrusted to Architecture Discipline, commissioned by the Royal Family of Jodhpur and Motherland Joint Ventures. 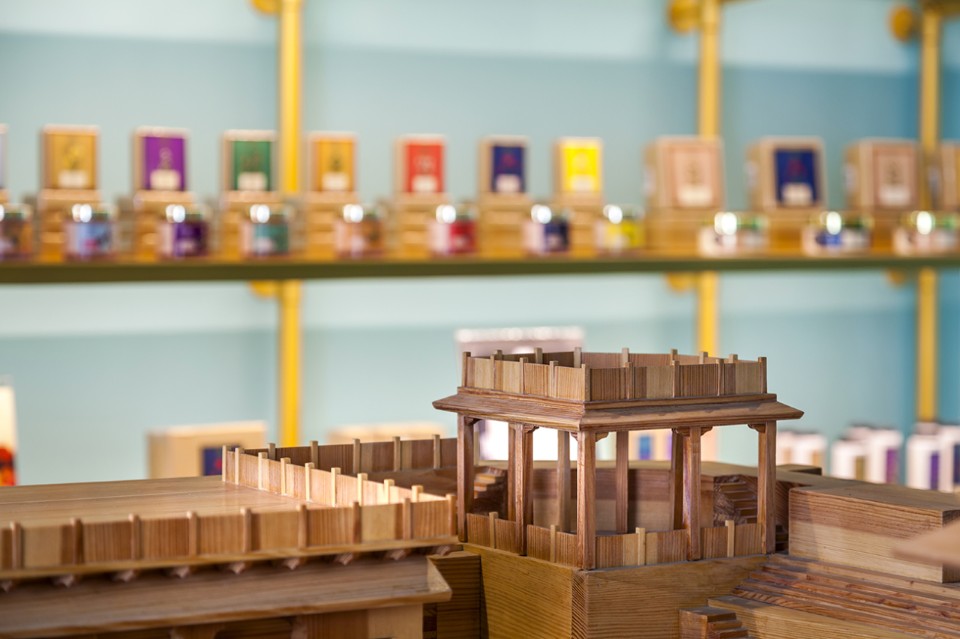 Realized by Architecture Discipline, a multidisciplinary architecture firm based in New Delhi, India, the JDH Urban Regeneration project, commissioned by the Royal Family of Jodhpur and Motherland Joint Ventures, aims to restore the old walled city of Jodhpur to its former glory, giving new life to its landmarks and livelihoods. The aim of the project was to identify key pathological elements and use them as catalysts for the regeneration process. The first project of this initiative was the restoration of a stepwell dating back to the 9th century, after which other key points were identified and restored, rehabilitated and assigned to the functions of representation of contemporary India. Moving towards the well square in the old town of Jodhpur we come across the building, originally a small and congested residential space, which has been transformed into a shop by Forest Essentials, an Ayurvedic cosmetics chain.

The brass and velvet furniture

Night view from the square

The brass and velvet furniture

Night view from the square

With the intention of not damaging the existing mass, the traditional arched openings have been strategically downsized, and supported by the introduction of a new opening to give a sense of balance and proportion to the elevation. The north façade is covered in COR-TEN steel, which recalls the colour and structure of the region’s red sandstone. The metal was chosen for its ability to change appearance over time, allowing the building to respond to changing climatic and environmental conditions. A Brazilian flame creeper on the façade adds a contrast to the metal cladding.

The interior is inspired by Art Deco, exaggerating colour schemes and proportions. A pastel green colour, part of the brand’s catalogue, has been chosen for the walls, with details of the furnishings in golden brass, velvet and suede that recall both Art Deco and the traditional interior finishes of Jodhpur. In the center of the store stands a wooden model of the area of the overall restoration project of the historic center. The floor, made of hand-cut and wax polished linoleum, is an adaptation of an old floor model inspired by mosaic with the introduction of brass accents that divide the floor into modules. The spectacular golden spiral staircase invites you to go up to the upper floor of the store. Even the custom-made technical brass rails have a retro and vintage look. The branding and signage on the shop windows is based on the ancient vernacular gold painting techniques of the walled city of Jodhpur. The commercial space is the result of an adaptation of Art Deco and a critical analysis of opulent regional elements, which tell of Jodhpur’s rich building heritage.