A concrete Trunk in Pforzheim

The office building built at the northern edge of the Black Forest has the name and solid appearance of a trunk, and just like a tree stands alone, next to an important urban hub. 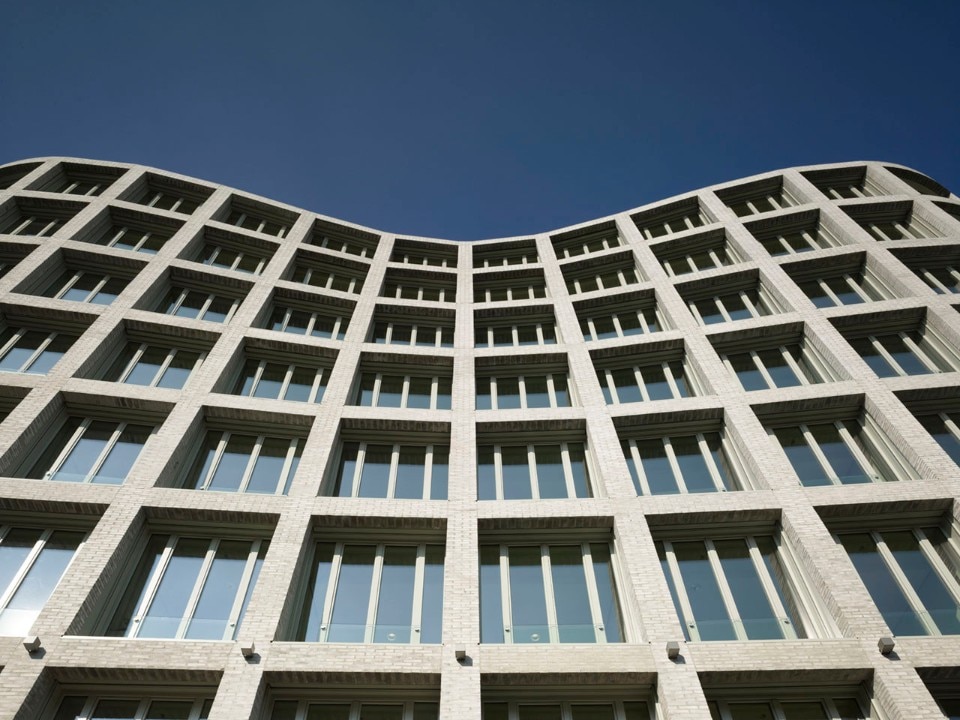 The building built in the area of the railway station of Pforzheim, in Baden-Württemberg, between Karlsruhe and Stuttgart, at the northern limit of the Black Forest, the trunk has the name and strong rooting that - at the Schulberg - is expressed through a massive red stone hoof that suggests a sense of solidity. Moreover, of the sturdy stem of a tree, Il Tronco has the characteristic of being isolated, at the top of a relief, at an important urban junction, and has a curvilinear form molded plastically without respecting the perpendicularity of the facades, exactly as it could happen in the case of the supporting structure of a plant.

The sinuous facade takes on a different conformation from all angles. Surface-treated grey brickwork amplifies the monolithic stone base, while the frame of reinforced concrete bends inward as the building rises.

Night view of the building.

The building’s base relates to the traditional red sandstone house in the foreground, then curves and flexes in the upper part.

The Trunk is positioned at the top of a hill near the Pforzheim train station.

The Trunk is positioned at the top of a hill near the Pforzheim train station.

Ground floor plan. The interior design was also developed for this floor

5th floor plan. The interior design was also developed for this floor

6th floor plan. The interior design was also developed for this floor

What instead of the trunk does not have is wood as its main material. Unlike many other buildings designed by Michele De Lucchi, it has a reinforced concrete structure covered with light bricks. And it is devoid of the irregularity and spontaneity of nature. It is true that the building (which houses the administrative offices of the economics and marketing divisions of Pforzheim) inclines its facades inwards as if it were a natural, organic element; but, in a very surprising way, De Lucchi combines this plastic treatment of the fronts with the adoption of a rigid grid of windows that envelops the building in its entirety, giving it a sober and rigorous look.

In his book dedicated to employees published in 1930 (Die Angestellten), Siegfried Kracauer emphasized the uniformity of a multiplicity of phenomena in the world that revolves around the offices as a typical manifestation of modernity: languages, clothes, gestures, but also the same buildings in which the offices are located, then appeared in his eyes (as still often to our) strongly standardized and always equal to themselves. Given this condition, De Lucchi's decision to equip his building with a rational, orderly composition does not in any way imply an adaptation to general uniformity: on the contrary, Il Tronco stands as a criticism of the tired repetitiveness of the building. office architecture. But at the same time it is kept away from the empty contemporary formalisms, from the superficial will to amaze. In this sense, the soft bending of its fronts, the progressive inflection of their highest part, are all the more enhanced the more these design choices are reacted with the constant rhythm and the severe appearance of the openings.

The internal distribution of the building benefits from the same curvature, making the corridor a continuous common space, where the 'squares' of the stairs and the conference and meeting rooms open up.
A building that constitutes a steady urban landmark, austere but at the same time able to stand out - just as good architecture should be.