Burle Marx, Costa, Niemeyer: the masters of architecture in the megalopolis-necropolis

In 1975, Domus 544 publishes an essay by Massimo Gennari, who retraces the urban history of Rio de Janeiro and points the finger at a high-quality architecture of dubious political value. 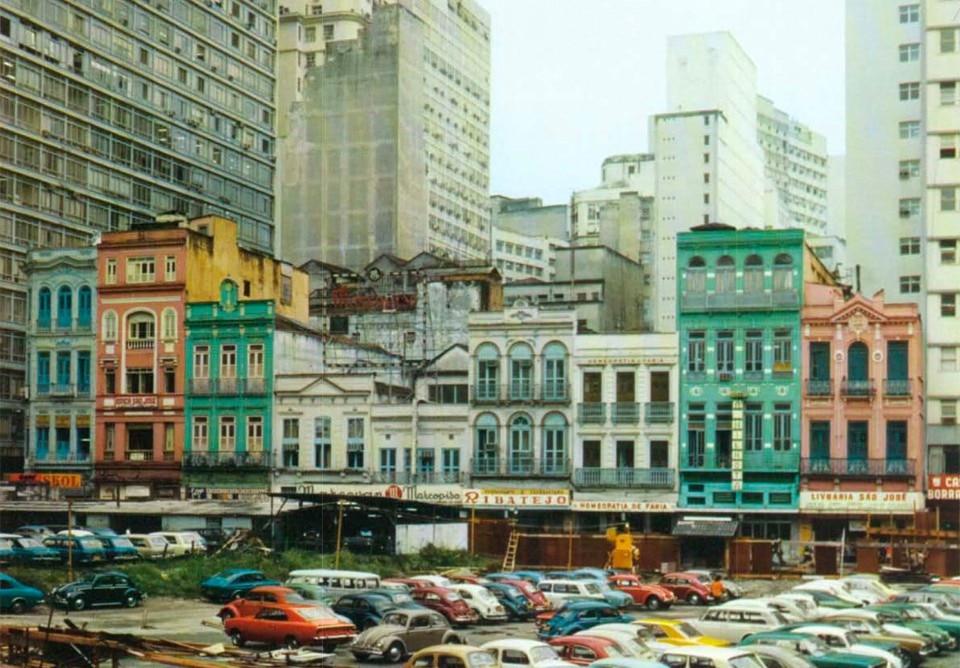 In March 1975, the cover of Domus 544 is entirely filled by the colorful, meandering drawing of an urban plan for Rio de Janeiro by Lucio Costa. The article that it refers to, though, is far from the “usual” description of the conceptual, formal and structural stunts of Brazilian modernism. The Great Rio. Megalopolis or Necropolis? is the chatcy headline of a passionate, polemic reconstruction of the city’s urban history, from its foundation to the 1970s.

While Brazil is surviving through the toughest years of its military dictatorship, Massimo Gennari singles out Rio as a case-study. Through this example, Gennari narrates the construction of a capitalist-oriented city, its relentless adaptation and its unescapable submission to the diktat of profitability. Not by chance, since the article’s very first lines, he clearly states that Rio’s criticalities could soon be replicated by large European and North-American metropolis.

Concerning present time Rio, Gennari declares, through his accurate and dense prose, that “the example of urban models theorized and realized here, due also to the weakness of opposition structures, anticipates the restructuring of space in cities which, in turn, are the offspring of the neo-capitalist society’s contradictions and tensions”.

Before focusing on the contemporary age, though, Gennari applies his specific perspective to centuries of urban transformations. About the city’s Haussmann-inspired renovation at the end of the 19th century, he explains that “the avenidas of 40 meters (…), the spectacular roundabouts, the architectural revivals of representative buildings, in reality, defined the new social equilibrium, founded on real estate and commercial speculation and economic concentration, which were primary agents in the traditional process of outcasting and expulsion of the subordinate classes, which to this day characterizes the face of modern Brazil”.

To comment on the urbanization of the shorelines of Leme, Sacopacapà, Ipanema and Leblon, he cites Imperialism and dependent urban development in Latin America by sociologist Manuel Castells, published in Italy in 1972. In the wake of Castells’s mindset, Rio’s early suburbs are to be interpreted “in the classic sense of the word, as ‘segregated communities, separated from the city not only by space but by a class stratification’”.

The message of Modernism, imbued with its renewing, egalitarian ethics, finds no fertile ground in the city: “It is easy to understand what influence the lectures delivered by Le Corbusier must have had upon the more sensitive intellectual minority during his first trip in 1929 and what a psychologically traumatic consequence the fascinating urban utopias (of Rio and Saõ Paulo) (…) must have caused. But it is equally easy to understand what kind of political difficulties prevented and would have prevented the acceptance of the new reality indicated by the rationalist postulates, from being translated into a ‘subversive’ revision of the traditional organization of social space”.

Generally speaking, all planning attempts in the first half of the 20th century are doomed to failure, with a notable, negative exception: “The roads communication policy found support as long as the works recommended and carried out led to new and appetizing business deals”. As highways proliferate, particularly starting from the 1940s “the existence of increasingly wide social formations became ‘institutionalized’ and isolated in the marginal enclaves of the hinterland or hill-country, housed in drab tuguri which the craze for the picturesque has made sadly famous”. That is to say: favelas had come into being.

In Gennari’s Rio, all the mighty are guilty, including the mightiest amongst architects. Building imagined or realized by Roberto Burle Marx, Lucio Costa, Oscar Niemeyer, Affonso Reddy, just to mention a few names, stand out from the images accompanying the article. With few exceptions, and some whispered caveats, they are all condemned, not for the architectural quality, but because of the political value of their work.

According to Gennari “the new architecture is imposing itself with qualified objects, the cultural expression of the excitements and tensions of an intellectual minority, who are aware of their ideological rôle in support of the bourgeois strategies in the formation of urban space. Museums, public buildings, hotels, private hospitals, residences and gardens discreetly punctuate its structural order and bestow on it a formal dignity in keeping with the representative ideals of the ruling classes”.

In the meantime, the city has expanded to the scale of a megalopolis, but the consciousness of its new scale hasn’t resulted in a revision of the principles underlying its construction. On the contrary, “in the name of Greater Rio, the aspirations to ‘grandeur’ of a bourgeoisie are intermingled with and consolidated by the growing concentration of profits and of a bureaucratic system increasingly framed within the oligarchic power structure (…). The megalopolis myth authorizes the coolest of solutions”.

Even in the megalopolis, the masters of architecture are powerless, to say the least. This is witnessed precisely by Costa’s project who made it to Domus’s cover, which is the pilot plan for the development of the Baixada di Jacaperaguá and for the new metropolitan center of Greater Rio (1969): “With no political or different administrative support, it risks being turned into a refined instrument of space production and management, which is violently segregating and prevaricating”.

Between the lines of Gennari’s copious writing, an atypical image of carioca architecture surfaces, grim and burdened, rather than joyfully snow-white and curvy. On the opening page, the miserable glimpse of a slum is paired with the drawing for a neighborhood of towers by Niemeyer, also part of Costa’s plan. Gennari’s remark is unequivocal: “The eighty tower buildings along the Avenida das Americas (…), as the archetypal symbols of a socially backward spatial reality, seem to look ahead in their rigid sequence, to the icy and fatal shadow of the Necropolis”. This is a clear warning to Western urbanism, as well as an invitation to critically observe architecture beyond its formal qualities.