In the 1930s Frank Lloyd Wright designs a private house in Pennsylvania, which is a demonstration of the principles and potentials of organic architecture. 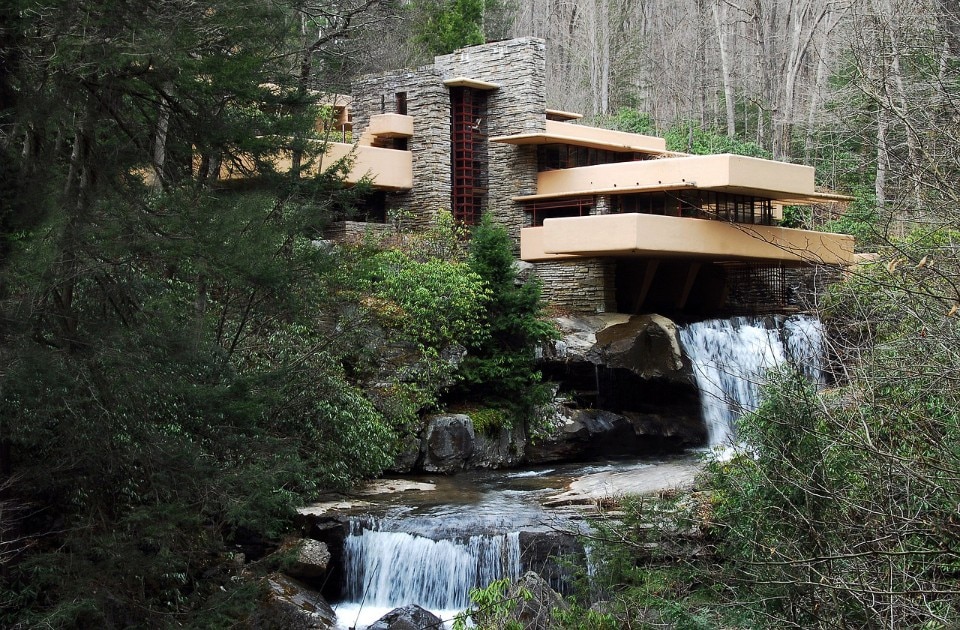 The private house has been one of the most fertile fields of experimentation for 20th century architecture. Two buildings of this typology can better embody the two main currents that the experience of the Modern Movement is usually divided into. Le Corbusier’s Villa Savoye (Poissy, France, 1928-1931) is a remarkable outcome of the rationalist approach. The organic stance of modern architecture, on the other hand, identifies itself with Frank Lloyd Wright's Kaufmann House.

Following a common pattern, the success of the project is largely due to the combination of a cultivated, wealthy client and an architect who could give shape to his requests effectively. In this case Wright got the commission from Edgar J. Kaufmann, the owner of one of Pittsburgh’s largest department stores of the time. In 1935 Kaufmann summoned him to design the weekend house for his family, to be realized in his own large estate in Mill Run, on the mountains of southwestern Pennsylvania.

Read also: In 2017, a major exhibition at the Museum of Modern Art critically engages the multifaceted practice of Frank Lloyd Wright, one of the most prolific and renowned architects of the 20th century.

The Kaufmann house is unique first of all for the place where it stands. In fact, the architecture literally overlaps with a little waterfall along the course of the Bear Run stream, a specificity that resulted in its designation as Fallingwater. The choice of this atypical site, cherished by the client himself, was an opportunity for Wright to compose a valuable sample of organic architecture, a concept that is here brought to its extreme.

The building is comprised of a composition of vertical walls of local stones and of fair-faced concrete terraces, laid out on the stream’s banks and mutually staggered. Several elements contribute in stressing the continuity between the natural site and architecture: the open plan of all floors; the use of the same stone flooring both for the interiors and open air; the site’s stones that surface in the living room, in particular around the fireplace; the entirely glazed façades, where windows frames are painted in the typical Cherokee red shade. The oversized projections above the water, whose perception is reinforced by the reduced ceiling heights, are to be intended as a demonstration, a statement of the will to define a full interpenetration between nature and artifice.

While it is on many regards a one-of-a-kind episode, the Kaufmann House also continues Wright’s decades-long reflection of the American house, framed in his wider research on a truly American architecture. Therefore, the solutions adopted here in terms of volumes, language and materials resonate with similar experimentations made on the early 20th century “prairie houses”, as well as on the so-called “usonian houses”, that were being perfected precisely in the late 1930s.

The Kaufmann House is completed in 1939, the same year as the publication of the seminal volume An Organic Architecture. The Architecture of Democracy. This text, based on four lectures given by Wright in London during the previous months, is one of the most extensive and thorough presentations of the organic approach to architecture. Both the house and the book were key in revitalizing Wright’s popularity, at a time when he was already more than 70 years old.

The Kaufmann House is also an example of a particularly well preserved modern architecture, still featuring most of its original details – as opposed, for instance, to Villa Savoye. In 1963 the Kaufmann donated it to the Western Pennsylvania Conservancy, alongside the most part of the furniture and the works of art that they had accumulated over the years. Since then the Kaufmann House is a museum, its constant use granting its regular maintenance. A major intervention of conservative restoration in the 1990s intervened on the main concrete elements, that were post-stressed in order to increase their resistance.

To conclude, few architectures from the 20th century can equal the Kaufmann House’s fame and the quantity of awards that it has received to this day. The house rapidly became part of a collective imagery, as an icon of daring modernity. Already in 1937, before the building’s completion, Wright appeared on one of Time’s cover, with a drawing of the Kaufmann House as his background. Also famous is the episode of Alfred Hitchcock’s North by Northwest (1959). When he was refused permission to shoot inside the actual house, Hitchcock decided to reconstruct a revised version of it in the Metro-Goldwyn-Mayer studios. In 1991 the Kaufmann House has been awarded by the A.I.A. – American Institute of Architects, as the best all-time work of American architecture. Since 2019 it is also part of the Unesco’s World Heritage list, together with seven more buildings by Wright.