“The human figure appeared to me, about 1893 or earlier, as the true human scale of architecture” (Frank Lloyd Wright, 1957) 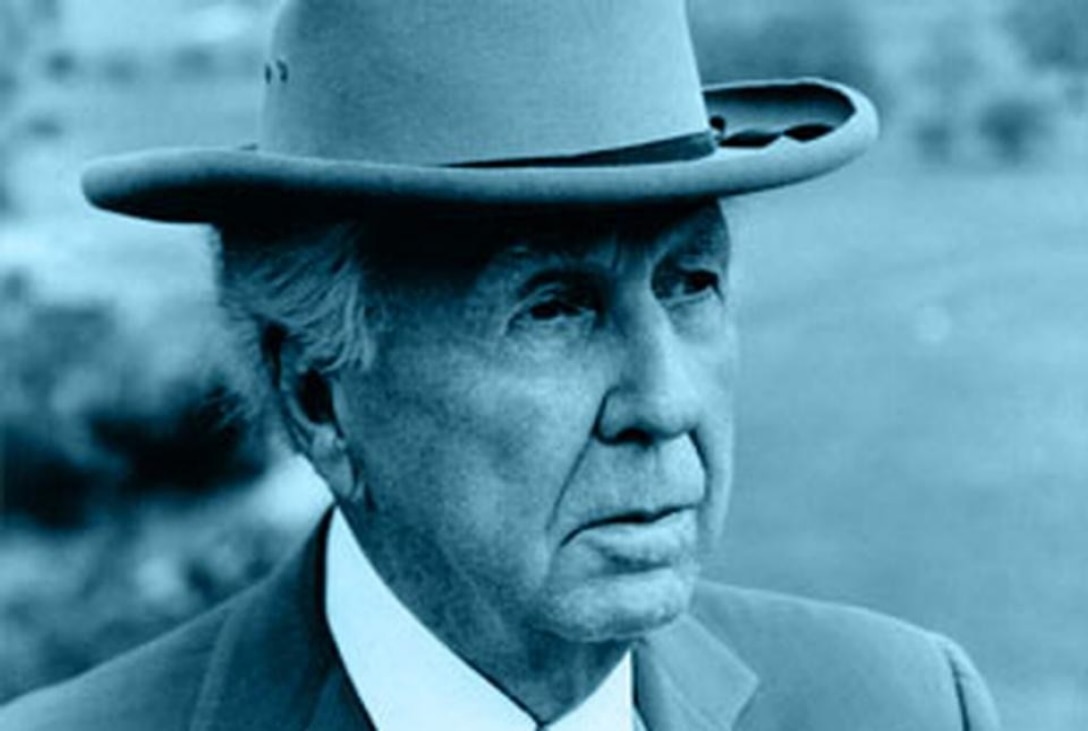 Frank Lloyd Wright (1867-1959), the oldest of the five masters of the Modernist Movement (the others are Le Corbusier, Mies van der Rohe, Alvar Aalto and Walter Gropius), was born in 1867 to a family of Unitarian preachers of Welsh origin.

He was educated by his mother according to the pedagogical principles of Friedrich Fröbel (as was the case, among others, for Charles Eames, Richard Buckminster Fuller and Johannes Itten), in which an important role was assigned to Spielgabe (translated as “play gifts”): spheres, cubes, cylinders and other standard solid shapes, made in a range of materials (from yarn to wood), which can be manipulated and assembled in infinite variations and which – according to a number of critics – had an influence on his figurative imagination.

Having enrolled as an external student for the courses run by the Engineering department of Winsconsin (which he later dropped out of), he began his professional career as an apprentice in two important firms: the first, belonging to J.L. Silsbee, and then at the Chicago office of Dankmar Adler and Louis Henry Sullivan. He remained there for approximately six years, from 1887 to 1893, concentrating mainly on the designing of single family homes, but in any case had an opportunity to see the designs for skyscrapers (a type of building that Wright was to detest for his entire career) and commercial buildings which Adler and Sullivan were developing in the heart of the Chicago School and, more in general, designs regarding the emerging trend of organic architecture (of which Wright was to become the undisputed protagonist).

In 1893 he opened his own studio in the Schiller Theatre Building (one of the most famous of Adler and Sullivan’s works), from where he once again worked on suburban houses.

His negative views on the World Exhibition Fair of 1893 – which he described as “appearing to me more than ever tragic travesty: the florid countenance of theoretical Beaux-Arts formalisms; perversions of what modern building we then had achieved; the mortification of our progress. A senseless reversion” (1957) – led him to begin to reflect on the true spirit of autochthonous American architecture, to be built on the legacy of the pioneers.

Assuming as his fundamental values moral principles such as family unity and ties to local traditions, he developed the first examples of the so-called “Prairie houses”: a heterogeneous group of habitats surrounding the Oak Park district which however shared (both amongst themselves and with the first examples of organic architecture) characteristics such as a strong attachment to the terrain, the composition of the plan, elevation and section through a modular and proportional system based on the human figure, a mainly horizontal layout (which Wright defined as “slimness”) and a form of contamination between internal and external space, which also played on the progressive destructuration of the outer frame which was made possible through the application of new materials.

The only exception that Wright made to the desolation of the World Exhibition Fair was the small pavilion built like a Ho-o-den, a small Japanese temple built on an artificial island (the Wooded Island), which the architect found very interesting. Having already developed a fascination for a number of prints and woodcuts from Japan, Wright further developed his interest for the country’s culture and architecture, which led him not only to take numerous trips to the Orient, but also to become one of the most important American experts and collectors of Japanese graphic art.

He lived for a few years in Tokyo, between 1915 and 1921, and wrote an essay often referred to by lovers of Japanese art entitled “The Japanese Print. An Interpretation” (1912). Naturally, the references to Japanese figuration and imagery are evident in many of Wright’s works, which reached a peak in the Tokyo Imperial Hotel (1915-1923) but which were already clearly notable in the Winslow House in River Forest (1893).

The transition from the “true” American home to the “true” settlement pattern was brief. The layout on which the Prairie houses were set out was extended into the territory, forming the network of Broadacre City (1932) which was seen by Wright as “a new space concept in social usage for individual and community building”.

On a square layout, with each plot an acre in size (hence the name broad-acre), he presented the construction of units (the so-called “unsonian” houses, a term which originated in the USA) which were not only detached, but also self-sufficient, as the size of the plot allowed for the creation of vegetable gardens which guaranteed the independence of the citizens from the distortions of the modern economy.

Along with considerations on the theme of housing, Wright also approached that of public buildings, with the Unity Temple – again in Oak Park (1905-1908), a cement monolith destined to host Unitarian meetings, as well as that of office buildings, with the Larkin Company Administration Building in Buffalo (1904, demolished in 1950), and later the S.C. Johnson Wax building in Racine (1939).

Having become very famous in Europe thanks to a solo exhibition in Berlin in 1910 (his works were published in the catalogue “Ausgeführte Baute und Entwürfe”, which was a best-seller), Wright in the meantime had begun to work on another type of house, known under the collective name of “textile block houses”: these were houses, this time concentrated in Southern California, which were made with a particular system of prefabrication which was patented by the architect and inspired by the way in which modern machines weave cloth.

A metal rod frame was used to hold self-supporting cement blocks which were slid onto it, often integrated with decorative cuts closed with coloured glass, and the blocks were then fixed with wet cement poured into the channels which housed the rods. “For the first time ever,” claimed Wright , “a building can be constructed in a light manner, all complete, using just one material which is literally woven to create a model or design, as is the case with oriental fabrics” (1927). A magnificent example is the construction known with the nickname of “La Miniatura” (Pasadena, 1923), built for the Millard family and used as the set for numerous cinema productions, as well as the setting for one of the most satirical episodes of the irreverent American cartoon, South Park.

After all, Wright is undoubtedly one of the first architects to have fascinated the general public, and thus was one of the few developers to have been honoured with a cover on “Life Magazine”. In 1970, the musical duo Simone & Garfunkel dedicated a song to him (“So long, Frank Lloyd Wright”), after his international success reached planetary levels with the last and extraordinary works in his long career: the famous “Falling Water” (built over a waterfall in Bear Run in Pennsylvania in 1936), and the equally famous Solomon R. Guggenheim Museum in New York (1945-1959).

Italian architect and urbanist Bruno Zevi said of Wright: “Authentic architecture, Wright teaches, of the future, but also of the present and the past, affects, moulds, invents  liveable human space, the space per se at the service of the individual and the community... However, if contemporary architecture truly aspires to re-integration, to a new humanism, it can find exceptional stimulus in the infinite world of Wright.”