Back to Crespi d’Adda, 25 years after its nomination as Unesco World Heritage site

The company town imagined by the Crespi family as a “città ideale” is today both an extraordinary industrial archaeology park and a peaceful suburban neighborhood. 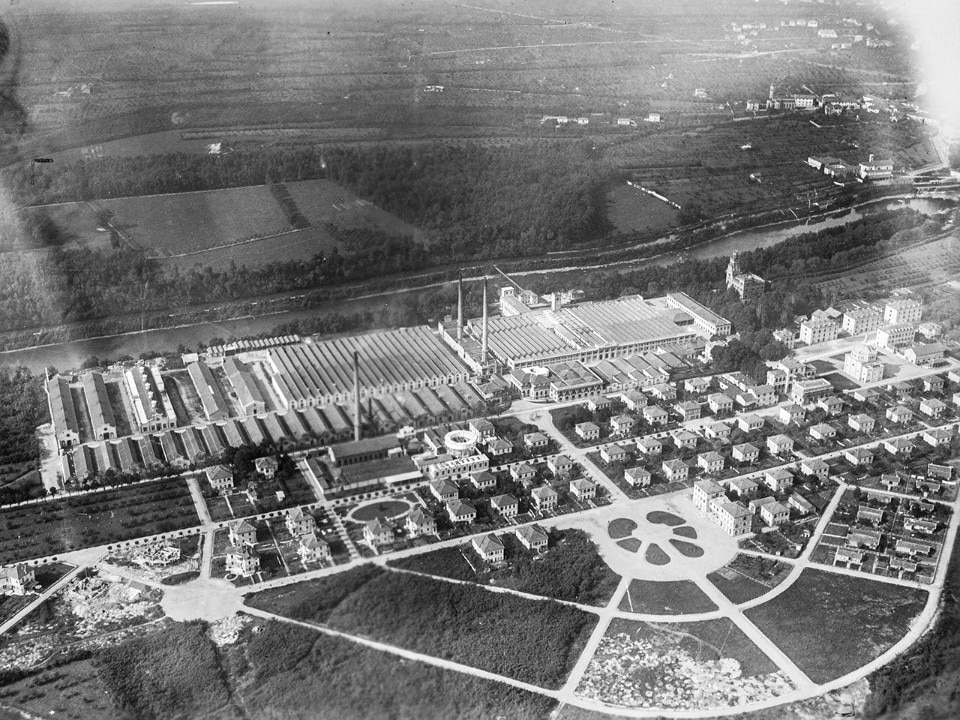 The Adda Valley cuts through the high plains of Lombardy as an unexpected verdant hiatus. From the A4 highway or from the Milan-Venice railway, its appears for just a few seconds as a thick forest, steeply sloping down to the river, which is here particularly meandering. It is a passing view, sandwiched between the most monotonous Padania Classics landscapes, as defined by Filippo Minelli's photographic research, that is a haphazard accumulation of warehouses and homes, farms and international airports, with no discernible order or hierarchy. The creation of the Parco dell’Adda Nord, in 1983, certainly limited a further expansion of the urban sprawl towards the river.

Leonardo da Vinci considered this section of the valley as the most suitable background for its Virgin of the Rocks, “set” in the vicinities of local village Imbersago. Also, and more importantly, when Lombardy became resolutely industrial between the 19th and the early 20th century, this territory provided useful resources for the functioning of the productive machine. Today, the ancient hydroelectric power plants in Calusco and Porto di Cornate, alongside the famous Taccani power plant in Trezzo sull’Adda (Gaetano Moretti, 1906), interact with such heroic infrastructures as the two-storey, entirely metal San Michele bridge (Jules Röthlisberger, 1889), constituting one of the richest and most diverse industrial archeology ensembles of Northern Italy.

Its most valuable element is the company town of Crespi d’Adda, built starting from the 1870s by Cristoforo Benigno and Silvio Benigno Crespi. In 2021, a series of events will celebrate the 25th anniversary since its inclusion in the Unesco’s World Heritage List, with a now standard pandemic-related one-year delay. It was the year 1995, and for the first time the selection of Italian sites included not just more ancient and celebrated cities such as Siena, Ferrara and Naples, but also an industrial complex, relatively unknown by the general audience, and still functioning at the time – activities in the factory will be discontinued eight years later.

The nomination of Crespi d’Adda was the unexpected personal success of few enthusiasts who worked on the application dossier, in the first place the university students belonging to the “Centro Sociale Fratelli Marx”. At the same time, for Unesco this was a consistent choice in a trajectory of progressive diversification of the typologies of heritage protected by the association. In fact, in the mid-1990s, a broad interpretation of the notion was widely accepted. This also encompassed 19th and early 20th century architecture, previously overlooked even by preservation specialists, and typologies which were distant from traditional monuments. Besides its own qualities, Crespi d’Adda was also the right proposition at the right moment.

The Crespi were originally from Busto Arsizio, a province town that in 1870 was almost ready to turn into the so-called “Italian Manchester”, an urban turmoil of factories and chimneys. On the banks of the Adda, they built an alternative to this condition, a città ideale clearly inspired from northern European models, entirely planned and with the cotton mill as its functional and symbolic core. Crespi d’Adda represented the three dimensional translation of a socio-economic model that glorified the public role of the tycoon, on the threshold between philanthropy and paternalism, corporate welfare and social control. The marvels and contradictions of the age of the Industrial Revolution.

The utopia of Crespi d’Adda envisaged that the life circle of each and every factory’s employee would take place entirely in the village. The latter was the place where workers from the countryside would be welcomed and trained to a modern way of life. Therefore, besides the Crespi manor house, the independent houses for white-collars and the semi-detached houses for blue-collars, in Crespi d’Adda one would find a kindergarten and a school, a theatre and a community center, a sports field and a hospital. Oddly enough, the local church of the Most Holy Name of the Blessed Virgin Mary was a downscaled reproduction of Busto Arsizio Shrine to the Virgin Mary, like a pocket-size tribute to the Crespi’s native town. To conclude, the graveyard, a remarkable work by Gaetano Moretti embedded with symbolic and exoteric references, was realized under pressure from the Crespi as an exception to the regulations on the territorial distribution of cemeteries. Those who lived in Crespi d’Adda, would die and be buried in Crespi d’Adda.

Read also: A petition to save 10 relict tanks has failed in favour of a public park on Brooklyn’s waterfront. A controversial episode of the debate on the preservation and the transformation of industrial heritage.

Similar visions to the one animating the Crespi can still be retraced in the built fabric of several mid-size and large industrial Italian towns, punctuated by the residences and services that were once reserved to the workers of various factories. Crespi d'Adda, though, is outstanding because it is a new city, where fragments are framed within a single, readable plan, freed from the disturbance that defuse it elsewhere. This completeness, and the absence of any perceptible stratifications makes it an exact, didactic legacy of a specific moment in the architectural, urban, social and economic history of norther Italy.

Summer may be the best season to visit Crespi d’Adda, not just in order to ster clear of the roughness of Lombardy winters, but more relevantly because during the warmest months the surrounding woods would densify. An impasse at the confluence of the Adda and Brembo rivers, enclosed by the compact canopies of broad-leaved trees, Crespi d’Adda stands in a cocooned isolation and, much like the rest of the valley, it seems to ignore the rush flowing all around. The brick chimney is the monument to its industrial past. The houses are the spaces of continuity, a stage for everyday life for a century and a half, with no interruption. The Unesco Visitor Center, first opened to the public in 2017, is the promise of a future based on a culturally aware tourism, which we hope will contribute to its preservation and promotion in the long term.