An exhibition on Peter Lindbergh’s photography curated by himself

In Turin, Italy, “Untold stories” is an introspective exhibition on the photographer’s work, a cornucopia of black and white photos selected by Peter Lindbergh before his death in 2019. 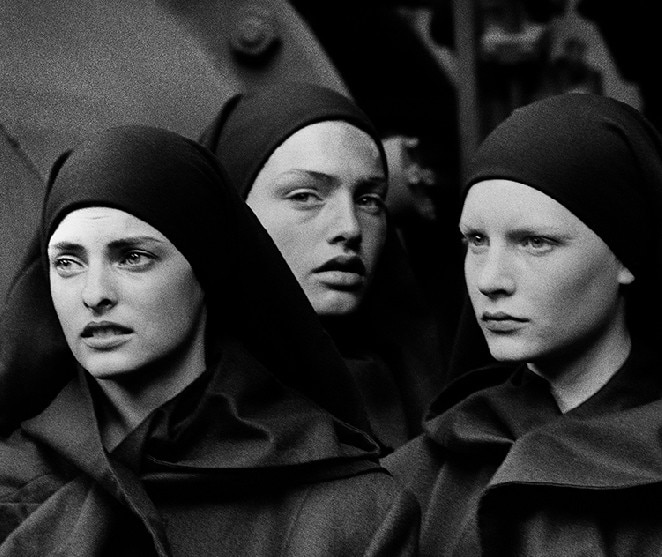 Known to many as the fashion photographer who shot in black and white, Peter Lindbergh was much more than that. In the 1990s, the era of the supermodels and glossy Vogue covers, he was the first to express the necessity of promoting healthy standards of beauty, eschewing photo-retouching and preferring natural shots. What is striking about his photography is the naturalness and depth of the gazes that evoke the true essence of those in front of his camera lens. But not just  that: Lindbergh was able to capture the soul of the very locations of his photographs, often the “rougher” sides of cities - in stark contrast to the natural delicacy of his subjects.

The exhibition is divided into three sections. Manifest, the first one, is an introduction to Lindbergh’s fashion photography. In the second section Lindbergh chose and organised images that he considered personally fundamental to his work. He experimented with his own archive and revealed unreleased stories while remaining true to his language. Emblematic photographs along with others never seen before are displayed in pairs or groups, resulting in unexpected and evocative interpretations. The exhibition closes with the video installation Testament (2014), the story of a convict sentenced to death, a story captured in 35 introspective minutes.

Because Lindbergh was also this: a photojournalist, who, following the footsteps of another famous black and white photographer, Henri Cartier-Bresson, wanted to claim the freedom to be, without limits, oneself.

Read also: Are private commissions the future of authorial photography?