An artist, an architect and a designer, two Italians and one English, this is the meaning of the title of the exhibition in the non-profit space Assab One. 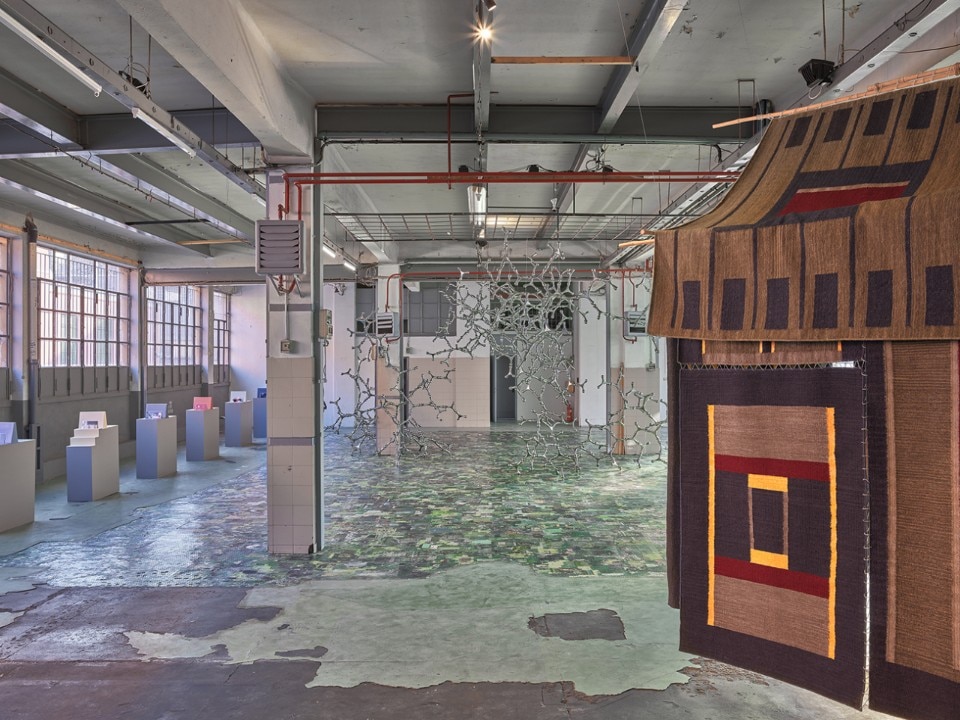 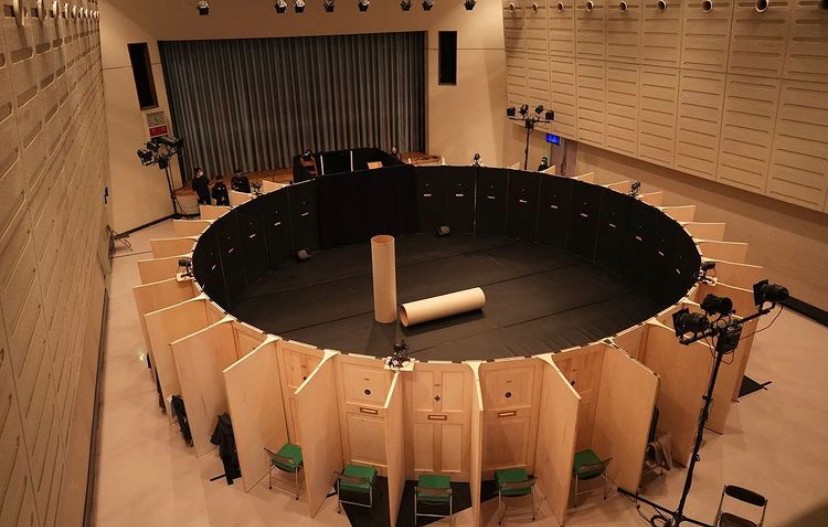 1+1+1, the project that puts together an artist with a designer and an architect says a lot about the attitude of Elena Quarestani, owner of the Assab One buildings in Milan and founder of the homonymous non-profit space. An interdisciplinary vision that has taken shape in recent years with increasing clarity. The current one is the fourth edition of this project that takes place once a year, while the exhibition program continues alternating contemporary artists, photographers, architects and designers, events.
And this one of 2020 is, at least so far, the most successful, perhaps also because it is a project conceived as a unitary and not as the juxtaposition of three different exhibitions. A subtle difference, since the space is very large and even here the works are actually distinct in space, yet the collaboration is perceived in the final result.

Exhibition view, in the foreground the installation by Pentagram & friends.

Exhibition view, in the foreground a sculpture by Loris Cecchini

Exhibition view, in the foreground the "village" by AMDL Circle

Exhibition view, in the foreground the rug in the tones of brown by AMDL Circle
ph. Giovanni Hänninen

Exhibition view, in the foreground the sculpture by Loris Cecchini
ph. Giovanni Hänninen

Exhibition view, in the foreground one of the house/tent by AMDL Circle
ph. Giovanni Hänninen

Exhibition view, in the foreground detail of the sculpture by Loris Cecchini
ph. Giovanni Hänninen

Not only that, but Loris Cecchini Arborescense in 2 suites installation, composed of two different works, Aeroponicseeds XL and Waterbones, seems to be born from a permanent work on the floor by Andrea Mastrovito, a legacy of the previous edition of 1+1+1. And this is precisely the idea behind these sculptures by Cecchini, which expand like rhizomes, metallic and hard, becoming seductive and soft in their mimicking natural elements, in potential perpetual expansion. Here they seem to lean toward the other’s works.
The natural light that illuminates the installation by Pentagram & friends enhances the grace of Home Poems, a project born during the lockdown, produced by Naresh Ramchandani (partner and writer of the graphics and communication studio, among the most long-lived and famous in the world), is the result of the work of twenty people and was made in London, one of the five locations of the studio. Starting from the poems of Henry Ponder, English twitter poet who writes urban haiku, the studio has transformed his texts into video poems directed by Steven Qua, the participation of Oscar winner Kevin Macdonald, the music of Yuri Suzuki and Jean-Ga Becker and all those who participated in the project. A colorful look at the objects of everyday life with the precision of those who have an open vision of design. But also the luxury, which designers sometimes indulge in, of a job free of commissions.

From one to many, this is the case of hanging houses made of carpets that ogle from the short side of the space and then show themselves together like a small flying primordial village. Many Hands Make One is the installation of AMDL CIRCLE – the interdisciplinary circle of designers of which Michele De Lucchi is part and founder. It is a collection of limited edition kilims, handmade by Jaipur Rugs, an Indian company that makes use of artisan weavers, most of them women. The design born in Italy, the weaving in India, the object and architecture, the many hands and heads. A sort of collective circularity that, although inherent in the nature of the carpet object, here becomes programmatic: to do well, better to do it together.

Given the times we are living in, it seems a convincing idea.