For the first time in a UK public institution, the Swiss artist is celebrated by a significant body of her enigmatic latex works made during the last two decades of her life. 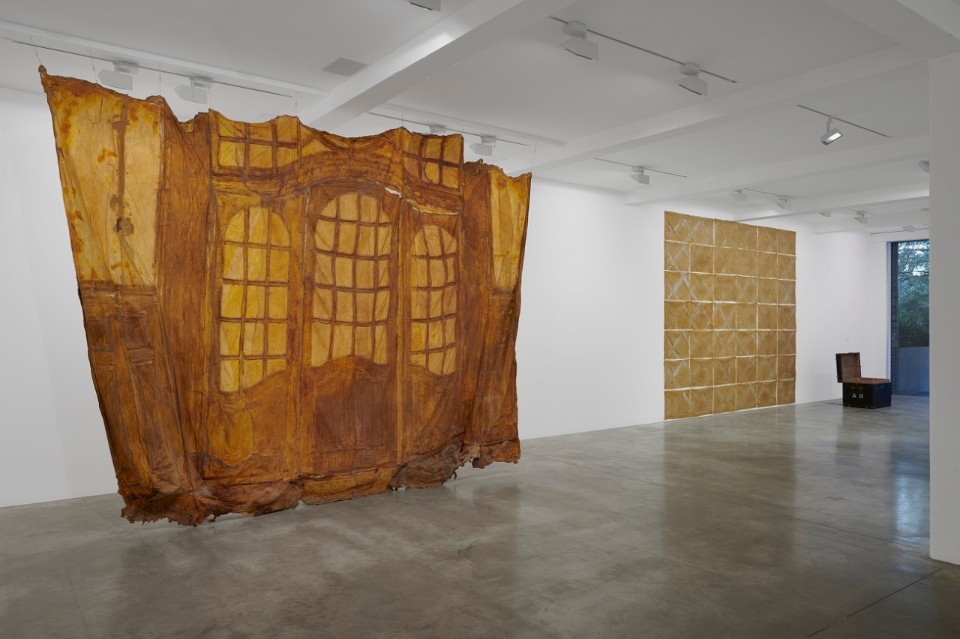 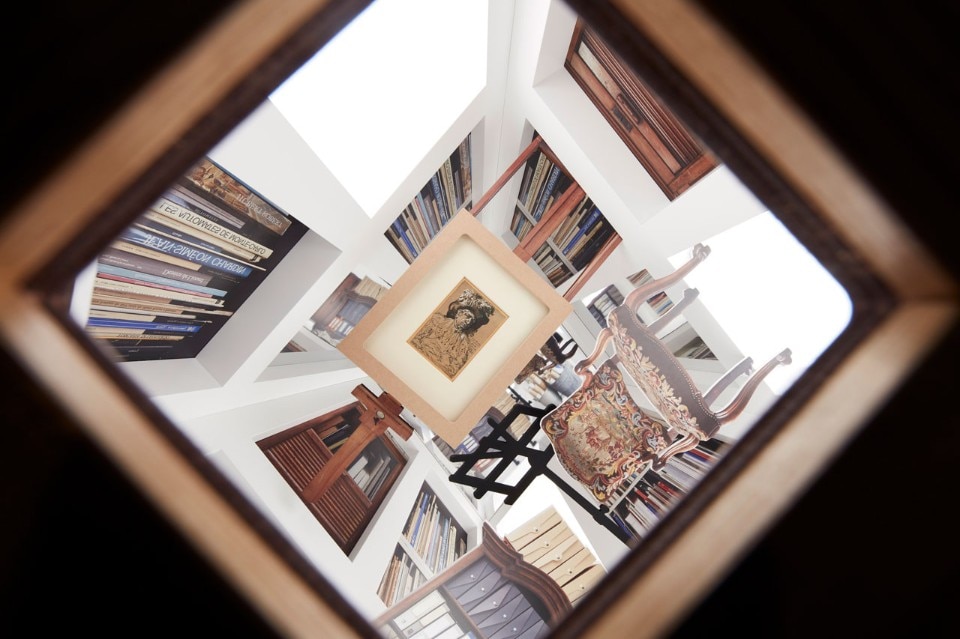 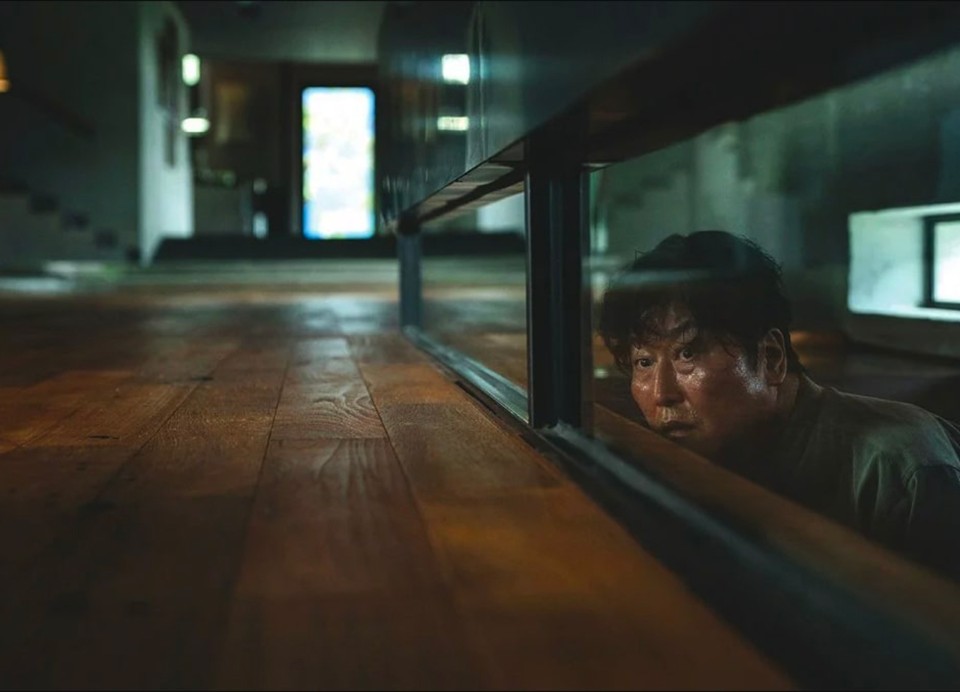 In London, the most extended survey exhibition of works by Heidi Bucher (1926 –1993) is actually hosted at Parasol unit foundation for contemporary art. Several, impalpable latex works made during the last two decades of her life are accompanied by screenings of films that document how the artist processed, practiced and moulded different components. As if we were crossing a temple, to conserve momentum, each region of the body, visiting her solo show, points a different direction. The feet stalk a parallel line to the wall, the torso aims somewhere between, leaving only the face to address the work.

Perhaps every third or fourth latex threshold on the wall, we briefly cease our approaching-walk and hunker down to really look. Her skinned casts of reality draws attention to the work of art as object and to the associated activity of an objective contemplation. Ornaments, clothing, interiors (Raumhäute, room skins) and the human body (Häutungen, skinnings), witness how Bucher’s process invariably preserved a haunting imprint of an architectural surface or an object which was simultaneously both a physical encapsulation of and a liberation from the memories.

At Parasol unit foundation, the exhibition reminds how the real source of the change in Bucher’s art was her time spent in Los Angeles (1970-1973), where she saw many Southern Californian artists using non-traditional materials to make their work. Starting a lifelong friendship with Ed Kienholz, Bucher also knew how new components and techniques were processed through De Wain Valentine, Craig Kauffman, Robert Irwin, Helen Pashgian and,  almost for sure, Robert Overby's oeuvre.

In Bucher’s work, the latex skin reminds us that certain things in our lives persist long after we are gone, that the shelter, whether it be home, shirt, apron, or bed, may ultimately be more permanent than its inhabitant. But her peculiar association, her intuition about a formal bond between flexible materials and sculpture occurred in 1967, when Bucher first gained attention in the United States for her sculpture-cum-clothing series, Landings to Wear (1967–1970), made in collaboration with her first husband.

In London, on the ground-floor gallery, a series of Bucher’s large-scale latex Häutungen are suspended from the ceiling, hung on the walls, or simply placed on the floor. Bucher’s first Raumhaut (room skin), titled Borg (1976) stands on the floor, evoking a dark and fleshy replica of the cold-store structure of a former studio she worked, a dismantled butcher’s shop in Switzerland. Starting from very early works, the monographic show encompasses minimalist structures of Bucher’s Glue House series, Weissleimhaus (from 1976–1983), enhancing her aesthetic researches on  transformation and metamorphosis. Bucher captures these ideas in several of her works, such as her latex costume-object Libellenkleid (1976), and Der Schlüpfakt der Parkettlibelle (The hatching of the parquet dragonfly, 1983).

Through those works, Bucher doesn’t try to compensate or plead for our attention; rather, she leaps straight toward the annihilation of being captivated by ghost structures. For the impatient visitor, Bucher’s oeuvre could recedes into a vexing emptiness. But the most astonishing of all the works are a later interior moulding of a former psychiatric sanatorium, Kleines Glasportal, Bellevue Kreuzlingen (Small glass portal, Bellevue Kreuzlingen, 1988) and a film, Bodyshells (1972), documenting how surreal and imaginative aspects of her sensibility created soft wearable white foam sculptures called indeed Bodyshells; filmed while people inside them were moving around on Venice Beach in California.

Assuming we indulge the former and allow the work to fill our field of vision, we are overwhelmed by the evidence of Bucher’s labour. There are several films showing Bucher at work, walking through the spaces, spreading a gauze-like material over the floors and walls, wetting it so it adhered to the surfaces and followed its contours. In front of them we feel the ocular weariness, the unsparing grind, the sheer task-ness of it all, as both art and artist recede behind a wall of a constant work of mapping.  Her art refuses to invite us in; now that it looks intensely impressive, we see the solidified surface of her diligence, and not much else. Her virtuous gestures draws attention to themselves and obscure the rest. But the feeling of awe could soon darken, under the spectre of an illusion about a parallel world, possibly floating and existing beside us, embodying brand new and never-wearing skins.