In Samos, in the former premises of a hotel and just one mile far from the coast of Turkey, the art centre Pythagorion is attempting to activate a profusion of bridges that have a huge potential to go beyond any frontiers, maps and differences. 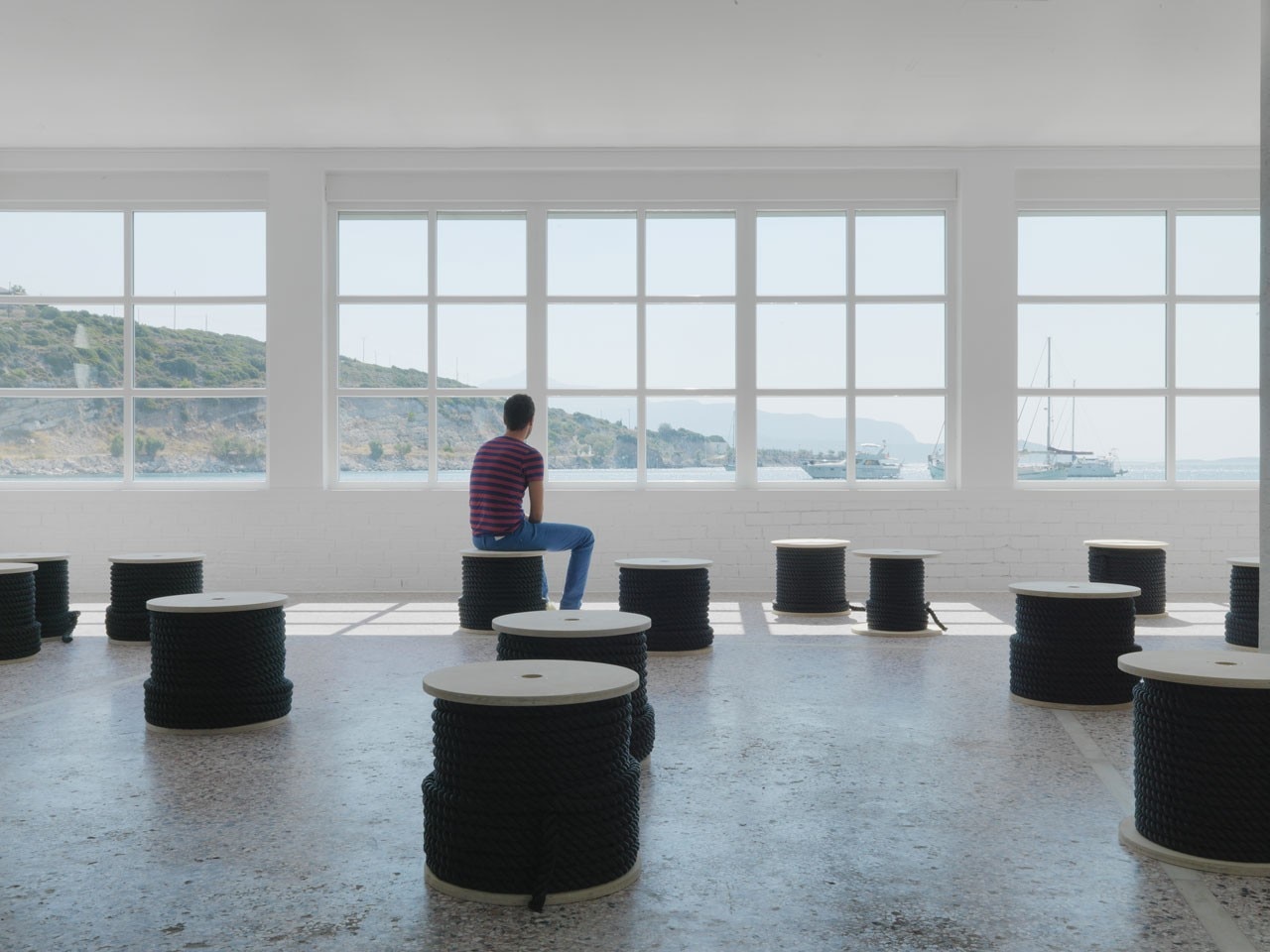 The symbolic implications of turning an old beach hotel into a centre for contemporary art speak to the heart of the current reflections on the social functions of cultural practices, their scopes, methods and approaches.
For if there are many aspects in common between a hotel and an art space – both are spaces of circulation and impermanence, which rely on transitory occupations; both are associated with forms of leisure, recreational, and business travel, and both stage specifically codified interactions between guests and hosts – it seems nonetheless a relevant sign that a run-down touristic infrastructure became the headquarters of a significant cultural venue that has the potential to introduce a very positive impact in the territory in which it inserts itself.
These discourses become even more meaningful if we consider that Art Space Pythagorion, created in 2012 by the Munich-based Schwarz Foundation, is located in Samos, a 33,000-inhabitant Greek island situated on the easternmost area of the Aegean Sea, just one mile far from the western coast of Turkey, and therefore in a territory that imposes various strands of dialogue to any cultural initiative that is committed to reaching its surrounding environment. Particularly relevant considerations are the impact of tourism on the economical, social and urban realities of the island; the inevitable relationship with Turkey, its neighbour country, with which the different and common cultural legacies seem impossible to disentangle, but also with Germany, the country of provenience of the Foundation, and, last but not least, with the fact that Samos is perceived as a possible gateway to Europe for those who try to escape the dramatic situations of their homelands in Asia and Africa.

It is with this framing that an art centre which occupies the former premises of a hotel has the occasion to deeply explore the relations between host and guest, between inviting and receiving, between occupation and hospitality. Interestingly, a part of the hotel’s old function was preserved as to accommodate a series of rooms to host artists and other associated professionals, who have the rare privilege (and upmost cinematic experience) of sleeping inside an art gallery. The entire configuration of the edifice was also maintained: a longitudinal, low structure that stretches itself in front of the Pythagorion’s pier, halfway between the port of and the tiny but densely-crowded Remataki beach, which can be observed from the large windows of the main exhibition room. The project, done by local architects Penny Petrakou and Stelios Loulourga, stands out for its simplicity and for the revision of its previous function, a true choice of adapting without making major alterations to the original architectonic form. In the inside it is structured around two main alleys that are accessible from the lobby, and which define a bifurcated organization of the exhibition space.

This configuration was particularly well used in Nevin Aladağ’s solo show Borderline (July 20 – October 10, 2014), as Art Space Pythagorion’s curator Marina Fokidis used the building’s sections to divide the artist’s works in two strands, one presenting pieces that questioned geopolitical divisions in relation to water environments (including the video works Borderline, 2014 and Border Sampling, 2011), and the other with a series of multi-channel video installations (namely Session, 2013; Raise the Roof, 2007 and Familie Tezcan, 2001) which pursue with similar reflections on boundaries and identity issues in related to various territories.

The exhibition’s central piece, Borderline, commissioned by the Schwarz Foundation and lending its title to the whole show, consists of a video of a large ship crossing indiscriminate waters. Projected in a large scale, the views of the sea crossing are often alternated with those of the screen of a GPS apparatus that shows the exact position of the large boat. It becomes clear that the artist is following the cartographic line that divides Greece for Turkey, a symbolic division whose criteria and position appear pointless, as the ultramarine shades of the waters crossed are obviously the same on both sides of the threshold.
A similar attempt to expose the arbitrary constrains of geographic delimitations is presented in Beeline (2014), a piece that dotted the environment of the central room of the art space with a series of large wooden reels, around which a thick black rope was wrapped, its entire length corresponding to the distance between the foundation’s location and the coast of Turkey. Distributed around the windowed room, the cable drums acquire a certain decorative or design-like presence. Yet their utilitarian function as stools for visitors provides a constant vivacity to a room whose windows face the small urban beach and the eastern side of Pythagorion, and their presence assures a curious exchange between the reflections triggered by the artist’s works and their concrete location.

Outside, on the entry façade, a large projection of City Language III (2009) becomes alive at night, when it is most visible and audible. The sounds of the clapping hands of the video mix with the rumours of the passersby, mostly local families and tourists, fully inserting itself in the vivacity of a Mediterranean public space. With the evening lights the art space is simultaneously integrated and distinct from this context, giving its back to its territory and its windows clearly facing Turkey. But more than just a building with a symbolic position, this is an institution whose activity is attempting to activate a profusion of bridges that have a huge potential to go beyond any frontiers, maps and differences.