Angelo Mangiarotti: a pavilion to watch the sea

Asked to design a pavilion for the display of big ships at the Fiera del Mare in Genoa in 1963, the Italian architect conceived a small construction with views of actual ships in transit. 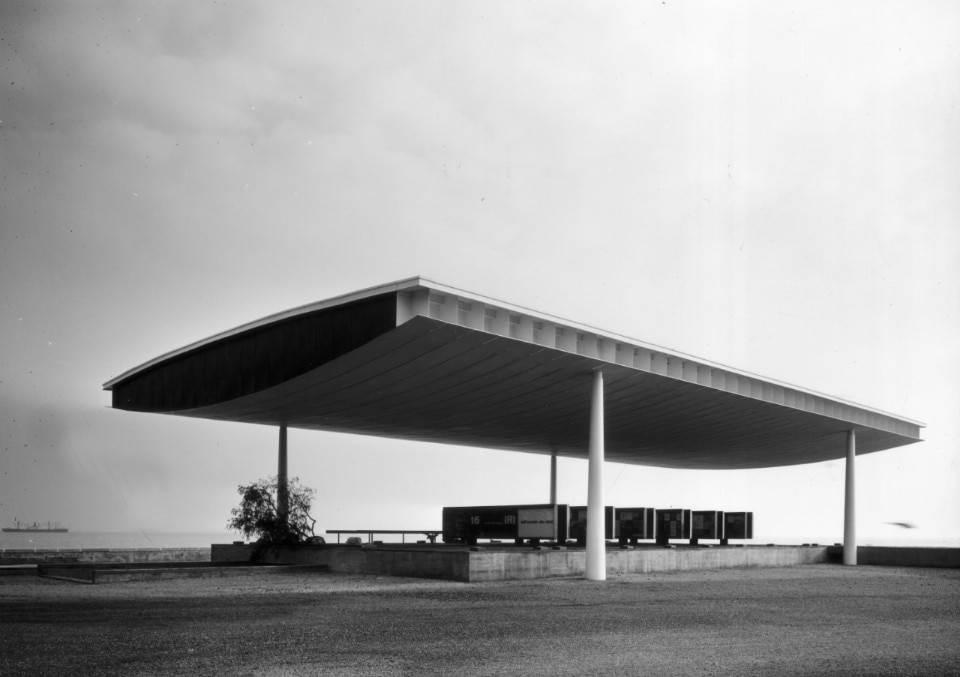 Sixty years ago, this small architectural gem even impressed Konrad Wachsmann. It placed Angelo Mangiarotti among the most original contemporary designers, together with Pierluigi Nervi and Félix Candela, after he had already absorbed the lesson of Mies, acquired directly in his (and their) American years. The exhibition pavilion for the Fiera del Mare in Genoa (1962-1963) was created to display innovations in the shipbuilding sector by 16 companies in the IRI group. It consisted in two independent and perfectly matching parts: a small semi-basement space in reinforced concrete (with its roof forming a terrace) and a great steel canopy sheltering the structure below. Of course, the exceptional structure and beautiful form of the metal construction are striking, having been commissioned to show off the constructive potential of the whole production sector. It was distinguished by a large lens-shaped canopy, hovering lightly in the sky, supported with slender grace by four tapering pillars. (“Four pillars with very elegant outlines suffice to suspend the wonderful roof above the platform-terrace,” commented Giulia Veronesi in Zodiac 11, 1963). The roof was built on the principle of the “non-thrust arch”, in which the form of the intrados collaborated structurally, while the extrados only had the function of facing and covering it.

But equally surprising was the designer’s response to the specific request to imagine a building for the display of large ships. Starting from an analysis of the site – a few metres from the sea near the point where ships entered the harbour – Mangiarotti upended the brief and persuaded his client to showcase the real ships that were perfectly visible there in their slow and continuous passage, imagining a more respectful and restrained building, structurally bold, formally light and planimetrically exemplary. The building itself was thoughtlessly demolished in 2000, even though it was still well preserved. Today we can reinterpret the project analytically through the sources available (photographs, drawings, publications and documents), which reveal a firmly established layout that offered a total experience, immersive and at times synaesthetic, through the design and distribution of the spaces that accompanied visitors to the “From Steel to Ship” exhibition.

Access to the pavilion was from the north. Shortly before seeing the profile of the large roof and approaching the deck of the covered terrace (in appearance a reinforced concrete wall more than one metre high and so inaccessible directly), visitors came to a large flight of steps leading down to the basement, containing a room for meetings, screenings and lectures. The display of exhibits began here. To the left of this large room, a second staircase exactly half the size of the first led back to the surface. “You then ascend to the upper floor by a staircase smaller than the first, so that the surprise on coming out on the exterior is stronger,” reads Domus 418 (September 1964). Here visitors found themselves beneath the large canopy and in the north-east corner, on the opposite side from the sea, before a composition of branches, foliage and stones: a great ikebana placed in a long, low planter that also formed a balustrade.

Today we can reinterpret the project analytically through the sources available, which reveal a firmly established layout that offered a total experience through the design and distribution of the spaces that accompanied visitors...

Turning round, visitors could gaze at the sea from a favoured vantage point, over a metre above ground level, sheltered from the sun and bad weather. As they advanced through the lateral space, they encountered 12 large display cases with a concave profile, each about 7 metres long and 1.85 metres high, capable of entirely enveloping bodies and gazes. They were arranged one before the other, so that each pair of display cases provided a visitor space of pondered compression around their bodies and with an overall design that was optimal for viewing the contents. The tapering ceiling of the pavilion, over five metres high, created exactly the opposite feeling, one of expansion and openness towards the sky, the horizon and the landscape. “The shape of the intrados of the steel roof – with a convex surface, like a wing rising – is part of the purpose of continuously drawing the visitor’s gaze and interest outwards,” reported Domus 418.

Beyond the display cases and towards the sea, the large deck had a walkway that extended asymmetrically beyond the overhang of the roof, a few metres to the east and almost 15 to the west, where the exhibition ended with a large propeller simply resting on the ground. An evident symbol of the client’s products, it was also a Compasso d’Oro awarded to the anonymous designer” as Bruno Munari (Ottagono, December 1972) suggested. It was also a tribute to the modern culture that the primacy of technology – as Picabia and Le Corbusier taught – had elevated to a model, as well as a pure expression of the plastic-sculptural beauty that over the years would increasingly influence Mangiarotti’s own expressive studies.

From there, in the open air, visitors could enjoy views of the horizon and complete the immersive experience of the exhibition, in keeping with the designer’s plan. (“And on the large open platform, under the suspended roof, the presence of the visitors themselves is conceived as an active part of the spectacle...” , states Domus 418.) They would view the ships in real life, slowly appearing and disappearing, entering and leaving the harbour. A true coup de théâtre that they could enjoy as they descended further towards the sea via a large flight of steps, central to the terrace, and find themselves in a space at ground level (still covered by the overhang of the superb large canopy, cantilevered four metres out over that strip of quayside), within the spectacle of nature. “A sight of pure poetry, in an open dialogue between architecture and the sea that almost breaks against it, between architecture and the sky,” as Giulia Veronesi described it.

Beppe Finessi is an architect and associate professor at the School of Design of Milan Polytechnic. In 2010 he founded Inventario, an editorial project that won the Compasso d’Oro in 2014.