On the occasion of Coachella 2018, Edoardo Tresoldi realizes an impressive architecture made out of metal, wind and natural light, in symbiosis with the wild and vast American landscape. 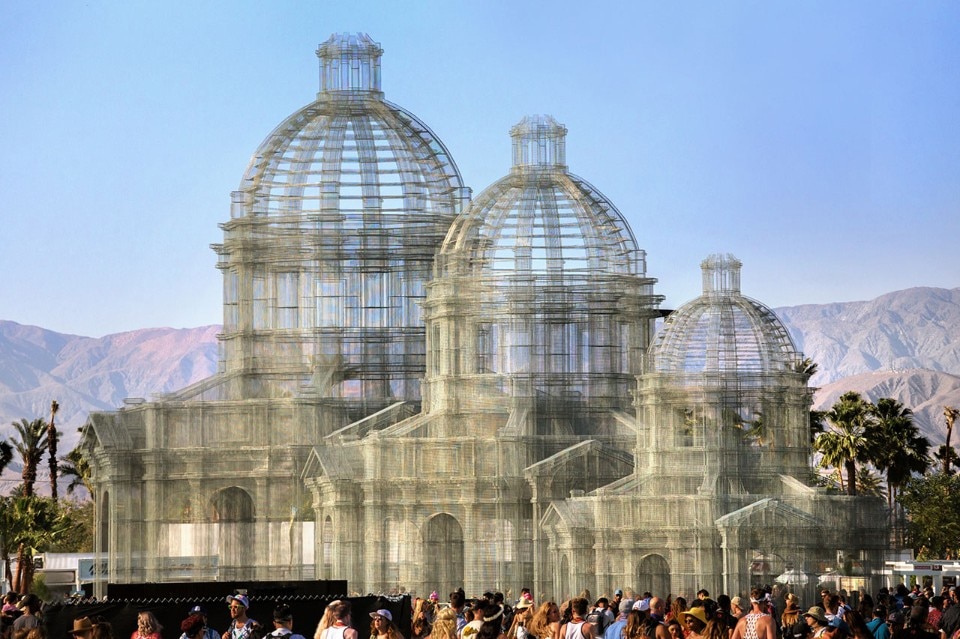 Etherea is a site-specific installation built for the current edition of the Californian festival, one of the most important musical happening in the world. The artifact, until now the biggest proposed by Tresoldi, is also the largest among the installations of Coachella, which since 2009, commissions to international artist, monumental sculptures to be placed within its extensive boundary. The artist, who further the research on form and material that animated the work for the Basilica in Siponto, has been called together with artist such as Newsubstance, Simon Vega, R & R Studios, Randy Polumbo, Adam Ferriss, Katie Stout, to generate ephemeral architectures for the most ephemeral city in the world. Etherea reaches the acme of Tresoldi research within the musical festival, after the experience of Life Is Beautiful, Roskilde, The Secret Garden Party, Eaux Claires and DERIVE.

This time, Tresoldi not only focuses on space perceptions but also reserves an important role to the wild elements that make Coachella landscape, channelling them in harmony with its addition and ordering the whole according to scale. The installation is composed by three transparent sculpture, inspired by neoclassic architecture, identical in terms of shape but characterized by different dimensions; the three copies are arranged along a line reaching increasing heights of 11, 16,5 and 22 meters. The optical game of perspective and formal reiteration produces a surrealistic effect, amplifying or reducing the distance between men and sky, thanks to the metallic mesh. Transparency, strongly characterizing Tresoldi’s artworks, informs and englobes the space. This empty Architecture breathe throughout the wind and the clouds, embracing the sublime magnitude of the Californian scenarios.

Read also: Edoardo Tresoldi and Designlab Experience envisioned in Abu Dhabi a garden where architecture and nature dance together in continuous connections and contrasts.

Drifting from an infinite natural environment to the perfectly enclosed space designed by Tresoldi, the human body becomes a key of interpretation, or better, a tool of experience and discovery. Thus, the analogy between man, architecture and landscape emerges. Linked to the recreational aspect of the festival and inherently thought as a continuous interaction with the visitors, Etherea is a public architecture, completing the ephemeral nature of an event, that is more and more considered as the prototype of the temporary city. Coachella is an ideal background for Tresoldi, because it offers him the opportunity to naturally continues his personal research on ephemeral architecture.