During the Madrid Design Festival, the Spanish architecture collective presented its latest project, Mountain in the Moon. 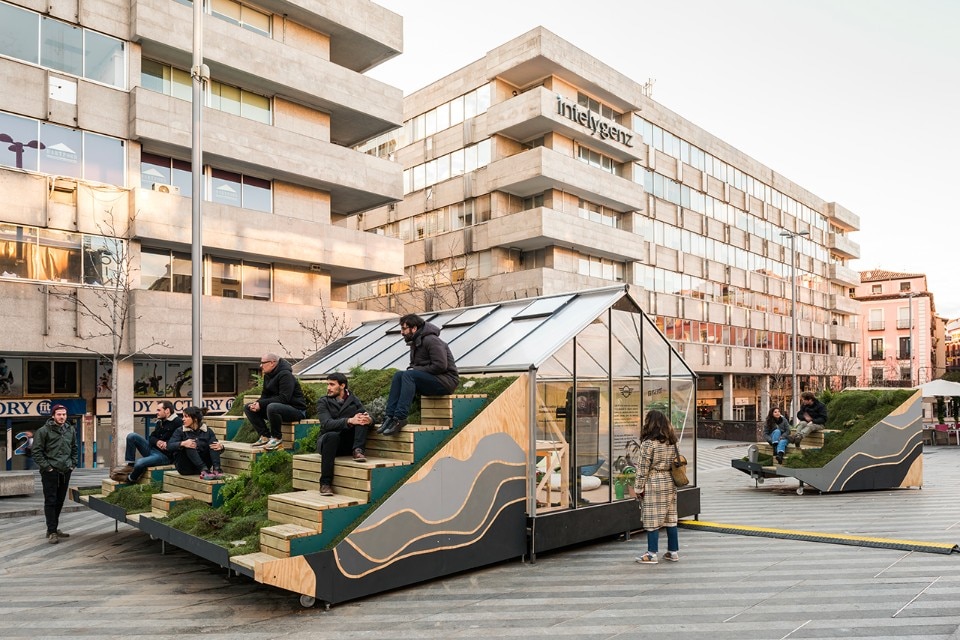 “Here you can read”, suggests a sign fixed on one of the wooden terraces standing right in the middle of the Plaza de la Luna, in Madrid. We are halfway through the first edition of the Madrid Design Festival and it is 2 pm on a beautiful and busy day of February. Yet, despite the invitation, no one reads nor seats. Except for some passers-by who stop in front of the structures to take a selfie, the three mobile architectures, embellished with grassy surfaces and plants, rest peacefully in the middle of the square together with a small glasshouse. This is the latest urban installation of the Spanish architecture collective Enorme – previously known as PKMN. Entitled Mountain in the Moon, and developed in collaboration with car brand Mini, the project aims to encourage interaction and participation of the locals during the first edition of the Design Festival – scheduled in the Spanish capital for the entire month of February – thanks to an interactive design and a series of workshops and daily conferences.

A mix between an experimental laboratory and a piece of urban furniture, the structure-performance brings together many of the features that make the success of public installations of this kind: plants, sustainability, events and experimentation. But really can a temporary realisation like this – which invites the inhabitants of the city to “sit and chat while charging the battery of their phone by means of solar or kinetic energy” – be enough “for testing participation” in the city as its designers hope for? Over the past years, “participatory design” has become a major asset for architects and designers fighting for more liveable cities. In Madrid, the idea of the city as a “communal project” takes its roots in the Indignados movement, back in 2011. “We could say that it inaugurated a period of urban experimentation”, explains Adolfo Estalella, the co-curator of the series of exhibitions “Madrid, a medias” – an archive of “disobedient stories” – currently on show at the CentroCentro of Madrid.

Read also: The Piensa Madrid platform acts as a channel for participation between the political urban space and the urban space in crisis

“People were brought to the street, to organize assemblies, to discuss and work for their neighbourhood”, continues Estalella, so that “many city dwellers started to relate to the city”. This led to the organic development of many community-led initiatives, such as communal gardens, squatted social centres and many grassroots projects that enabled people to explore new ways of inhabiting the city. “In this context”, adds Estalella, “a number of architectural guerrillas - such as Todo por la Praxis, Zuloark, Basurama, and PKMN - played a key role in re-furnishing the city with new hopes.”

Our challenge today, is to let city dwellers experiment with their urban landscape.

Gathering spaces such as theatres, cinemas and all other kinds of structures calling for spontaneous assemblies became the symbols of this architectural guerrilla. Recurring in the projects of Enorme, these type of buildings encourage citizens to become aware spectators/actors of the city. As Carmelo Rodriguez, Enorme’s co-founder, explains, “it has become a Mission Impossible to find places in Madrid where a group of people can comfortably sit together and chat without having to pay. So, at Enorme, we have become obsessed with any kind of furniture that can generate new situations. This is why we care about developing this kind of prototypes that for us are small victories on the urban battlefield”.

Yet, while Mountain in the Moon features a series of green terraces to sit on and a space, the glasshouse, to learn and exchange, its limits stand in the fact that the structure was not born out of people consultation, but it was developed as some sort of unasked offering by a private company. The members of Enorme argue that “cities can get a lot of benefit from a controlled hybridization between public and private realms. Unlike the bar terraces that occupy a very large percentage of public spaces in cities, Mountain in the Moon proposes an alternative way of mediating between private brands and public spaces”.

Unfortunately, however, the project appears as a container so carefully polished that it leaves no room for unexpected events and spontaneity to happen. At the opposite of all those collective structures built bottom-up during the years of the protests. Experiencing at first hand the consequences of such policies, the Madrid-based female collective NADA – whose aim is to create positive situations within the city for “empathic and reciprocal communication” to blossom – embraces the vision of many of 1960’s pioneers. “As designers”, they argue, “we think our role is, first of all, to build up a direct and deep dialogue with the local population. Not to impose our choices top-down. So that there can be a real awareness of everyone regarding their own abilities and creative skills.” An approach that finds deep resonance in Adolfo Estalella’s conclusions - after more than ten years of field research - who affirms: “our challenge today, is to let city dwellers experiment with their urban landscape”. So that true bottom-up actions convince the inhabitants to reappropriate the urban context and take care of it.