The book edited by Samuel Bianchini and Erik Verhagen marks the centrality of relational practices in art, whose roots can be traced back to the 60s, and underlines how the most recent artistic practices aim to create a new and direct relationship with the public. 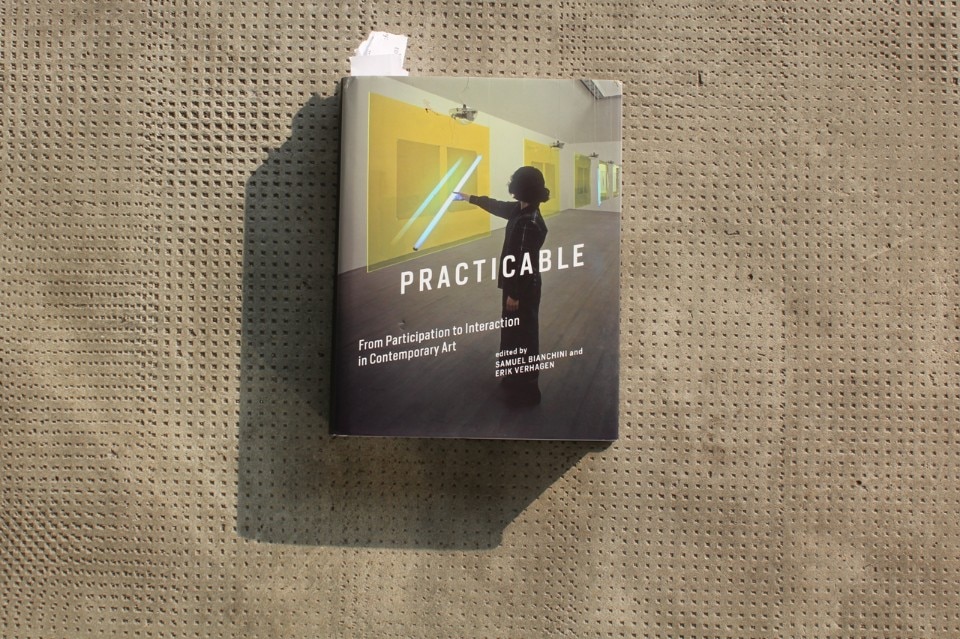 The most obvious merit of the recently published Practicable: From Participation to Interaction in Contemporary Art is that it traces a substantiated historical profile of the emergence of these themes in the artistic universe. The whole is then enriched by the views of different figures providing snapshots of vibrant research from a broad and not univocally definable field of vision.

Art historian Claire Bishop, author of significant essays such as “Participation and Artificial Hells”, the artist Thomas Hirschhorn and the director of ZKM in Karlsruhe Peter Weibel are just some of the influential contributors to this book, edited by Samuel Bianchini, artist and fellow of the University of Paris, and by Erik Verhagen, art critic and independent curator. The common denominator of all the considerations in the book is, say the writers, the philosophical concept of “being-for-others” as defined by Jean Paul Sartre in Being and Nothingness.

It is in the close dialectic between subject/artist and object/work that the French philosopher pinpoints the relational nature of public participation in the definition of the meaning of a work. This “Being-for-others” is defined and resolved in the manifestation of several instruments in the existential and artistic project. A work does not have a specific function of its own but embraces multiple tasks in the relationship with onlookers.

This ongoing negotiation of the meaning of art was also described well by Umberto Eco in his seminal Opera aperta. Forma e indeterminazione nelle poetiche contemporanee, published in 1962, in which the authors of Practicable: From Participation to Interaction in Contemporary Art reveal the confirmation and development of Sartre’s principle but also the opening of a new front, the cybernetic/technological one that was to influence subsequent considerations on participatory and interactive art.

Percorsi fluidi orizzontali by Giovanni Anceschi and Strutturazione fluida by Gianni Colombo prompted Eco to write in the exhibition catalogue that “these works not only activate a movement and a change in forms but they invite the onlookers to intervene, abandon the reassuring shadows of their habits and become directly involved.” So, art opening itself up to actions that originate as non-predetermined processes that are constantly redefined by their active relationship with the observer. This brings into play the “practical/practicable” dimension of artworks that produce effects, events, relationships and approaches that require another’s presence to exist. The artist gives rise to an action that breaks free of self-referential isolation and suddenly opens up to collective involvement.

With its probing illustrations, this book records the multiple aesthetic permutations adopted by these art practices. From the Brecht-like posters of the Critical Art Ensemble to Beuys’ social sculptures and the Internet experimentation of Superflex and Xchange, we are shown a linguistic plurality that develops and circulates naturally in everyday urban and social dynamics. Outside the museums and galleries, artists invade public space intercepting, experimenting with and generating a new way of looking at reality, and with the participation of an audience that does not usually frequent the art system’s institutions.

The pioneering actions of the Fluxus collective and the Californian artist Tom Marioni who, in 1970, performed The Act of Drinking Beer with Friends is the Highest Form of Art in Los Angeles’ streets and bars further impacted on this drive to propose art processes that do not seek market mediation and are often centred on a radical criticism of the Capitalist system.

This is the case of The Open Public Library by duo Clegg & Guttmann, installed in Hamburg in 1991 as a process of exchange and enrichment for the community, and an example of the self-management of knowledge by a population involved in the determination of a shared asset. In 1999, Superchannel by the Danish collective Superflex sought to extend the potential of pirate radio to the Internet, asking the public to determine the contents. This experiment encouraged onlookers to chat about opinions and information during programmes, prompting possible changes to the schedule in real time and making it an open and shared platform.

Similarly, but with minimal effort, in 1991, Felix Gonzalez Torres created one of his best-known and most popular installations Untitled (Lover Boys) in which a pile of coloured sweets invited spectators to become “consumers” of the work, helping the artist to activate a confusing gift economy which, as Marcell Mauss taught, is a total social fact: an aspect of culture that is related to all the others.

The body and music are also media employed by artists to construct a relational enclosure in which to reflect on the condition of genre, as in the case of performances by Orlan and Mona Hatoum and concerts by Nico Vascellari with his band Lago Morto, which triggers a situationist deviation via intense physical practice to a fast, hardcore rhythm.

This shared art dimension does not exclude the convivial sphere linked to the practice of artists such as Rirkrit Tiravanija and Douglas Gordon. The Thai artist offered hot coffee to visitors to the Guggenheim Museum in New York and the Scot drew onlookers into the activities of his free cinema/espresso bar. To ensure a comprehensive take on these themes, the book’s editors include the work and thoughts of the Paris collective HeHe, which works on the boundary between art and design in an original practice that defines issues linked to public space. By investigating subjects such as the quality of our food and the air in our cities, Helen Evans and Heiko Hansen’s work shifts the design world towards a less material dimension that looks to a radical renewal of the urban environment.

In the ensuing scenario, art becomes an ever more crucial factor in the definition of social and public space, creating a number of obstacles for the reflections and relations of our everyday lives. It is this very E’ dimension that seems to emerge like a common thread throughout the 900 pages of the book and it is well explained in the concluding interviews with figures such as Bruno Latour, Seiko Mikami, Ernesto Neto and others. Indeed, when Latour is asked to clarify the intentions of the exhibition “Making Things Public: Atmospheres of Democracy” which he curated with Peter Weibel at ZKM in Karlsruhe (2005) he says that the core problem of art is the audience and the way it looks at things.

The art world must find a profound raison d’être in the political dimension, creating opportunities for debate and the development of alternatives to a system that seems increasingly detached from the real cultural, social and economic dynamics of the world. Claire Bishop agrees with this dimension of relational art, stating that the participation needs to break free from the superficial form and open up to the everyday rhythm of change and secure more spaces for real sharing. All these potential directions and interpretations improve our understanding of the dynamics of many recent artistic productions.