The fourth workshop run by Raumlabor at the Barca quartier in Turin produced furniture and objects for the new Youth Centre, that will provide a working space for young designers and artisans. 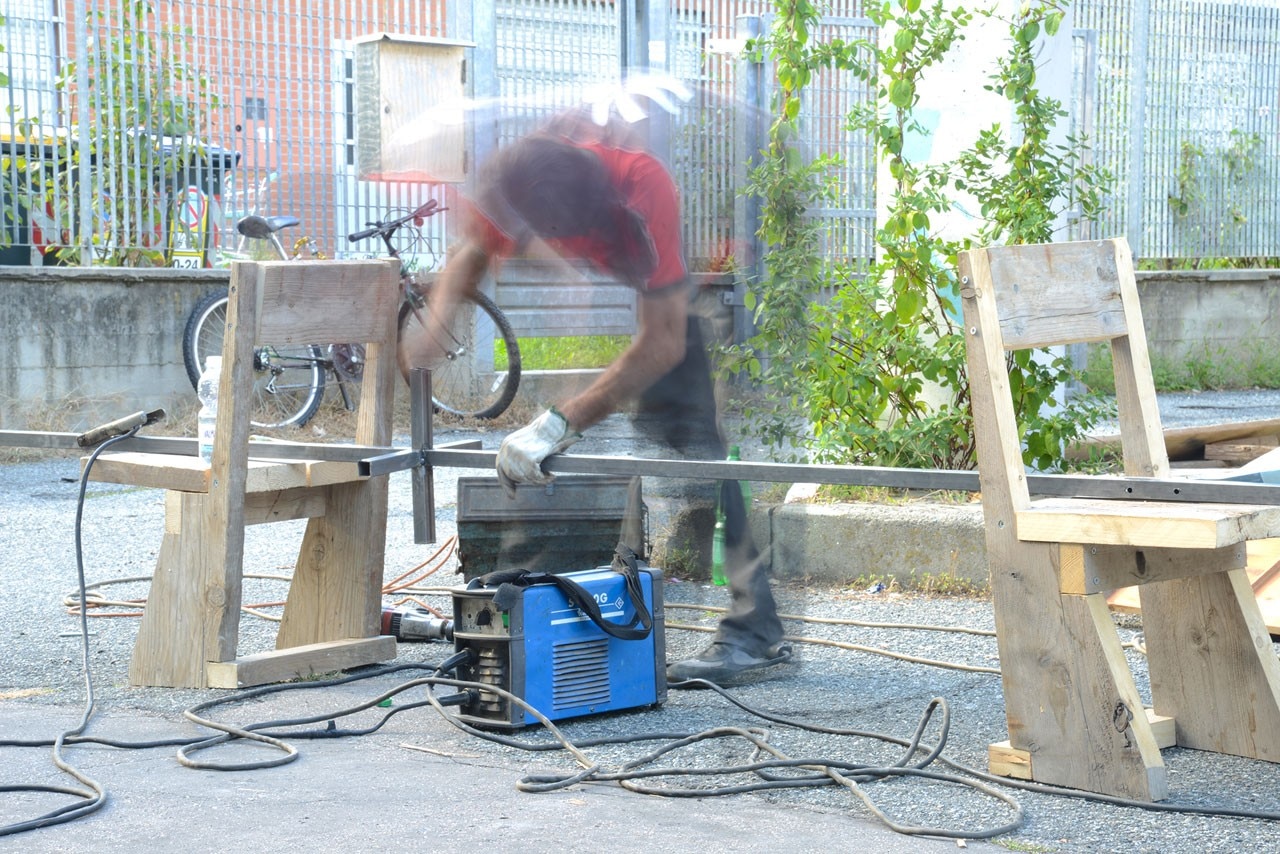 Since 2011, four self-build workshops conducted by artists and architects of the Berlin collective Raumlabor, with some one hundred young people, have redrawn the common spaces of the area surrounding Via Anglesio in the Barca neighbourhood. Now a Youth Centre, created thanks to the commitment of a group of local residents is about to be inaugurated.

Creating the Youth Centre has involved artists, the curators, public administrators, as well as a group of the quarter’s young residents who, together with visual designer Matilde Serrini and the collectives Marasma Design and Studio Superfluo, final-year undergraduates in Ecodesign at Turin Polytechnic, have assiduously taken part in the project and will activate the spaces of the Youth Centre, in a workshop-oriented vein. The project they have drawn up with Giulia Majolino and Alessandra Giannandrea, Microfactory Barca, will characterise the future Youth Centre, giving it a vocation involving training, creativity and production, while at the same time being social and relational: this will be not least to ensure its self-sustainability. To this end, the premises will house carpentry and dress-making activities, as well as seminars and meetings.

The goal of Microfactory Barca is to activate a stable and permanent space where practical knowhow and knowledge can be shared, so that it can trigger processes of cultural growth, inclusion and social transformation, by transferring the skills and professionalism linked to creativity.

The Cantiere Barca project began in 2011, following research carried out in the Turin peripheral district known as Barca by the young anthropologist Giulia Majolino, as part of situa.to, an experimental public art programme developed in the framework of the Torino 2010 European Youth Capital initiative. The project’s aim is to make the most of young people’s creativity, their demands for urban quality and for opportunities for cultural growth, by promoting processes of active citizenship, in a part of the city where mistrust and a sense of isolation are rife. To accomplish these aims, and thanks to collaboration with Goethe-Institut Turin, the curators invited the Berlin collective of artists and architects Raumlabor to take part.

The first workshop, in June 2011, coordinated by Jan Liesegang and Francesco Apuzzo, produced environmental installations from salvaged materials, through the practical action of elf-building processes. These installations were designed to enhance public spaces as social spaces, experimenting with new ways of “living” the arcades and the green area of Via Anglesio in the Barca district.

The project is produced by a.titolo in collaboration with Goethe-Institut Turin and with Turin’s Sixth Administrative District, and curated by a.titolo (Francesca Comisso and Luisa Perlo), Maurizio Cilli, Giulia Majolino and Alessandra Giannandrea.

Various different actions have been put in place in Barca, with a view to imagining a different place, of achieving a new way of looking at the quarter. These start with a process of urban exploration, from which new scenarios may emerge, activated by workshops with primary-school children of the quarter, organised by the Education Department of Fondazione Merz. During three workshops that took place between June 2011 and September 2012, the words Cantiere Barca were created using cast-off chairs, old doors and windows, and were installed on the roof of the arcade of Via Anglesio.
In 2012, 25 specimens of the Barca Chair were produced, one-off chairs designed for the occasion by Raumlabor, the sale of which will help to support the later phases of the project; using fabrics donated by Lattore Ambientazioni, among the many technical sponsors who have supported the project over the years, cloth articles were also made. In particular, some months ago during Atelier of Cantiere Barca, a series of workshops conducted by fashion designer Mariateresa Grilli with local young women and mothers, accessories and clothes were produced.

During the fourth workshop run by Raumlabor, from 9th to 15th September 2013, in the perspective of seminar-based training, new interventions was planned and objects and prototypes was produced for furnishing the Youth Centre that, with the Barca Chair, can give rise to a small-scale production in collaboration with Marasma Design and Studio Superfluo. The Youth Centre will also be able to provide working space for young designers and artisans.