Land and sea, cart and boat: this allegorical float designed by Luigi Serafini represents the genius loci of Palermo. 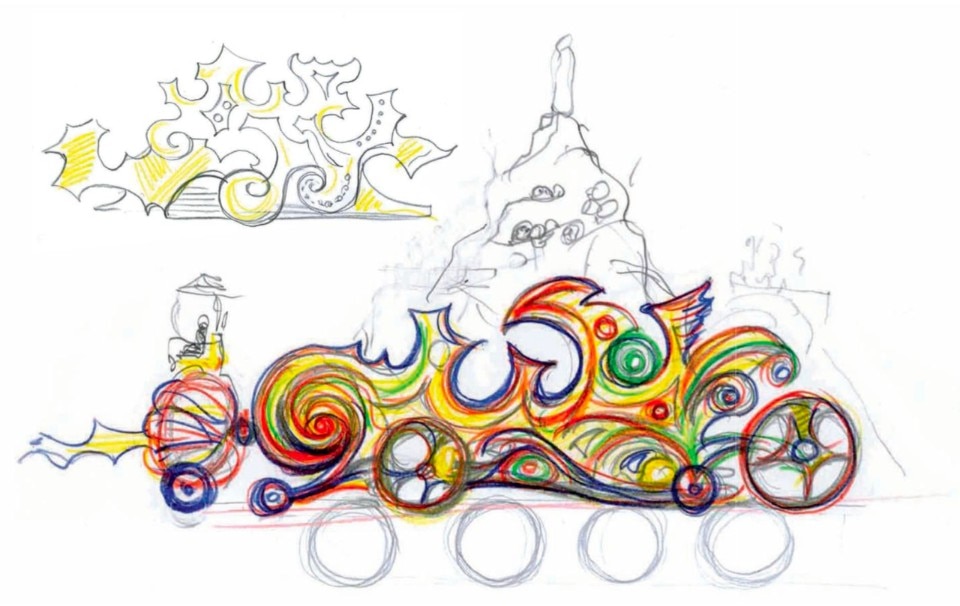 This article was originally published in Domus 944, February 2011

Every year on 14 July in Palermo, a triumphal cart bearing the statue of Saint Rosalia is drawn behind a procession that marks the end of the festival dedicated to that saint. Departing from Palazzo dei Normanni, the procession wends its way through crowds and luminaries down the long ancient Arab road known as Il Cassaro (present-day via Vittorio Emanuele) and past the statues of Spanish kings set into the baroque Quattro Canti (or “Four Corners”) of Piazza Villena. The march continues towards the arboreal gardens of Piazza Marina, crosses the imposing piers of Porta Felice, and after about a mile reaches the Foro Italico promenade. Here the cart comes to a halt and the procession dissolves into the immense popular festival illuminated by an endless display of fireworks, perhaps among the most beautiful to be seen today. […]

When Philippe Daverio asked me to invent the cart for the 386th festival, I arrived in Palermo with very little knowledge of the subject. Our Headquarters was the Nuovo Montevergini Theatre directed by Alfio Scuderi. The interpretation and redesign of tradition was a dilemma that not even the post-modern had managed to solve, and in my case religion was also to be added. Without a precise methot, my only hope was to turn to the genius loci. But where? With a stroke of luck, perhaps while walking through the streets of Palermo. And in fact, after wandering around for a few days, I came across the genius in the shape of a Sicilian cart in relief, among the souvenirs in a show window on the Corso. […]

The second suggestion came to me when I was at the port. Palermo is one big port, as the etymology of its name says, and in my cart there had to be a vessel, sustained perhaps by rough waves and guided by a swift tuna fish. Cart and vessel, earth and sea, Sicily in fact, to be combined thanks to the curvilinear baroque of the Jesuit Andrea Pozzo. This had to be the basic idea of the design. […] For various reasons the project remained on paper. But on 3 October 2010, on a pastoral visit to Palermo, Pope Benedict XVI received a scale model of the cart, a gift from the city presented by the Mayor.