Food infrastructure brings back both architecture and spatial practices to the table the political and social functions. A conversation with Cooking Sections. 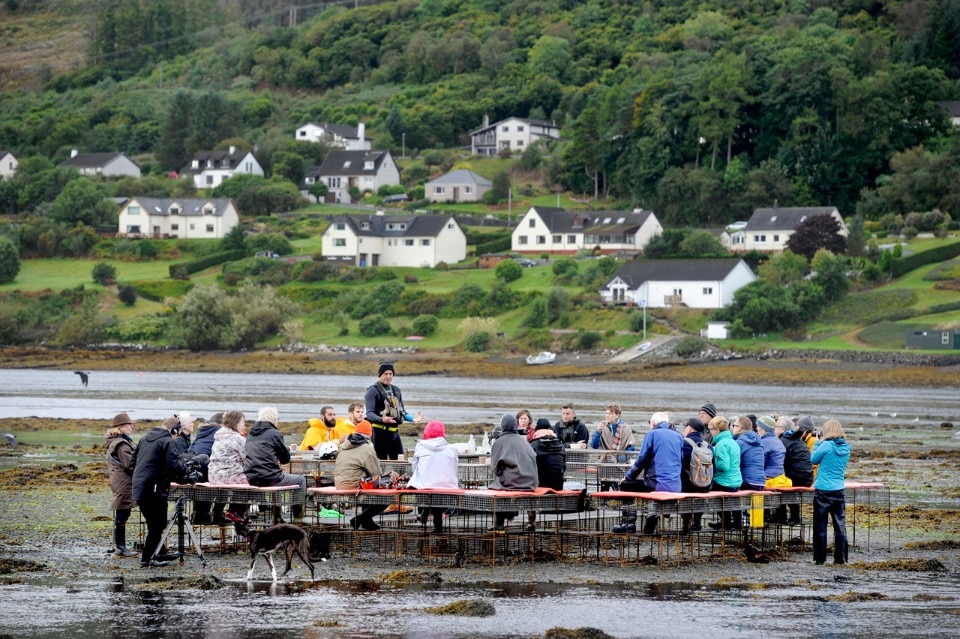 We met Daniel Fernández Pascual and Alon Schwabe in Palermo after their Meet-up for Manifesta 12 to dive into their incredible body of work and to discover their manifold approach to contemporary spatial disciplines. Their field research in Sicily is just at the beginning but already promising for their installation that will be open in Palermo from 16 June 2018.

We are fascinated by your practice and it is difficult to define it within the framework of established disciplines. Could you tell us something about your education and how did you start to work together
Daniel Fernández Pascual: I was trained as an architect and Urban designer while Alon’s background is in theatre performance and dance. We met at Goldsmiths, while studying at the Centre for Research Architecture, and we started collaborating on a self-initiated project in Kivalina, Alaska. After this project, Cooking Sections emerged.
Alon Schwabe: For a year, we looked into how climate changes were registered in the community of the village since their partially hunting-based diet is very influenced by weather events. Here, food became an operative tool to register the transformations that have been taking place in the last years.

How does an architect end up doing these projects? How do you get from architecture to use food as a matter of research?
DFP: Looking into food infrastructures many times is the trigger that makes us going in completely different directions. We see food more as a project than a practice; for now, food is a tool that works to convey our research until we will find a better one. Like, recently, we have been dealing with the financialization of nature and it has become a parallel line of work.

In this gallery: Cooking Sections, Climavore
01 / 12
Share
Pin it

At the Manifesta 12 Meet Up you presented the project The ‘Next “Invasive” Is “Native” where you question the commodification of an invasive plant and how to make use of it in order to change the perception of people through ice-creams, for instance. How did this project come about?
AS: We were invited to exhibit at the Glasgow International and we researched the transformative role of ice-cream parlours that in Scotland were seen as a “culturally invasive” and later became completely absorbed and celebrated. Around 1900s in Glasgow there was a migration wave from Italy and many Italians opened ice-cream cafés, a profession that was not under the control of local lobbies’. It was interesting to look into the history of these places, social spaces of emancipation and “promiscuity” where women could speak to men and hang out on their own at night.
DFP: Then we focused on the “invasive” plants like the Japanese knotweed having been stigmatized in the UK as toxic in the context of real estate to the point that a new-born lobby of eradication companies is making a fortune out of it. Actually, you do not get a mortgage if the plant is found on your property. We talked to botanists who studied the plant for decades to prove that it is as invasive as any other plant, the fact that it is new and comes from abroad makes the plant a target for fear campaign against it in nationalistic discourses. So, we provided it and other “native” and “non-native” “invaders”, like Ground Elder or Nettles, to ice-cream makers as raw ingredients and the names of the ice-creams were following the scaremongering headlines from newspapers: among the strawberry and the pistachio labels there was “the plant that can sink your mortgage” ice-cream.

Is there one project in particular that could represent your specific way of working?
AS: The Empire Remains Shop is a good example. It is a whole body of work and a set of strategies to explore, interrogate, and rethink colonial food infrastructures and their contemporary legacy. It is a way to question the manifestation of neoliberal food markets that have affected, and are still affecting, us on all levels of life and society.
DFP: Our work is an evolution; one project is the continuation of the previous one: they build up towards something bigger and, in this way, we accumulate more knowledge and tools.

Sign up for our Newsletter and get domus in your inbox
In this gallery: Cooking Sections, The Empire Remains Shop
01 / 12
Share
Pin it

Since you travel a lot and you have experienced different parts of the world, how do you see South of Italy, specifically Sicily, in relation to the piece you have been asked to develop for Manifesta 12 in Palermo?
DFP: We are researching the scarcity of water. This topic leads to questions like: is there an actual lack of water? Or is it a problem of water mismanaged? Who is taking advantage of resources? Is it equally distributed? You can say things about the present conditions and you can do the same for London with affordable housing: is there really a lack of housing? Who defines affordability? Who gets the profits?
AS: If you walk around Palermo, and around Sicily, there are incredible testimonies of extremely developed civilizations, like the water infrastructure, that are all around the island. For us it is fascinating. There is so much to learn on how people have been dealing with harsh weather or soil conditions over thousands of years yet developing one of the most productive agricultural systems of irrigation and microclimates across Europe.