From Cantagiro to Festivalbar, the stage design of the Italian summer festivals

For over forty years the Italian summers have been defined by a series of music competitions that, through their scenes and stage decor, have marked the evolution of the country’s costumes. 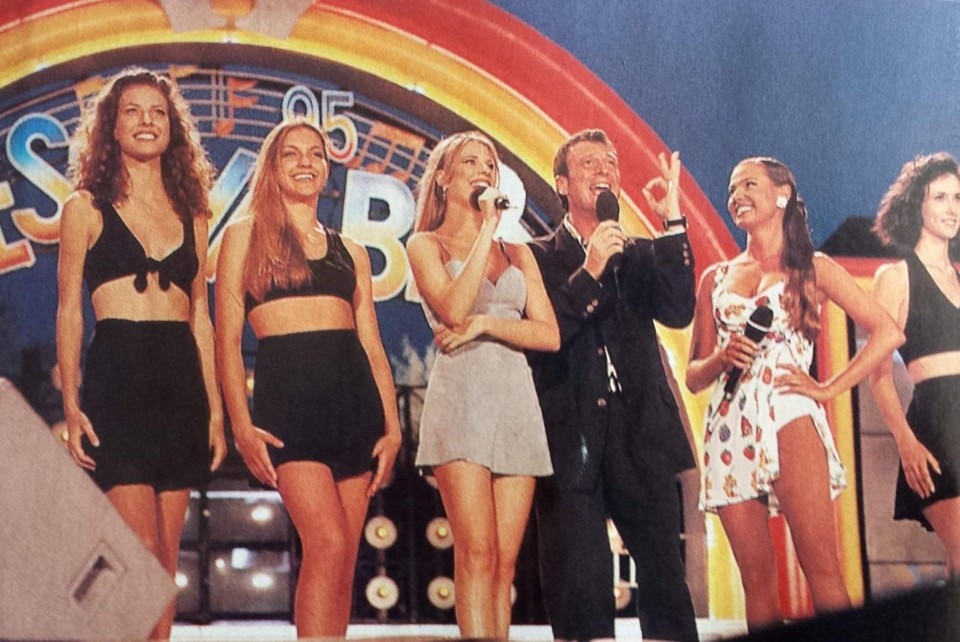 Italy is the country renowned in the whole world as the land of the bel canto, to the point that a few years ago the former prime minister Matteo Renzi, on a state trip to Germany, was greeted at the airport on the notes of Azzurro rather than of those of the Italian national anthem.

Bel canto that in Italy always found a home on television stages rather than in those muddy fields that much have given to the epic of the British rock summers. Apart from a few historical episodes – like the turbulent Festival of the Youth Proletariat held from 1971 to 1978 at the Parco Lambro, Milan; or like other performative arts events, see the Santarcangelo theatre festival – the summers in the Belpaese, since pop music exists, have been defined by a series of music competitions-cum-festivals mostly concerning the discographic side of music rather than its rebellious one.

From the Castrocaro Festival to Festivalbar, these competitions have accompanied both musically and aesthetically the evolution of the nation, of its costumes and language.

The Sixties, the golden age of the Italian record industry – and, as a consequence of its graphic output (think, for instance, to the fact Guido Crepax was often lend to the illustration of record covers, or to the experimental mentality characterising the production of the RCA Italiana graphic department) – were rich in summer music competitions: the Castrocaro Festival, Un Disco per l’Estate, Festivalbar, and the Cantagiro.

The dominant trait of these festivals was their itinerant nature, despite the fact they were aired on television. This asset therefore forced them not to use the avant-garde theatres of Italian state television RAI but, instead, to make virtue out of necessity in venues such as thermal baths, indoor arenas, football grounds, squares and casinos. A factor that, especially during the ‘60s and the first half of the ‘70s, led to unique stage decors solutions where optical and geometrical scenes had to dialogue with stages looking straight out of a village green fun fair, enriched by an explosion of flowers inspired by what, in those days, was the culprit of Italian music events: the Sanremo Festival. Think that to flowers was even dedicated one of the many competitions of the time, the Festival delle Rose.

Take for instance the 1966 Cantagiro date at the Fiuggi thermal baths. The only elements nodding to the then ongoing Beat generation were a Space Age-flavoured circular drums basement in orange and white, and the outfits of the competing artists, like the total white uniforms of The Primitives (we would eventually spot them again in 1995 in Blur’s The Universal video, a tribute to the dystopian and Space Race atmospheres of Stanley Kubrick’s films).

Sanremo’s quintessentially Christian-Catholic formal and prude attitude, in fact, generally dominated the music contests of the whole decade. A series of charming but placid holiday destinations were selected: from the Recoaro thermal baths (where many Cantagiro finals were hosted) to the Saint Vincent Casino (Un Disco per l’Estate), not to mention Chioggia (Festivalbar) and, above all, the Emilia-Romagna riviera (Festival di Castrocaro, Festivalbar). This strip of coast on the Eastern side of Italy became the post-war paradigm of Italian summers, taking the role that once belonged to the Liguria riviera, home to the Sanremo Festival, and guardian of an exclusive sophistication still rooted in the belle époque.

Read also: Terraforma, are we ever going to dance again?

Although the Cantagiro did not embody a revolution scene-wise, it represented an anthropological one. By abandoning the television studios, the performances slipped to the background, allowing the audience, who followed the singers across Italy like the cyclists in the Giro d’Italia, to become the protagonist of the event. One could even argue that the Cantagiro – like its cycling equivalent – succeeded in doing more for the cultural unification of the country than politics did.

The Italian landscape, with its morphological variety, would therefore become the scene against which the made-in-Italy design of the times unfolded: from the Innocenti Minis and Lui scooters on which band I Camaleonti travelled during the 1968 Cantagiro, to the promotional merchandising, like the Amaro Cora and Bulova watches-sponsored tees awarded to the winning artists in the fashion of the Giro d’Italia’s pink shirt, or like singer Gianni Morandi’s promo caps shaped on the model of those worn during the American Civil War by the northern states army.

The dialectic between performance and territory unfolded similarly to the experience of the Giro d'Italia (1971) by Lapo Binazzi and other members of the Florentine avant-garde movements.

It’s only from the second half of the Seventies, though, that stage design started to acquire a more prominent relevance in conjunction with the rise of Vittorio Salvetti’s Festivalbar over the decaying competition. On the ending night of its 1979 edition held at the Arena di Verona the Italian audience witnessed the unusual asset featuring two stages. This allowed the musicians – Rockets on one stage, Pooh on the other – to be less constrained to the tight stage changeover times and to curate their own scenes. 18 and 5 Watt lasers by Spectra Physics therefore became the true protagonists of the night, projecting Italy towards a new and total use of lights.

Over time, in fact, Festivalbar would turn into the thermometer of Italy’s aesthetic and musical summer trends. Afterall, in the Eighties the festival moved from the more traditional RAI [Italy’s public service broadcaster] to the up and coming and affluent Fininvest, the media’s embodiment of the Italian Yuppy pipe dream. The scenes therefore acquired opulent and postmodern elements, balancing metaphysics with discotheque interiors. Traits that also characterised the stage decor of the 1981 Sanremo Festival (perhaps the most iconic scene in the history of the festival) and the stages by Filippo Panseca for the Italian Socialist Party rallies – themselves festivals featuring pyramid-shaped screens and live performances from famed pop artists like Ornella Vanoni.

Several are the highlights representing the epitome of this style: the silver steps of the 1984 edition, the metaphysical architectures against, in 1992, which Luca Carboni performs his summer anthem Mare, Mare – the incarnation of what author Pier Vittorio Tondelli described as Adriatic Kitsch in his epic of the Ninety-Eighties Emilia-Romagna –, the performances (rigorously in playback) of Righeira at Festivalbar 1983 and 1985, where the duo’s style perfectly blended with the stage decor. Righeira – who on the cover of their debut album wore ties from Ettore Sottsass Jr.’s Memphis series – became the face of that taste à-la Fiorucci, that despite being rooted in the style of the 1950s, was able to create a new and disruptive aesthetic language, synonymous of the 1980s Italian design in the world.

Similarly, also Un Disco per l'Estate – although briefly under the new moniker of Saint Vincent Estate – followed this trend, as seen in the cathartic performance by Alice, dressed in a white silk kimono, during the 1985 edition, where lasers meet with postmodern and metaphysical volumes.

These are the years where Festivalbar began to develop a better-defined, quintessentially Fininvest, corporate image. This can be seen starting from the Nineties, when the festival acquired a new, sinuous logo that was very much reminiscent of that used by the satirical newscast Striscia la Notizia, which was being aired by the same broadcaster. Definitely a logo that resented of the enthusiasm for Windows ‘95 and Word Art, and that now, although resulting distinctively out of fashion, could – in a postmodern twist – turn into an interesting source of inspiration for meme culture.

The rainbow was, in fact, broadly used for the scene of Festivalbar 1995, where a massive red-and-yellow arch structure was put at the bottom on the stage background as an entrance gate; a solution reminiscent of the one that shocked the audience of the 1978 Sanremo Festival.

For Festivalbar 1994, instead, the scenes had drastically changed nodding to the incoming Cyberpunk culture by piling up a series of TV sets – like those that you would usually see in exhibition settings – against a minimalistic and industrial-flavoured background made by the steel framework of the truss. To counterbalance this step towards the future, though, was host Amadeus with his jokes that – in times of cancel culture – now seem more outdated than ever, belonging to a past made of television quizzes and showgirls.

Then, the graphics made for the 1999 edition of the contest, portraying the flower power revival aesthetic that for the whole decade had been crossing Western music – from the daisy age of American hip hop to the British second summer of love. Stunning, or perhaps disorientating, was the backdrop against which all these scenes operated: festival bills that juxtaposed the likes of Bjork and Elastica to Miguel Bosè and host-comedian-performer and jack of all trades Fiorello in his questionable ponytail hairdo phase. These were truly absurd (and postmodern) crossovers that work in reminding us of days when television had the power, now lost, to homogenously influence the costumes of a nation.

A crisis, that of summer music competitions, that has been lasting for over ten years now. It was 2007 when Festivalbar, before definitely calling it a day, tried its last twist of fate by making the then roaring MySpace part of the event and crowning Tokyo Hotel as the winners of its Digital award. A legacy – like the lines of host Amadeus – that now stands more remote than ever, in times of a burgeoning emo revival promoted by a generation grown up well after the fall of MySpace.

Drawing, however, a fil rouge between the contests of the Sixties and those of the Noughties is a country that – well ahead of all the ramblings on the theme of the Italian “great beauty” that have been dominating the public discourse for nearly a decade now –, outside of television studios, was able to celebrate its artistic and architectural past despite looking at the present (and sometimes even at the future) of music. These events never hid Italy’s historical gems behind overwhelming scenes, but they managed to establish a dialogue between the two. Think of the beauty of the Recoaro thermal baths gardens that – together with the charm of host Alberto Lupo – take the scene in the final of Cantagiro 1972, or of the way the Arena di Verona always accompanied the long hot summers of the Italians who, stuck to their sofas, followed the Festivalbar.

If, after all, nostalgia is the best form of escapism we can’t help but to retrieve the red and blue Festivalbar CD compilations, or a 45rpm vinyl featuring the sticker “record competing to Un Disco per l’Estate” – another jewel of Italian mid-century graphic design – and, orphans of the music summer contests of the past, abandon ourselves to the August heat.