From concrete to urban green: a metamorphosis taking place in Paris, Shanghai and more cities

The radical solution that more and more cities are proposing for traffic calming is to turn entire infrastructures into new urban parks. 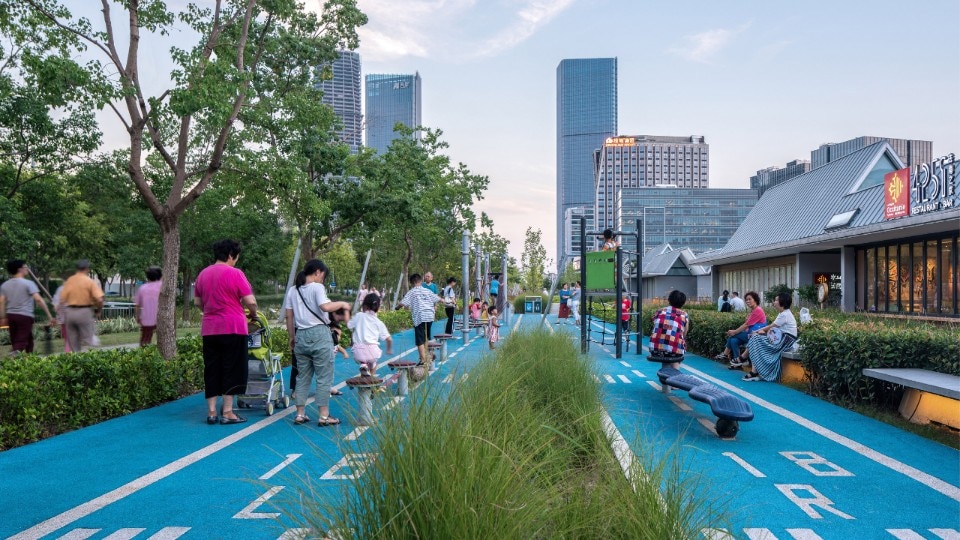 Among the effects of the limitations imposed by the spread of Covid-19, there is undoubtedly a shared sentiment among city dwellers for having more green spaces available, highlighting the need for often radical change to create places that are not only recreational, but can play a functional role in cooling urban environments, or reducing flooding in colder, wetter climates. The pandemic, in turn, has given city authorities the opportunity to accelerate experiments with traffic-calming initiatives, including closing some streets on weekends, expanding bike lanes and creating new pedestrian zones.

Not the most recent example, Cheonggyecheon is a linear park not far from downtown Seoul. This public area, of about 10.9 square kilometres, is located on the banks of the river of the same name, paved with cement in the ’40s for sanitary reasons and, thirty years later, transformed into an elevated highway that crossed the heart of the metropolis.

At the turn of the millennium, however, then-Mayor Lee Myung-Bak successfully campaigned to restore the Cheonggyecheon. From 2002 to 2005, the obsolete elevated highway was transformed into a multifunctional, contemporary linear park. Despite the cost, benefits have included a significant increase in overall biodiversity, a reduction in the urban heat island effect, improved public transportation and quality of life in the city centre, and increased economic development in the surrounding area.

In Paris, on the other hand, there is much discussion about the ambitious project to convert the Champs-Élysées into an urban garden. Philippe Chiambaretta, the architect in charge of the project, reflects on how one of the most majestic avenues of Haussmannian Paris is now a symbol of the problems that characterize contemporary cities - “pollution, the place of the car, tourism and consumerism” - dreaming of giving back to the French capital a more ecological and inclusive human place.

Architectural firm Sasaki recently finished a project to reuse the former Longhua Airport - Shanghai’s only civilian airport until 1949 and closed in 2011 - in the Xuhui River area of Shanghai. At 1,830 meters long, Xuhui Runway Park was built on the former runway site, transforming it with pedestrian walkways and bike lanes, while six rows of trees run the length of the park.

Sasaki also wanted to incorporate parts of the historic concrete runway, which had been covered with temporary pavement after the airport closed, into the park to reflect the site’s history. The main pedestrian path through the park is a 10-foot-wide section of runway that still retains its original directional markings.

It is also continuing to make waves in Barcelona’s massive 10-year plan to convert one-third of central streets into green spaces. The program calls for the creation of a super-superblock, including 21 roads in the Eixample district. Vehicular traffic will only be allowed along the perimeter, leaving the streets within the neighbourhood accessible only by motor vehicles to residents, essential services or deliveries. The plazas and streets included in the plan will be planted with trees that, when mature, will shade 6.6 hectares of new green space, in an area that will contain 33.4 hectares of additional pedestrian space.