Inspired by the new Pigalle Converse collection, Ill studio and Nike renewed the Parisian court for the fifth time using purple, blue and mint tones together with large numbers. 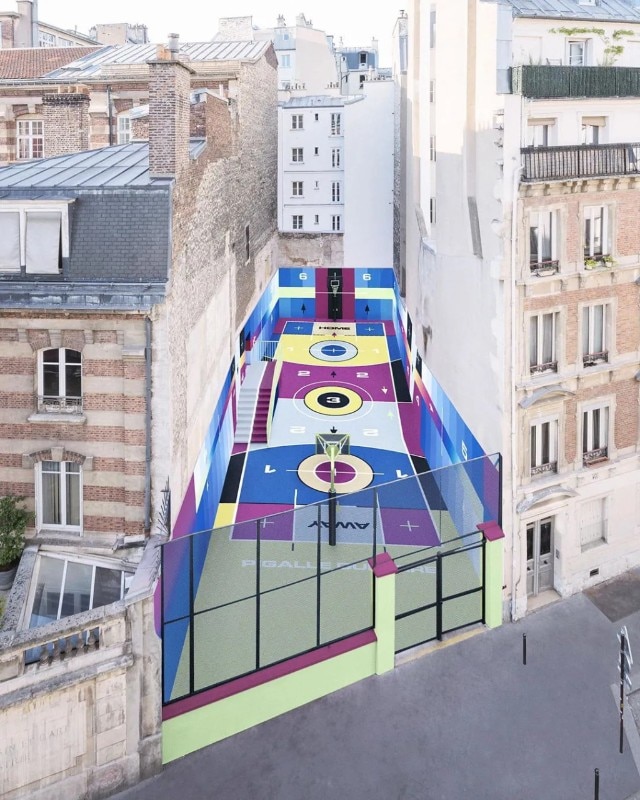 Pigalle basketball court has been renewed again after the last restyiling of 2017. The court is located between some of the buildings in the 9th arrondissement, Paris, not so far from Montmartre and Moulin Rouge. During the years, the collaboration between the fashion brand Pigalle – founded by Stephane Ashpool, who opened the first store in 2008 – the design firm Ill Studio and Nike has led to different transformations thanks to the use of color, making the court recognizabile everywhere and a must-to-visit place to take pictures of.

After its construction in 2009, with light tones and drawings, the basketball venue has seen geometric shapes in white and purple (2012), primary colors (2014) and bright pink and blue shades (2017). The last renovation, the fifth, is unveiled along with new Nike Pigalle Converse collection, that inspired the use of purple, blue and mint in the camp. Large digits and text were painted on the floor to differentiate the areas. Basketball lovers can also find a court of this kind in Mexico City – at the Gimnasio Olímpico Juan de la Barrera – and in Beijing, China, recognizable by fluorescent colors and made of a material coming from recycled shoes.