“I see a complete revolution coming, and if it’s a bloody revolution, man will lose. If it’s a design revolution, using resources efficiently and competently, then all humanity can win.” (R. Buckminster Fuller, 1975) 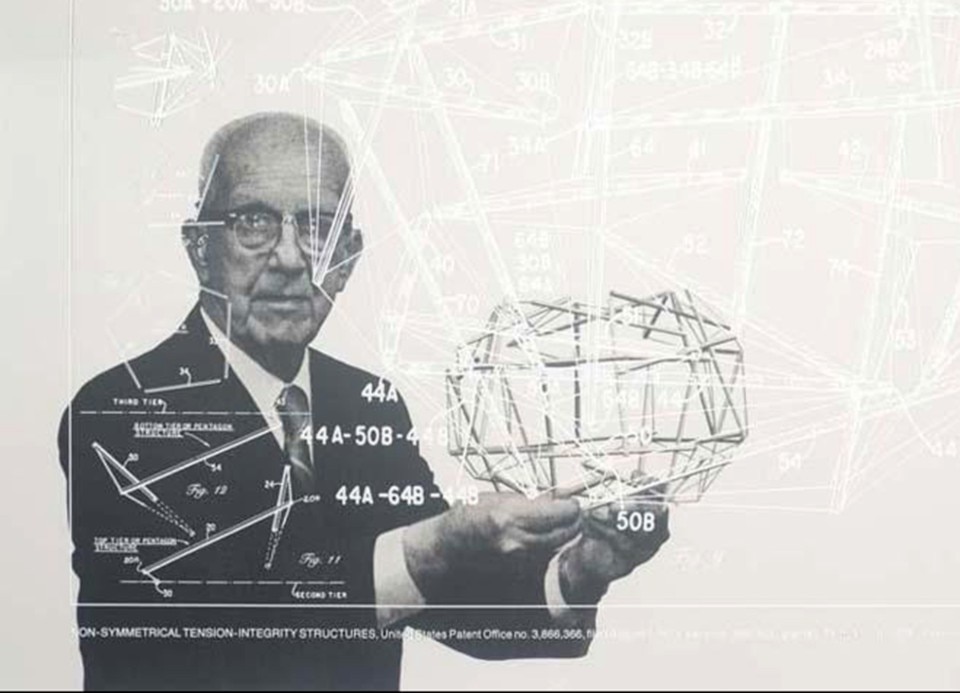 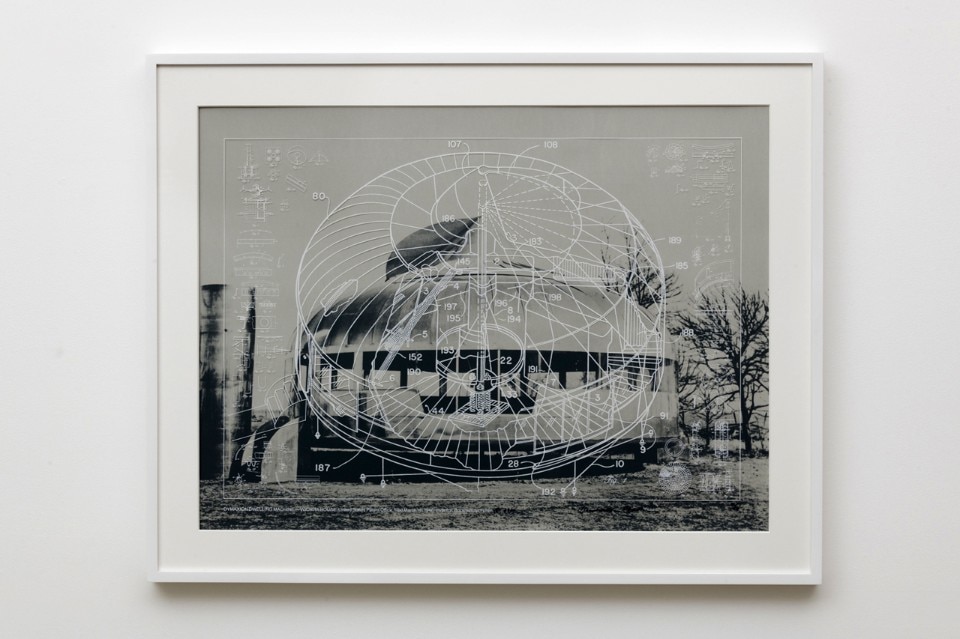 A real inventor, practicing and investigating within the field of architecture, extending nonetheless his research and action to the whole human and physical realm,  Richard Buckminster Fuller has ceaselessly been working on the reframing of consolidated thoughts to propose new visions of the world, and consequent new design ideas.  Fuller’s life was peculiar since the beginning and the early formation years: born in Milton, Massachusetts, in 1895, he grew up spending a long time in a farm in the State of Maine, where he could develop a close relationship with the world of machines and boats, and a deep knowledge of features and transformation of materials such as wood. He enrolled at Harvard University in 1913, and he dropped two years later; serving in the U.S. Navy 1917 to 1919, he could express his drive and interest for invention, to furtherly combine this spirit with a wide and integrative approach to problem solving while spending a training period at the U.S. Naval Academy.

I found that my Navy experience was that you were doing continually more with less.

After landing different jobs and facing a deep personal crisis, he got over it with a stronger, reinforced motivation in investing the knowledge and cultural assets he had acquired in serving the collectivity to improve its life conditions. In 1927, the years of his Dymaxion (DYnamic MAXimum tensION) experimentations started, exploring more of a vision of the world than a simple technology ; this research was started in order to bring the building industry to the same level of technological innovation than the other industry sectors, by applying a process of spatial optimization enabled by innovation in geometries (the Dymaxion Air-Ocean World Map, a planisphere developing all lands above sea level while reducing cartographic deformations to the minimum, could describe the whole world by dividing it into triangles) and building techniques. After a first experiment for an airborne house, the Dymaxion House (1927) marked the beginning of an era of experimentations and visions on dwelling: the house was seen as an industrial product, prefabricated and deliverable.

Richard Buckminster Fuller, the 1940 Dymaxion House, in construction and completed. In Domus 596, July 1979

Richard Buckminster Fuller, geodesic dome for the Milan Triennale, 1954. View of the interiors curated with Roberto Mango. In Domus 299, October 1954

Richard Buckminster Fuller, geodesic dome for the Milan Triennale, 1954. Plan of an interior solution by Roberto Mango. In Domus 299, October 1954

Richard Buckminster Fuller, model for the United States pavilion at the Montreal exhibition, 1967.

Richard Buckminster Fuller, the United States pavilion at the Montreal exhibition under construction. In Domus 441, August 1966

Richard Buckminster Fuller, the United States pavilion at the Montreal exhibition on the cover of Domus 441, August 1966

Richard Buckminster Fuller, the 1940 Dymaxion House, in construction and completed. In Domus 596, July 1979

Richard Buckminster Fuller, geodesic dome for the Milan Triennale, 1954. View of the interiors curated with Roberto Mango. In Domus 299, October 1954

Richard Buckminster Fuller, geodesic dome for the Milan Triennale, 1954. Plan of an interior solution by Roberto Mango. In Domus 299, October 1954

Richard Buckminster Fuller, model for the United States pavilion at the Montreal exhibition, 1967.

Richard Buckminster Fuller, the United States pavilion at the Montreal exhibition under construction. In Domus 441, August 1966

Richard Buckminster Fuller, the United States pavilion at the Montreal exhibition on the cover of Domus 441, August 1966

I saw one area where science was not being applied: the home (…) Antipriority as the home front. So in 1927 I committed myself to the idea of exploring the most advanced production techniquesto develop some prototypes for environment controls for human beings that would weigh very much less, and I found I could do it.

The Dimaxion House was a prototype developed on the figure of a spherical cap in metal laminate with an aluminum structure really easy to assemble, a fundamental unit that generated an entire family of inventions, all gathered underneath the same label: the streamlined Dymaxion Car (1932), with its aircraft-inspired lines; the integrated, metal molded Dymaxion bathroom (1938); the Dymaxion Development Units (DDU), mass-produced housing units developed on the model of circular grain bins which would never hit the mass market, but were used during World War II as service units for difficult environments.

Since 1947, the main subject in Fuller’s research became the geodesic dome. Once more, the core of a whole research was going beyond a specific technology, focusing on a geometric figure in its multiple performance features: the figure of the dome was drawn from studies on Earth cartography, on tetrahedral structures of metals and on the geometry of sphere as the only solid to be  capable of holding the maximum space in the minimum enveloping surface. The domes are constituted by tetrahedrons, regular pyramids made of four equilateral triangles, granting high resistance values whatever material they were made of (they came in plastics, metal, cardboard). The first experimental applications came around 1946 following one last evolution of the Dymaxion concept with the Wichita House (Kansas) and heading towards new military uses, destined to a long evolution. Later on, the building for Institut National des Sports in Paris (1952), the award-winning installation at Milan Triennale (1954) and the dome for Ford Motor Company in Dearborn

As it would also happen with the Tensegrity Structures ( structural models, self-supporting on principles of tension+integrity thanks to a combination of tense elements such as bars and wires) which Fuller exposed at the New York Museum of Modern Art in 1960, the geodesic domes were a case of large success and diffusion mainly based on a design figure, that would gradually extend to different uses, revolutionizing both specific architectural culture and mass culture. After being the subject of a largely successful series of lectures at Yale University in 1952, these works would in fact grant Fuller with the access to the American Institute of Architects in 1959. Through the years, Fuller extended the span of uses and scales for the geodesic dome principle, from his concept of a dome above the city of New York to his repair shop for the Union Tank Car Company in Baton Rouge (1958); from the light structures for agricultural purposes to emergency housing units up to hippy settlements such as Drop City ( Trinidad, Colorado, 1966). The most famous geodesic dome would be the United States Pavilion at the Montreal Expo67 exhibition (1967), the icon of an era, of an entire space-making culture that related to several radical positions in architecture, expressed in those years by the likes of Archigram and Cedric Price.

I know that quite clearly man was designed to be a success, and this is due to the complete change in know-how, and it comes as a surprise because nobody ever thought of applying science and mass production really efficiently to the environment controls of human beings to make them a success.

By those times, Fuller had already become a global cultural reference thanks to his alternative thinking, inspiring several relevant figures of the following decades (such as Norman Foster). Fuller always showed a positive approach to technology and innovation, seen in their capability to solve economic, social and cultural inequalities. One of the first to conceive and spread the word of sustainability as a commitment to humankind at a global scale, since the 30s Fuller would promote a vision of the world as an integrated network of connections — mainly through texts such as Nine Chains to the Moon (1938) — a structure, both immaterial and spatial, that could be translated into fundamental shapes to develop further projects in different disciplines: such position was expressed within global think-tanks such as the World Society of Ekistics, the association for the science of human settlements created by the Greek architect Constantinos Doxiadis, that sported Fuller as its spokesman at the United Nations, as well as in his teaching and lecturing activity — from the aforementioned Yale lectures to his assignment at Southern Illinois University — and in his vast catalogue of publications, including the well-known Ideas and Integrities (1969) and Utopia or Oblivion: The Prospects for Humanity (1969), and the two editions of Synergetics: Explorations in the Geometry of Thinking (1975,1983).

If you want to teach people a new way of thinking, don't bother trying to teach them. Instead, give them a tool, the use of which will lead to new ways of thinking.