“To us, the Modern Movement is anything but dead: our modernity consists precisely in continuing the tradition of the Masters (…) while being sensitive to what is beautiful” (Ernesto Nathan Rogers, 1959). 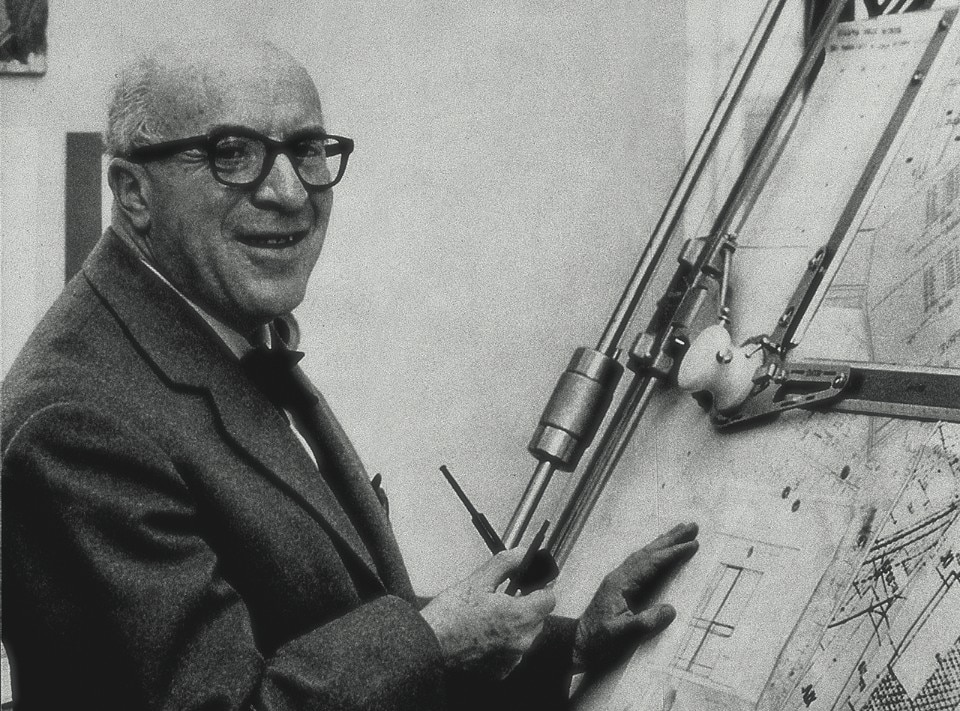 Ernesto Nathan Rogers (1909-1969) was one of the leading architecture theoreticians of the second half of the 20th century, in Italy and worldwide. In parallel, he carried out his activity as a practitioner with B.B.P.R. He cofounds the firm in 1932, shortly after obtaining his master in Architecture at the Politecnico di Milano, together with fellow students Gian Luigi Banfi (1910-1945), Lodovico Barbiano di Belgiojoso (1909-2004) and Enrico Peressutti (1908-1976).

The group’s equitable configuration and working methodologies are particularly innovative for that age. In the words of Luca Molinari and Stefano Guidarini, Banfi, Belgiojoso, Peressutti and Rogers have “a crucial cultural intuition, which allows them to overcome the handcrafted approach of the professional firm, while resolutely adopting a conception of the architect’s activity based on the collective contribution as a methodological principle”.

During the interwar period, B.B.P.R. participate as protagonists to the first season of Italian rationalism. Amongst their most important projects from this period, often realized together with other prominent figures in the Milanese scene of the time, it is worth mentioning at least the Saturday house for a married couple, a temporary pavilion for the 5th Milan Triennale (1933, with Piero Portaluppi), the Feltrinelli family house in Milan (1935) and the Heliotherapy colony in Legnano (1938). B.B.P.R.’s ability in dealing with the urban and territorial scale is witnessed by the proposal for the Regional Masterplan for Valle d’Aosta (1936-1937), presented with a pool guided by Adriano Olivetti and also including, among the others, Figini Pollini and Piero Bottoni.

Read also: A lesser known project by Ernesto Nathan Rogers and the BBPR. In 1971 Domus publishes their residential compound in Gabicce, a "village" for the holidays gathered around a green "piazza".

Second World War constitutes a relevant watershed also in the path of Rogers, who takes refuge in Switzerland, and of B.B.P.R., keeping their original acronym in spite of Banfi’s death in the concentration camp of Gusen, as a tribute to their late companion. In the years of the conflict, Rogers takes on an increasingly pivotal position in the milieu of Milanese architectural culture: between 1943 and 1945 he participates in the definition of the Piano A.R., whose principles are incorporated, though to a very small extent, into the city’s Planning Scheme, adopted in the 1950s. Furthermore, since 1945 he takes part in the discussions of MSA – Movimento Studi per l’Architettura.

The start of the cultural and material reconstruction of the chief town of Lombardy is marked by one of B.B.P.R.’s work. The Monument to the victims of concentration camps (1946), symbolically located at the main entrance of the city’s Cimitero Monumentale, is a terse and aerial structure of metal tubes, an exercise of material reduction and geometric abstraction, based on the intersection of a cube and a Greek cross. In the histories of architecture, it is often associated and juxtaposed to the compact, grave mass of Rome’s Monument to the martyrs of the Fosse Ardeatine, by Cino Calcaprina, Mario Fiorentino and others (1944-1949).

The most memorable set ups by B.B.P.R. date from the 1950s, and several of them are commissioned by the Milan Triennale, including the design of the room La forma dell’utile for the 9th Triennale (1951), and the Children’s labyrinth, built inside Parco Sempione for the 10th Triennale (1954). In that period, B.B.P.R. also takes in charge the restoration and the set up of the Museums of the Castello Sforzesco, whose visit culminates in the room dedicated to Michelangelo’s Pietà Rondanini (recently restaged by Michele De Lucchi). The most celebrated of B.B.P.R. retail spaces is probably the Olivetti showroom on New York’s Fifth Avenue (1954).  An immense bas-relief by Constantino Nivola stretches on an entire wall of the open space, making it a seminal example of synthesis of the arts, as well as the highest point of the collaboration between the Milanese firm and the Ivrea-based industrialist.

The 1950s, though, are even more importantly the moment when Rogers establishes himself once and for all as the frontrunner of the transition of Italian architectural culture from the rationalism of the 1930s towards more update orientations. He directs Domus (1946-1947) and later Casabella Continuità (1953-1965), and on the pages of the latter he publishes the seminal text about su Le preesistenze ambientali e i temi pratici contemporanei (Casabella 204, February-March 1955). The notion of “preesistenza ambientale” (which loosely translates to “environmental preexistence”) is introduced on this occasion to suggest a complex relation to history, founded on the idea of continuity, and opposing the straightforward hiatus (claimed or effective) enforced by the most hortodox interpretation of the Modern Movement.

Rogers’s writings become the subject of an intense debate at an international scale, also resulting in their well-known condemnation by Reyner Banham on The Architectural Review in 1959. B.B.P.R.’s projects, which are in many regards their transcription in three dimensions, are also under the spotlight. Of all of them, the most consistent and accomplished representation of the theory of preesistenze ambientali is undoubtedly the Torre Velasca in Milan. The tower is 106 meter height, it is supported by a technically advanced concrete structure, designed by Arturo Danusso, and yet its architectural language and its materials hint at the ancient monuments of Milan’s historical center, from the Filarete Tower to the city’s cathedral.

The same critical connection with history and the context can be found in several buildings completed by the B.B.P.R. in the following decade: the Residential and office complex in corso Francia, Turin (1959), as well as the Renovation of the Banca Finanziaria in via Verdi (1966), the Residential complex in via Cavalieri del Santo Sepolcro (1961-1968), the Chase Manhattan Bank offices in piazza Meda (1958-1969), and the Office and residential building in via Piccinni (completed 1970), all in Milan.

The activity of B.B.P.R. continues also after Rogers’s untimely death in 1969. The outcomes of his theorization, though, are to be seen above all in the careers of some of his pupils, almost all members of Casabella Continuità’s editorial board in the 1950s. Despite the diversity of their intellectual and professional trajectories, such designers as Gae Aulenti, Giancarlo De Carlo, Vittorio Gregotti and Aldo Rossi, continue and evolve Rogers’s reflections, keeping them operational at least until the threshold of the new millennium.

In the words of Gio Ponti:

I admire, or even better I love Belgiojoso, Peressutti e Rogers’s Torre Velasca. I have rejoiced that this ‘architectural shape’ has appeared in Milano, and not in any other city. The considerations about where it stands, and its capacity of 'inserimento ambientale', are of little interest for me, and make me more doubtful, than simply considering it as an architectural episode per se