“The act of transforming, deforming and collocating a design in differing places and situations originates from a desire for experimentation, more a sort of verification of the work through different examples and imaginable points of view that a form of abstraction” (Aldo Rossi) 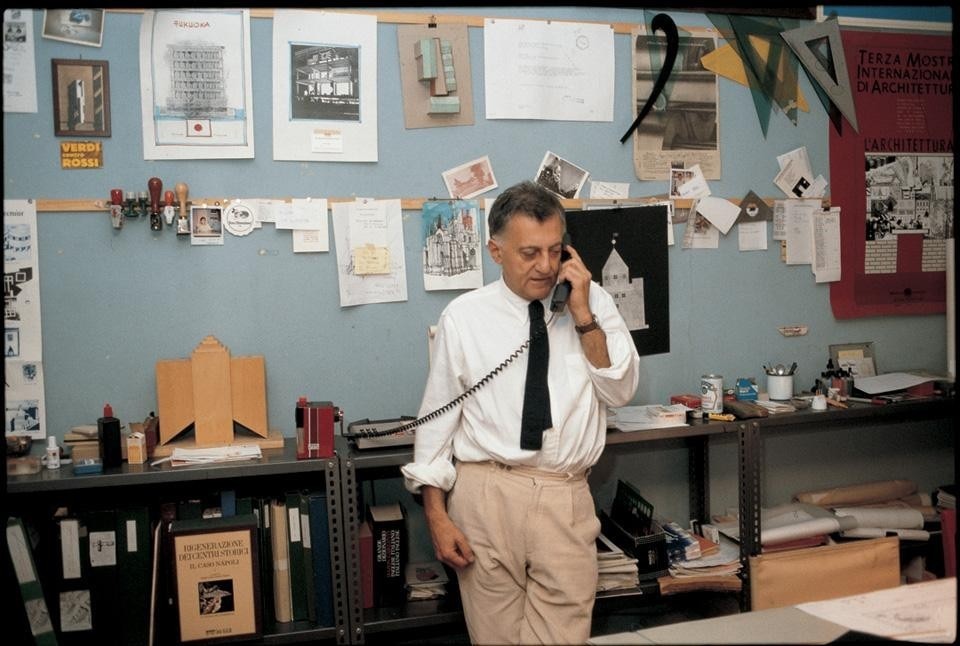 Aldo Rossi (1931–1997) was born in Milan on 3 May 1993, but when he was ten his family moved to Como (to escape the imminent war), where the young Rossi attended secondary school and then the “Alessandro Volta” archiepiscopal boarding school in Lecco. In 1949 he enrolled in the Department of Architecture at the Politecnico di Milano, where he met Ernesto Nathan Rogers, who involved him in the magazine “Casabella” (1950-1964). Rossi graduated from University in 1959, but the year before he began an apprenticeship at the firm of Ignazio Gardella and Marco Zanuso and was part of the editorial team for the magazines “Società” and Il Contemporaneo”. In 1960 he participated in the Triennale for the first time. During the 11th edition, he was a member of the commission for studies on urban suburbs (a theme that was to be dear to the Milanese architect for his entire career) and presented a project for the partial renovation of the Scalo Farini ex-train deposit.

Together with his colleague Leonardo Ferrari, he debuted with the construction of a rationalist villa for the Ronchi family and in 1963 began a long academic career both as an assistant to Ludovico Quaroni at the University of Arezza and as a researcher together with Carlo Aymonino at the IUAV of Venice.

1966 saw Rossi’s first important publication, The architecture of the city, which quickly became one of the most studied and discussed books worldwide. He was nominated chair of “Distributive Features of Buildings” at the Politecnico di Milano, he won the call for tender for the re-qualification of the town square of Segrate (1965-1967), for which he designed the “Monument to the Resistance”, and began to work on the series of “Quaderni azzurri” (blue notebooks), a collection of notes, travel journals and private reflections which he regularly produced until the 1990s and then donated to the Ghetty Research Institute in Los Angeles. In Segrate, the architect wrote, “the project encloses the square with a wall which separates it from the countryside. There are doors in the walls. The boundaries of the square are also marked by cylindrical elements, like fragments of other buildings. The main element is a monument to the partisans. This is formed by the superimposing of diverse elements and pieces of architecture. [...] the monument is conceived as a fountain on one side and a podium on the other. The podium faces the square, which rises towards the end with a wide terraced area. The edges of the terrace are marked by green. Trees and grass. The fountain is made out of reinforced concrete. [...] the wall enclosing the square and the cylindrical elements have never been completed”.

Between 1968 and 1973, Rossi worked on one of the most important projects of his career: the residential unit Mote Amiata in the Gallarate district, the masterplan of which was by Aymonino. His contribution was the design of a long building - with a length of one hundred and eighty-two metres and a depth of twelve - which is destined for council housing and which negates the relationship with the suburban context in which it is located, one which is considered to be devoid of all value. Proposed as a place of social aggregation, Rossi’s apartment block has its roots in rural residential traditions - from which it draws on elements such as the gallery and portico on the ground floor - but the layout of the individual apartments is of a principally functionalism style.

The period between the end of the 1960s and the beginning of the 1970s also saw the projects for the elementary school in Broni (1969-1071), the expansion works for the cemetery of San Cataldo in Modena (1971-1978) and for the design of the “Città analoga”: a planimetric representation of a utopian metropolis, made up of the juxtaposition of various architectural, archetypical, urban and decorative elements which were often found in designs of the time.

Actively involved in collaborations with many international universities (including the ETH in Zurich, the Institute for Architecture and Urban Studies of New York, the Cooper Union, and Cornell University), Rossi also participated in the Venice International Architecture Exhibition and in 1978 designed the Teatrino Scientifico, a small floating pavilion in wood and sheet metal which held a mobile stage and was conceived as a kind of machine for architectural experiments.

The 1970s ended for the architect with the beginning of the project for the Cappella Molteni in the Giussano cemetery, which was constructed between 1980 and 1987, and was an opportunity to work once again with his friend Luca Meda. Having become the art director for the Molteni family’s furniture company (Molteni&C and Unifor), Meda involved Rossi in what were to become his first design projects. In the space of just a few years - mainly together with Meda - he produced the “Capitolo” sofa (1981), the “Teatro” (1983) and “Milano” (1983) chairs, the “Carteggio” bureau (1987) and a number of contract projects such as the prototype chair for the Teatro Carlo Felice of Genova (1988), a building which Rossi was also working on together with Ignazio Gardella and Fabio Reinhart, and the furniture for the Bonnefantenmuseum of Maastricht (1990-1994). Along with the Brianza-based furniture company, Rossi also began collaborating with Alberto Alessi, for who he designed items such as his personal contribution to the “Tea & Coffee Piazza” (1983), which was produced in a run of ninety-nine pieces in hand-worked silver, and the “La Conica” coffee maker.

Thanks to his teaching role at MIT in Cambridge, in 1986 Rossi produced his second book, which was entitled A scientific autobiography. Despite the rapid worldwide success of the book, it was not published in Italian until the 1990s.

In this period, Rossi’s fame abroad was reaching its peak. He set up a studio in New York (in collaboration with Morris Adjmi), began the designs for the “Il Palazzo” hotel in Fukoka (1987) and for the detached homes in Mount Pocono (1988), as well as the project for the Centre International d’Art et du Paysage in Vassivière (1988). In 1990 he became the first Italian architect to receive the prestigious Pritzker Architecture Prize, which was presented to him at Palazzo Grassi in Venice on 16 June of that year.

Towards the end of his extraordinary career, Rossi dedicated himself mainly to the design of architectural complexes either constructed or designed in places as far and wide as Beirut and Stockholm, Berlin and Miami, and Frankfurt and Los Angeles.

The victim of a car accident on 4 September 1997, Rossi died before seeing the completion of his last great project, the reconstruction of the La Fenice theatre, which had been destroyed in an arson attack in 1996.

In the words of Germano Celant:

From 1959, the year of his degree thesis, Aldo Rossi’s designs have called attention to the theatrical nature of the image constructed through nature, a process which is representative of a form of design which is emancipated from all forms of technicism and functionalism