“It may not be easy, but a project always aims at suggesting something new, and whenever what is new is also good, and it corresponds to what is desired, then it can produce joy” (Cini Boeri, 2014). 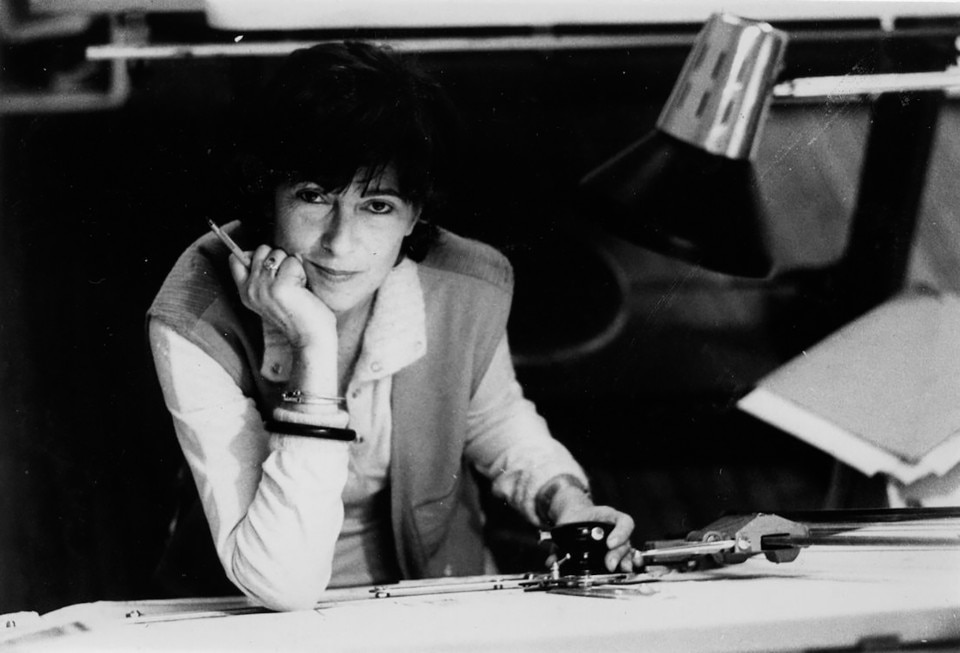 Cini Boeri (1924-2020) is a protagonist of 20th century Italian design and architecture, and one of the few female figures, alongside Gae Aulenti, to get quite a timely recognition of her contribution to the field. Similarly to other women from her generation – Anna Castelli Ferrieri, Franca Helg, Nanda Vigo, among the others – she positioned herself on the threshold between industrial design, interior design and architecture. This shared specificity also results from the field of design being more inclusive than the profoundly male-dominated architecture scene.

Boeri completes her studies at the Politecnico di Milano, where she graduates in Architecture in 1951. She continues her training at Marco Zanuso’s firm, where she is often in charge of interiors and furniture, for instance for a kindergarten in Gubbio (1960). Born Maria Cristina Mariani Dameno, she keeps the Boeri family name following her short-lived marriage with renowed neurologist Renato Boeri, the father of her three sons Sandro, a journalist, Tito, an economist, and architect Stefano Boeri. In 1963 she opens her own office in Milan, that she leads for almost six decades.

Boeri navigates as a protagonist the golden decades of Italian design, between the 1950s and the 1970s. She proves to be very receptive of that age’s zeitgeist, that she interprets through a series of brilliant and original ideas. For Boeri, as well as for Achille Castiglioni, Vico Magistretti and other masters of that time, the designer’s task is the democratization of a better life quality, through the reinterpretation and the fine tuning of objects of daily use. This is a radically non-elitist approach to the discipline: the project-product is not a luxury good that few can possess, but an essential tool, to be used in the modern life of the widest possible audience.

This is the cultural frame to such surprising objects as several seats produced by Arflex: the armchairs and sofas of the “Bobo” series (1967), with the four sizes targeting more or less agile users; the “Strip” system (1972), that can be endlessly reconfigured according to its users’ need, and which was also awarded a Golden Compass; the unsurpassed “Serpentone” (1967), a sofa that could be literally bought “by the meter”, and later rolled up or out to taste at home. The “Serpentone” probably embodies at best Boeri’s ability in combining technical innovation – it’s a one-piece object of polyurethane foam, with no core and no cover – and the reflection on possible spaces and shapes of conviviality, alternative to tradition.

The same visionary momentum, and the same sake for experimentation on materials can be found in a later project, certainly not a mass-product but rather a witticism stemming from a different cultural and commercial context. The glamorous “Ghost” for FIAM, from 1987, is a completely transparent armchair made of a single glass sheet, a solid platform constructed with the most fragile of all materials. Besides countless seats, Boeri’s production spans from office furniture, for instance for Rosenthal and Knoll, to lamps, also for Arteluce and Stilnovo, not to mention a game changing intuition from the late 1960s: in 1967, the “Partner” suitcase designed for Franzi is the very first one to get around on wheels.

The best architectures by Boeri are homes. In 1967, on the still pretty much untouched coasts of the La Maddalena island, she builds for her family the Bunker House, inspired by the savoy forts scattered along the Sardinian shores. A mysterious object, both blending in the landscape and boldly standing out from it, Boeri’s building is a holiday architecture factually, but more importantly because through its positioning and its almost primitive features it suggest its occupants an alternative lifestyle to their daily routine. The House in the woods in Osmate, Varese (1969) shows a similar tension towards volumes simplification, its blocks acquiring an almost brutalist appearance due to their exposed concrete walls. In Osmate, similarly to La Maddalena, the existing nature is a crucial reference to shape architecture, whose plan is elaborated in order to reduce to the bare minimum the number of birch trees to be chopped down.

Il progetto domestico, shown at the Triennale di Milano in 1986, is a demonstration of Boeri’s then mature reflection on the spaces of the house, that is a place for sharing but also for chosen solitude and mutual responsibility. The study presents an hypothesis of articulation of a couple’s home, where rooms though for conviviality are paired with others which are exclusive to each partner.

Read also: Cini Boeri: Designing is a joy, but also a commitment

Starting from the mid-1980s, and more intensely in 1990s, Boeri’s production thins out in terms of quantity, while it partially declines qualitatively. Her most recent architectures, such as La Sbandata house at La Maddalena (2004) and the Apartment on three levels in Milan (2008), witness of a never-tamed and always clever experimental urge, but also of the difficulty to express it through convincing built forms. While this cannot be overlooked in order to lucidly frame Boeri’s career, it doesn’t take anything away from the outstanding importance of her work. Which, it must be said, is still waiting to be rediscovered in a few less known and more sophisticated episodes – among them the fine interventions on the historic urban fabric of Ghilarza, a small Sardinian town, between the 1970s and the 1980s.