“Experience provides neither certainty or security. On the contrary, the chance for error increases. The more time passes, the harder it becomes to design better. The solution? Start from scratch every single time, with humility and patience.” 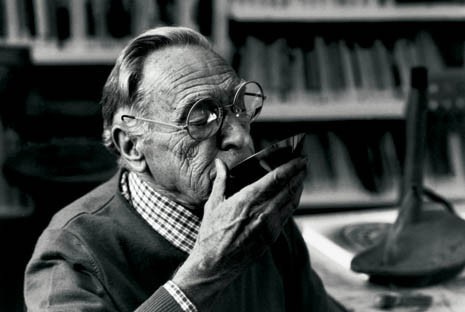 Achille Castiglioni (1918–2002) was born in Milan in 1918, the son of the famous sculptor Giannino. Particularly active in the period between the two wars, his father was to be a great influence on Castiglioni’s “plastic” approach to design. “I always begin with an idea, which I then modify and perfect in the construction stage. There is a lot of modelling in my work, also because [...] I have always seen my father work with his hands and shape the material to gradually create the desired shape.”

After having graduated in Architecture from the Politecnico di Milano in 1944, Castiglione almost immediately became a member of the layout committee for the 8th Triennale (1948, in the section dedicated to mass-production furniture) and would be a regular component. In 1951, for example, he was made responsible for the illumination for the 9th Triennale, and for industrial design for the 10th in 1954.

In the meantime, he became an artistic consultant at ANIE – the National Association for the Electronic Industry (1949-1980) and RAI, the Italian Radio and Television Network (1950-1959), for which he created some of his most important projects.

A founding partner of ADI, the Association for Industrial Design, in 1956, he became an executive member in 1963.

In the 1960s, Castiglioni also began teaching, qualifying in 1969 and taking a number of chairs - principally at the Turin Polytechnic and his own alma mater – including artistic design for industry, architectural composition and interior design and furnishing.

In the meantime, he set up his own professional firm, where he worked together with his brother Pier Giacomo (who was the older of the two, gaining his degree in Milan in 1937) until the premature death of the latter in 1968.

The beginning of the collaboration between the two brothers saw the creation of designs even before the brilliant Achille – whose ideas had already been published in the most important magazines of the period – Domus in 1943 and Casabella in 1944 – had completed his degree.

Together the duo was responsible for the expansion of an elementary school in Lierna (1938), Villa F in Abbadia Lariana (1943), and the first documented design project, the “Pomolo” aluminium door handle (1945), which was presented at the furnishing exhibition on popular furnishing organised by RIMA in 1946 together with the “Camillo” set for hotel rooms, which explored the potential of steam-bent plywood.

The 1940s were, for Castiglioni, a period of experimentation with form, techniques and materials, aimed at experimenting with a process of integral design, in which importance was given to collaboration with graphic designers such as Max Huber (with whom Castiglioni began a long-term working relationship) and with colleagues such as Erberto Carboni. The best results from this experimentation was seen in the 14th national radio exhibition held at the Palazzo dell’Arte in Milan (1947), commissioned by ANIE, as well as the first contracts regarding exhibition layouts for the RAI stand at the 26th Milan Fair (1948) and the RAI exhibition and relative pavilion at the 27th Milan Fair. Built in record time, the pavilion is supported by a structure in reinforced cement on which the series of ample ribbon windows is built, a number of which are tiled in order to avoid unpleasant reflections of sunlight. They are designed as display windows, thanks to the light sources which transform the pavilion itself into a landmark for the fair. The theme of light was to become one of the fulcrums of the design style of the Castiglioni brothers, seeing the creation at the end of the decade of “Tubino” (1949), the first in a long and successful series of lamps which proved to be fertile ground for their inventiveness.

In the 1950s, the studio’s activities followed two parallel lines. On the one hand, Castiglioni’s architectural career was marked with a number of significant successes. The Padiglione della Permanente (1952-1953), a studied reflection on the theme of the calibrated insertion of a new building into the historical Milanese landscape, and the church of San Gabriele Archangelo in Mater Dei (1956), characterised by the predomination of materiality in the form of surfaces in terracotta and rough plaster. On the other, focus was placed on the application of the theme of redesign. Traditional objects and tools, identified and subdivided into classes according to functional type, were redesigned with the aim of updating them from a communication point of view. This saw the creation of the “Leonardo” and “Bramante” tables (1950) for Zanotta, which re-interpreted the figure of the trestle. In the first case, inspiration came from the study of the carpenter's workbench, while in the second, the supports for an old work table for artists became the cue for the creation of vaguely anthropomorphous legs. This period also saw the celebrated “Mezzadro” (1957), which reworked the seat of an early twentieth century tractor, and “Sella” (1957), the seat that the Castiglioni’s designed to be intentionally uncomfortable as it was conceived as a telephone stool aimed at encouraging the user to keep their calls short.

It was however in the sector of interior design and trade fair set-up that saw the Castiglioni’s reach an unequalled peak. The Sala Movil (1953) and the Chemical Products Hall (1954, in collaboration with Bruno Munari) at the Montecatini Pavilion; the section on Industrial Design at the 10th Milan Triennale (1954), which was illuminated by gigantic suspended disks which seemed to float in the air; the ENI pavilion (1955); the cinema for the Rizzoli family (1956); the environment, at the “Colori e forme della casa d’oggi” ordered at Villa Olmo in Como, which was to be an epic turning point for domestic design; the Splügen Braü brewery (1960), which inaugurated the new decade and which took the form of a restaurant rail-car exhibiting tailor-made technology and objects.

See also: A brewery by the Castiglionis

The death of Pier Giacomo was a tragic point in Achille’s career, who from that moment on focused on the continuity and duplicability of environments, moving ever-further into the sector of Industrial Design. He repeatedly designed the layout of the Flos showroom in Corso Europa (with various collaborators, including Italo Lupi, between 1968 and 1990), the formula for which, based on artificial light, was repeated elsewhere; he invented a new type of lamp with “Parentesi” (1971), for which he also designed the packaging; he was celebrated in solo exhibitions which confirmed his international importance, as was the case with the travelling exhibition “Achille Castiglioni Designer” (1984-1986).

Over the course of his long career, Castiglione received - either alone or together with his brother Pier Giacomo - an endless number of awards and recognitions, with the first coming as early as 1947, when the Triennale presented him with the bronze medal. This early victory was followed by an impressive number of Golden Compasses. In 1955 he won with the “Luminator” lamp, in 1960 with the “T12” chair; in 1962 with the coffee machine “Pitagora”; in 1964 with the beer pump “Spinamatic”; in 1967, with a set of headphones for simultaneous translations; in 1971, with “Parentesi”; in 1979 he won a further two awards with the famous “Parentesi” lamp and the “TR15” hospital bed, right up to 1984, when he won an award for the “Dry” cutlery, and in 1989, when he received an honourable mention.

Achille Castiglioni died in Milan in 2002.

In the words of Italian architecture critic Sergio Polano: "Beyond examining the ethics of the raison d’etre of 'things', Castiglioni’s work is also characterised by a need for narrative, a confidential expressive inspiration (often sardonic and amusing), not so much in terms of self-referentiality (although from a certain period onwards this was present), as an intrinsic richness and linguistic appropriateness."