Ninety photographs of nudes draw the Chinese photographer back to revive the first monographic show in Italy voted to his career. 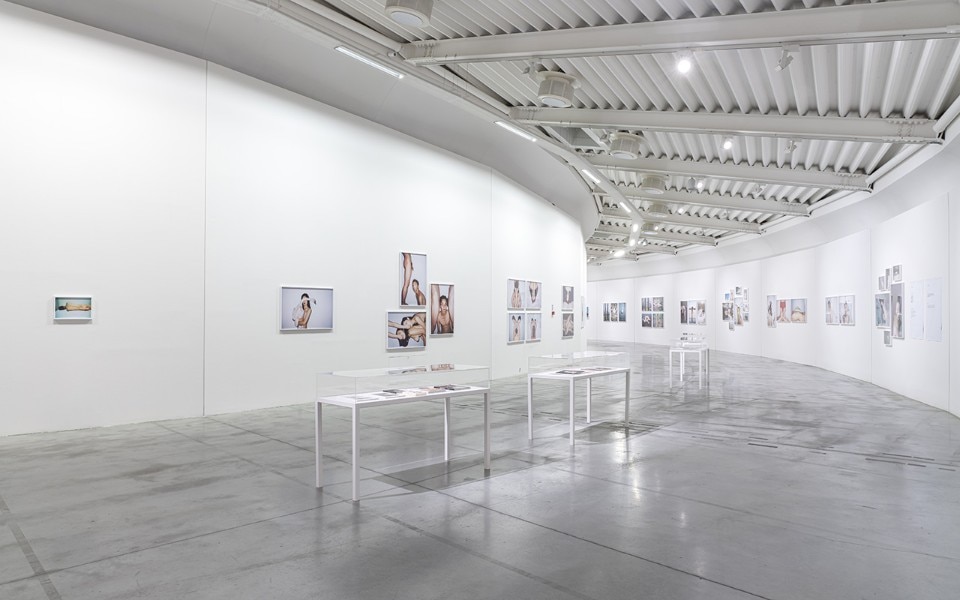 Nudi (Nudes) at Centro Pecci could possibly be read as a call-to-arms, to shake us out of the obsession with simulacra and the reign of the visible that defined this period, and to attend to the inherent “questioning” born out of a dissensus oeuvre, beyond even the intentions of Ren Hang (Chang Chun, March 30, 1987 – February 24, 2017). When read as indicative of the exhibition’s contents, however, this initial statement raises more questions than it answers. In Prato, the Chinese photographer is exhibited for the first time in Italy with a selection of 90 photographs accompanied by a wide selection of rare books on his work.

As such, it’d be a curious choice to structure the beacons of this post-lockdown exhibition around a quotation by French philosopher Jacques Rancière: “The essence of politics is dissensus. Dissensus is not the confrontation between interests or opinions. It is the manifestation of a distance of the sensible from itself. Politics makes visible that which had no reason to be seen.”

Rancière’s theory comes from an understanding of Kant’s Critique of Judgment and his suggestion that aesthetic judgments suspend the capacities of both reason (morality) and understanding (knowledge). Ren Hang’s photography echoes critical of the contemporary moral division of art between “socially-engaged” work and “testimony,” both of which instrumentalize art in favour of ethics, especially if contextualized within the actual Republic of China welfare. In China, the concept of the nude cannot be separated from pornography, and the nude as a genre is not recognised in art history. This is why Ren Hang’s photographs were often censored.

Hang’s Photography is rather that which allows us to think contradiction: both the idea of nude iconography as autonomous or unsullied by morality (pure aesthetics), and the simultaneous sense that the work points beyond itself (politics).

Ren Hang is known above all for his research on the body, identity, sexuality and the relationship between humans and nature, with new generation, free and rebellious Chinese youths as the protagonists. At the same time his way of catching human body is today becoming political, exploring identity, gender, media manipulation, and issues of social and economic class. For Hang, the camera came into its own as an instrument that could document and make widely available pictures of non-events and compositions that, unlikely, were never intended to hang on a museum wall. For the most part nude, his subjects appear on a roof among the skyscrapers of Beijing, in a forest of tall trees, in a pond with lotus flowers, in a bathtub among swimming goldfish or in a bare room, their faces unmoved and their limbs bent into unnatural poses. Swans, peacocks, snakes, cherries, apples, flowers and plants are used as absurd props but ones that have great evocative power.

Visitors enter Centro Pecci spaces and participate in ritualistic frameworks or simple instructions that Hang has remotely prepared, whereupon portraitures come into being by actually executing a series of actions. The significance of how these works emerge resides not within the act of giving a visible form to nudity – rather, it consists in the construction of relationships that resemble invisible threads.

Extremely rare and special are those photos we unexpectedly slip into a dreamscape while encountering the eyes belonging to skinny, naked men and women. They’re ineffable. How do you relate for someone, this feeling of falling into such a vivid and suggestive cue to the unconscious? How is it like entering sections of Hang’s several series?

Many of Hang’s photos centre on the gesture of physical exchanges between strangers. The paradoxical element to his assigned roles is amplified in China, a country and culture that often regards itself as the “ultimate host.”

Hang worked on the importance of an intimate encounter between artist and spectator. Due to the directness of exposed bodies, the event of seeing takes place exclusively “one on one,” and is not viewed by observers while his intricated poses takes place. This is due to Hang’s personal preference for intimate and personal exchanges between strangers. Within the museum, this involves Hang and visitors, who may engage with him in an invisible conversation or even feel selected to join his gaze in a private view or shared even hypothetical afterhours evening of oneiric, daydream dialogues and, at some point, fantasizing.

Read Also: The Italian city of Prato is reimagined as an “urban jungle” by architects, scientists and photographers.

Although often provocatively explicit in the display of sexual organs and the poses, which at times refer to sadomasochism and fetishism, Ren Hang's images are difficult to define, shocking and at the same time pure, permeated by a sense of mystery and formal elegance that appears poetic and, in some ways, decadent. The bodies of the models - which are all similar to each other, slender, hairless, and with very pale skin and black hair, red lipstick and painted nails for the women - are transformed into sculptural forms where gender is not important. Rather than arousing desire, these images seem to want to break the taboos surrounding the naked body. To be conscious of the mutual interdependence between the whole nudes, drawn under pressure by Hang’s camera, is also to be aware of the temporal relationships of cause and effect, such as dissensus and the in-between imagery of a primordial humankind.