With a digital camera, hidden in the back of a car, Armando Perna managed to elude the widespread control system that the parastatal Hezbollah military exercises over Dahiye. 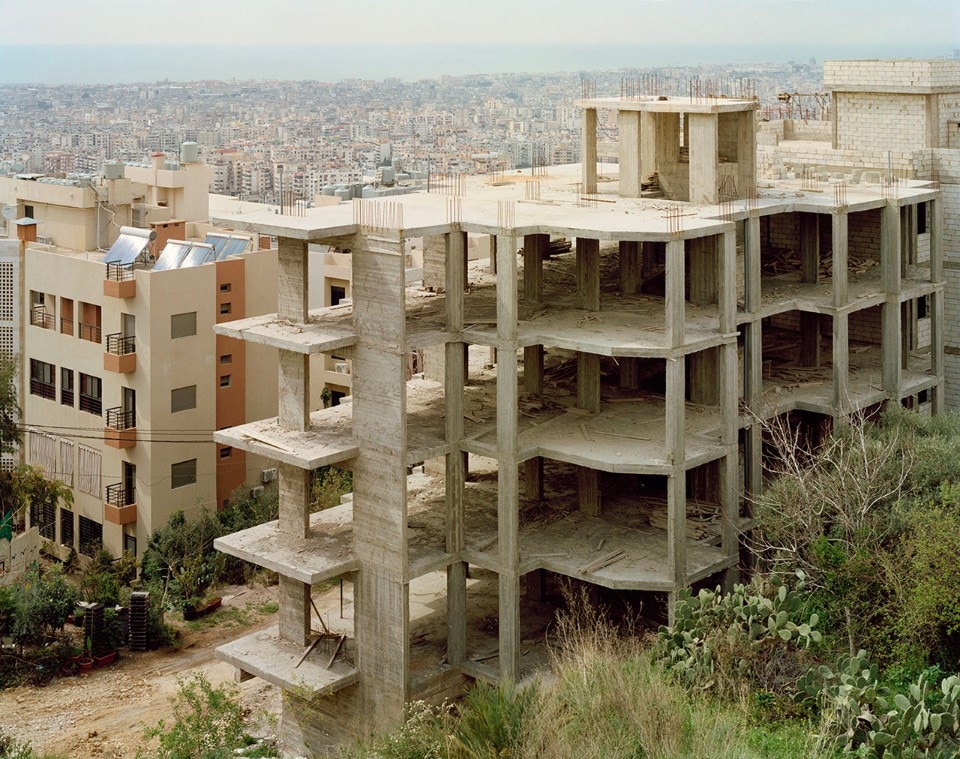 “I went to Beirut for the first time in February 2013. Because of its role as a city-crossroads, it was to be my first stop on a long process exploring Middle Eastern countries but I keep going back. I immediately realised that it’s a key place from which to observe the dynamics that are developing on a global level.” We met Armando Perna (Reggio Calabria, 1981) in Polignano a Mare, near Bari, the city where he chose to live and work just over a year ago, after a prolonged period in Milan. The Fondazione Pino Pascali is currently holding a solo exhibition entitled “Dahiye: The Southern suburbs of Beirut”, promoted by the Planar collective, of which he is a member. It focuses on his photographic research and mapping work in the southern suburbs of the Lebanese capital. With a site-specific installation, the exhibition showcases a small part of the complex visual exploration conducted by Perna in recent years and for which he was a 2014 finalist for the prestigious Fotobookfestival Kassel Dummy Award.

“This work was all-consuming because I accompanied the photographic project with an in-depth study of essays and publications that still continues. I started with Beirut, Libano. Tra assassini, missionari e grands cafés, published by the journalist Riccardo Cristiano in 2008. It was a crucial first guide to an understanding that Beirut was historically a cosmopolitan city, a place of dialogue and, at the same time, one of contrasting religious identities and mixed communities. It is an urban area with a population of approximately two million, made up of Christians, Sunnis and Shiites, and has a huge presence of Palestinian and Syrian refugees, especially since 2011, when conflict broke out in Syria. Other key references were studies conducted by Samir Kassir, Mona Harb, Mona Fawaz and Estella Carpi.”

Beirut is historically a cosmopolitan city, a place of dialogue and, at the same time, one of contrasting religious identities and mixed communities.

The photographs were taken with a view camera and a digital camera, hidden in the back of a car. Using this precarious and makeshift system, the photographer managed to elude the widespread control system that the parastatal Hezbollah military exercises over Dahiye, effectively preventing any kind of photography or urban reading of the areas where Palestinians and Syrians live. “My first months in Beirut – Armando Perna tells us – were spent getting to know the city. I thoroughly analysed its appearance and functioning, focusing mainly on the outer margins. I always slept in a hostel in Jounieh, a city north of Beirut populated by Maronite Christians. I travelled every day from there to the extreme south of the city, Dahiye. They are two separate and incompatible realities, worlds apart geographically and culturally. No Jounieh inhabitant would ever go to Dahiye and vice versa. It was my intention to develop an overview and then focus on specific zones and issues so that every piece I gathered would gradually find a place in this complex urban puzzle made of enclaves and divisions. As an outside observer, I felt a pressing need to connect the different parts, taking Dahiye as a point of reference to experience the different, seemingly opposite, dynamics that develop in the city, to the detriment of public space. I am thinking of the downtown enclave where the post-war reconstruction process is contracted entirely to a private company called Solidere, effectively annulling the State function.”

The first explorations were accompanied by a large group of shots, taken with the view camera and a long, measured time. These moments of reflection enabled him to familiarise himself with the cityscape. Every journey was taken alone and his trips to Beirut became a routine and integral part of his existence. He refined his gaze and technique over time, overcoming the restrictions imposed by the actual and extreme conditions with a view to exploring the difficult relationship between the authorities, control strategies and urban space. “I didn’t want to sacrifice picture quality and, eventually, despite having no direct control over the camera hidden in the car, I noticed a totally unexpected formal rigour and attention to the composition in the pictures. The long process I adopted enabled me to also record this part of the city effectively, with accomplished images.”

The photograph becomes action in reality, a responsible practice that reasserts the artist’s civil role, ever less valued by the newer generations. This pressure has permeated Armando’s work since he took his very first steps in the world of photography, via exchanges with one of his first masters, Giovanni Chiaramonte, who spoke to him “of the artist who is able to position himself on the edge of the precipice and gaze into the abyss, glimpsing what others fail to see. Only in this way can the photographer, via his work, raise awareness, addressing and casting light on issues that are inconvenient or mostly ignored.”

Julio Cortázar springs to mind when, in Around the Day in Eighty Worlds, he evokes the poet’s necessary laterality and alienation. Cortázar quotes the Edgar Allan Poe poem Alone: “From childhood’s hour I have not been / As others were, – I have not seen / As others saw, – I could not bring, / My passions from a common spring. […] And all I lov’d, I lov’d alone.”