“Lichtgrenze”, by Christopher and Marc Bauder, light artist and director respectively, to celebrate the 25th anniversary of the fall of the Wall, is a tale of light 15-km long walking through Berlin. 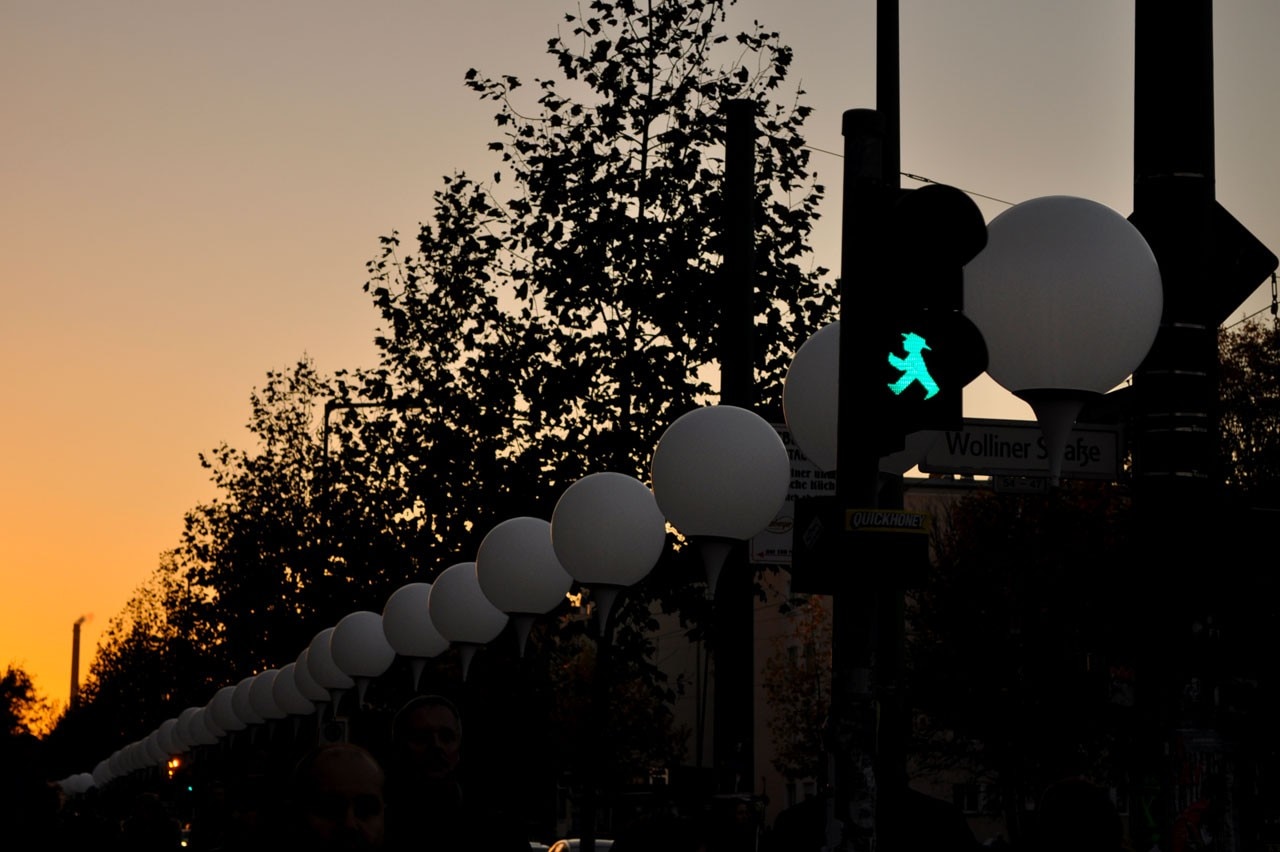 Niemand hat die Absicht, eine Mauer zu errichten” (“No one has any intention of building a wall”) are the memorable words spoken by East Germany’s first leader, Walter Ulbricht, when GDR soldiers were already working by night to block off West Berlin.
Fifty-three years later, on 9 November 2014, Berlin celebrated the 25th anniversary of its freedom, won when that very Wall was brought down in a process that changed the country’s destiny and, more specifically, the face of the city. The happy young people present were able to cross a barrier once made of concrete but now invisible on foot or by bicycle, accompanied by music, exhibitions and films.
“Lichtgrenze” means light border and is a 15 km-long light installation devised by Christopher and Marc Bauder, light artist and director respectively. The experiment was developed over time with the involvement of others by Robert Henke of the University of Hanover, who co-designed the completely biodegradable lights.
The fine and flexible carbon-fibre light supports were manufactured in many countries, turning this into a global project. They also made it a versatile one, as the workshop that assembled the metal totems is also responsible for recycling most of them, a task it already performs for similar materials.
In an interview, Christopher Bauder spoke of his desire to physically revive the memory of the barrier with something transient and to see it demolished again on 9 November. The focus was to reference it with something lightweight that would be light and airy, and the choice fell on 8,000 balloons, blessed with their own degree of freedom and so a clear contrast to the hardness, weight and size of the Wall. Stories of the life lived during the years of division were posted in public-transport stations, illustrating a time when two strongly contrasting political influences conditioned growth on the two sides of the city, one Western and the other pro-Soviet.

Bornholmer Strasse, the northernmost border crossing, was a gate allowing citizens of the Federal Republic to cross to the East while blocking the flow in the opposite direction. From the bridge, you can see the tracks running parallel to a long line of balloon totems that disappears into the dense and coloured autumn trees, merging with the city of the modern and heavy infrastructure.

Mauerpark invites you along a suspended passageway over thick, yellowed vegetation, linear and always changing, to a rise that, 25 years ago, formed a concrete barrier – albeit with the Berliner Fernsehturm, a TV tower that became a landmark in the German capital, always visible in the background, like the needle of a compass.

The Wall Memorial on Bernauer Strasse was turned into a 1.4 km open-air exhibition displaying the faces and photographs of remarkable escapes, surrounded by the still visible signs of fortifications, and leading to the steps of the now rebuilt church of Reconciliation. The passing of the years is marked on the sides of the buildings that faced the Wall, now reconstructed in this section with metal rods that permit easy passage, evoking the border but crucially offering a chance to cross it.

Brandenburg Gate. The hub of public events and the core focus, this was not easily approached and traffic was blocked long before the event commenced. This is where the symbols of the revolution were presented, the music continued throughout the evening and the first balloon flew into the sky on 9 November 2014.

Potsdamer Platz. The scenario of stories belonging to a now different city with a complex urban programme and where differentiated paving highlights the previously fortified line. Potsdamer is a hollow square beneath which the metro travels and dominated above by the recently built skyscrapers that seem to dictate the new city’s rules of living, building and design.

Checkpoint Charlie. Two sides acting as a reminder of the strict rules in the West and Soviet sectors. A shed with a level crossing conveys the weight of a wall in terms of significance and bitter consequences when there is no way in or out.

East Side Gallery. Here, the balloon was an object possessed by youth and seemed to convey the mission of this constantly changing space. The presence of the Wall is still felt here but it is unrecognisable as it runs along the River Spree, in a painting 100 artists long.

In these seven key areas crossing Berlin from north to south, 8,000 lit balloons gave the space over to the history of those who lived through those times, who tried to cross to the other side and those who remember the time when they thought they would never again embrace someone on the other side of the former barrier that is now a boundary of just light. In the reunified Berlin, different generations came together in a celebration of a victory that began with a peaceful revolution in Hungary and spread to the centre of Germany thanks to courageous people who took to the streets to demolish boundaries, opening the floodgates.
© all rights reserved